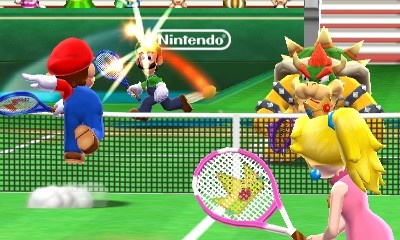 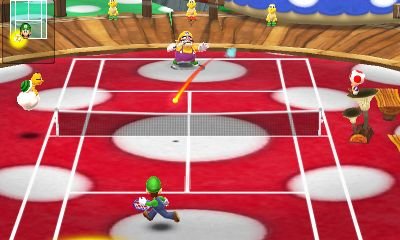 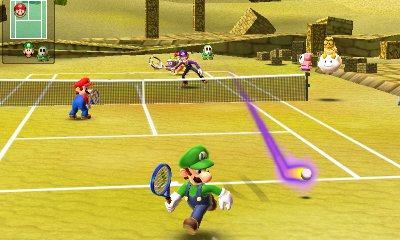 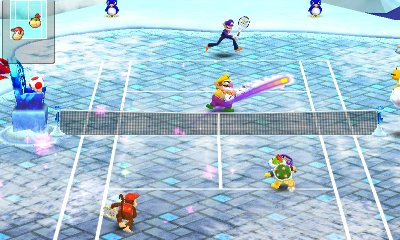 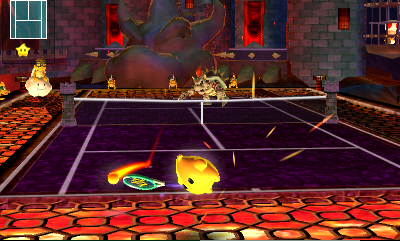 Tennis is a sport that is popular and known all around the world. Fans love watching their favorite players hit that green and white ball back and forth and back and forth in a seemingly endless rally. However, tennis hasn't reached baseball, football, or basketball levels of popularity in the United States. It is a watched sport that many adore here, though, on this side of the world. Mario and his Mushroom Kingdom cohorts are once again stepping onto the court in the first handheld Mario Tennis title since Mario Tennis: Power Tour. While the RPG mode that the portable offerings are most known for has been omitted from this installment, it has been replaced by a series first, online play. Does online and the game's other features make Mario Tennis Open serve up and ace or get unlucky and get a double fault?

There are two main draws to the single-player content of Mario Tennis Open-- Tournament and the Special Games (more on the latter later). Tournament mode is no stranger to veterans of any sort of tennis game. Instead of the traditional three tournaments of past Mario Tennis titles, players must fight through the ranks of four individual, progressively more difficult tourneys. When you beat the final match of the Champions Cup, you unlock not only four more tournaments but you receive a star for the character your completed the Champions Cup with, giving them greater abilities. Tournament mode can be played in Singles or Doubles with a computer-controlled partner, though you can only get a star character through Singles play.

For every single-player match you finish, you receive a random outfit part for your Mii. These parts do not unlock for use-- they are only available to buy with coins earned through, and only through unfortunately, Special Games. There are four forms of outfit pieces to purchase including rackets, shirts/shorts, wristbands, and shoes. You can also unlock full costumes like the Mario and Peach costumes for taking care of certain in-game tasks. Each outfit part bestows your Mii with status attributes like better serving power, acceleration, running speed, and spin of the ball, for starters. Experimentation with different parts make for some enjoyment. Plus, I found that unlocking new pieces for my Mii to wear and customizing my little avatar version of myself to be massively appealing. Your mileage may vary, however.

As stated, Special Games are the second main draw of the single-player experience. Unlike the GameCube's (and then later on the horribly controlling Wii port) Mario Power Tennis which had an abundance of mini-games to excel at, Mario Tennis Open only has a pitiful amount of four games to try out. Sure, the majority have four levels to try out, but when the only means of gaining coins is to play through this quartet of Special Games, it gets old fast. And because the fastest way to earn coins is through participating in the Galaxy Rally Special Game, you will get sick of being forced to grind for coins in a fast fashion.

Regardless, the Special Games available are pretty good for the most part. The popular Ring Shot makes its glorious return, but there are three new games to accompany it like Super Mario Tennis. In this game you hit the ball against a wall that shows a side-scrolling 8-bit Super Mario Bros. level. Hitting coins and enemies gives you more time on the clock. The aim of the game is to reach the flagpole before all three of tennis balls have been lost. The aforementioned Galaxy Rally has you rallying shots with a Luma. The goal is to successfully reach a certain number of rallies while avoiding the pits that house a giant black hole which will gobble up your errant balls. You only get three balls to work with, so make them count. Lastly, Ink Showdown has three Piranha Plants firing out tennis balls for you to return. However, there is a character on the other side who wishes to hit them back. If you get the required amount of balls past this character, you win. Making this more challenging is that sometimes a Piranha Plant will shoot out a ball of ink. Not eliminating this threat immediately will cover 75% of the screen with ink. Like I said, coins can only be earned through these four games which is idiotic to me.

Coins should also be earned through playing online matches, a new feature to the Mario Tennis series. As it stands, you can play either with friends or against regional strangers. Either way, your options are limited. With strangers, you can play short first-player-to-seven games or 2 game, 1 set matches. Winning nets you a Victory Medal. Unfortunately, there seems to be many sore losers online, even in the exceptionally short tiebreaker games. This means you don't get a Victory Medal (the only way to unlock three Mii costumes) every time someone disconnects. I mean, seriously? You can't stay a minute and take your loss like an adult? Which brings me to another questionable move by Camelot, the rating system. At the conclusion of each online random match, you earn or lose points depending on how you performed. Any system where you can lose points even when you win the match is absolutely asinine. As for other parts of the online, there are online leaderboards to try to reach the top of, but this is a time waster and nothing more.

As for the actual gameplay online, tennis games demand pinpoint accuracy and quick reflexes. When the game lags ever-so-slightly, that throws a wrench into the equation and makes returning high strength, high speed serves a crap shoot. Also, I wish there were two modes for random matches: one for overpowered Mii characters and one for the traditional Mario characters. As it is, most players online go with their Mii which makes the Mario all-stars essentially irrelevant. Thankfully, online play isn't something that really appeals to me. I've always been a local type of player, but keep these flaws in mind if online play excites you. Nintendo has shown that they are open to patches, so it's anyone's guess if such changes to the online could (and should) happen.

Mario Power Tennis featured power shots that some argued ruined the pace of matches. Those have been disposed of and in their place are Chance Shots. Chance Shots occur depending on how the ball is hit by your opponent. If you dive for a ball and hit it with the tip of your racket, generally your opponent will get the opportunity for a devastating smash to drill the ball down your side of the court's throat. There are five types of Chance Shots: red, blue, purple, yellow, and white. Red Chance Shots allow you to strike the ball with a powerful topspin. For power characters, a fully charged red Chance Shot can send their opponent pushed backwards from the sheer force of the shot. Blue Chance Shots defy the laws of physics completely with a crazy horizontally arced slice shot. These curve in such a ridiculous fashion that they can trip up even the most professional player. (They also twirl the player who hits the shot around like a tornado.) Meanwhile, purple Chance Shots offer the opportunity to hit a stunning flat shot which has the highest velocity of any other shot. Then there's the yellow Chance Shot which when hit lobs the ball to the back of the court, great for those adversaries who play close to the net. Finally and conversely from lob shots, white Chance Shots deal out a drop shot which falls up close and near the net.

Sometimes it feels like you're playing a game of Simon Says with Chance Shots. You run to each highlighted circle on your side of the court and perform the type of shot specified. However, sometimes hitting the Chance Shot specified isn't the best means of play. Occasionally, you will want to trip up your opponent and confuse them completely. For instance, maybe a shot returned by your foe reveals a red Chance Shot advantage near the net, but it might be easier to just slam the ball away from your opponent with a well-placed flat shot. Additionally, when you start a Chance Shot, the aura around your character will brighten, giving your enemy (or enemies) a signal that you are about to try a Chance Shot on them. So Mario Tennis Open can be as close to Simon Says or as far away from that kids game as you'd like.

Mario Tennis Open offers control options for beginning players as well as people more comfortable with the game and series. During play, the touch screen can be used instead of the buttons to choose the various types of color-coded shots with a tap of a finger. Neophytes can also hold the 3DS up vertically to enter the dynamic view where the camera is directly behind the player, their character moves to the ball automatically, and all that is needed is shot input from the player. Dynamic view can be turned off completely via the Options menu in the Clubhouse. While the dynamic view is nice, it is no substitution against a pro player.

Mario Tennis Open borrows a lot of assets from the GameCube version of the franchise. Even though you hear Toadsworth's voice as the umpire, Toad is actually the one who sits in the umpire's chair... or cage, depending on the court. The umpire also no longer announces each characters' name when they score. It's either "server" or "receiver" now. That just screams lazy. As for the visuals themselves, character animate wonderfully, the ten courts like Mushroom Valley, Wario Dunes, and Mario Stadium are beaming with vibrant color and impressive graphical effects like sunlight shining down on the DK Jungle wood court, and the 3D effect-- while not as pronounced as other 3DS games-- does its job well. Though, you won't be amiss if you turn the system's 3D slider all the way down. The heavily progressive rock-driven music by Motoi Sakuraba is filled with incredibly catchy tunes and some familiar ones as well such as the must-have for a Mario game, the Super Mario Bros. Main Theme, and a duo of songs from the Nintendo 64 version of Mario Tennis, heard in the Star Open tournament matches. Mario Tennis Open doesn't blow the doors off the joint in its presentation, but it is much better than passable.

Even with its less-than-stellar online options and netcode with randoms, its unfortunate omission to include earning coins in other modes aside from the Special Games, and its relatively sparse single-player modes, Mario Tennis Open manages to be another worthy installment in the long-running tennis franchise. It doesn't outdo the Nintendo 64 or GameCube installments, but it does hold its own. Collecting and then purchasing new items for your Mii is quite addicting, playing against friends with one 3DS card between the two, three, or four of you is terrific, hopping online to battle a friend is always invigorating, unlocking new characters via Special Games or through capturing QR codes promises more additional characters to play as in the future (though recolored Yoshis are currently the only offerings available), and the tremendous soundtrack make for a superb game. The inclusion of Chance Shots add some entertaining strategy and variety to the gameplay, and it makes for some stunning and highly satisfying rallies. For those who would spend most of their time through online randoms matches, you might want to hold off on this game. For everyone else, grab a racket, pull on your wristbands, and get ready to spend some time on the court with Mario and friends.
Review Page Hits: 0 today (97 total)
mediahook