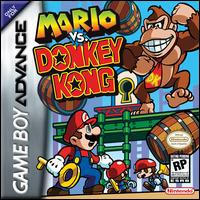 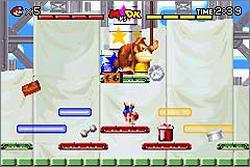 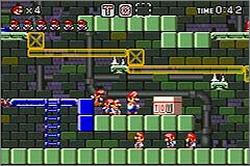 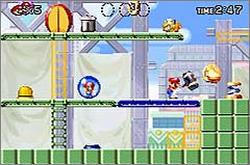 When I was younger, the local 7-11 down the road from me had the original Donkey Kong arcade game in the corner of the store, near the slushy machine. Every day after elementary school, I'd race my Huffy banana-seat bike down to 7-11 so I could hang out with my buddy, eat 5 cent candy, and play Donkey Kong until my hands were bleeding.

Nintendo wants me to revisit that feeling. Finally. After all these years of me wishing for a "Mario vs. DK" rematch, Nintendo releases Mario vs. Donkey Kong; a game built on a basic classic arcade premise, but given a nice upgrade for 2004.

Mario vs. Donkey Kong finally sees the rematch of Mario the Plumber against his arch nemesis, Donkey Kong. It seems that Mario has been making new Mario Dolls and selling them to toy stores, and those toy stores are selling out. The game starts as we see Donkey Kong, at home surrounded by piles of bananas, clicking the TV. remote, bored. He stumbles across the news flash that the Mario Dolls are selling like hotcakes, sees what the doll looks like, and instantly falls in love with the toy. The problem is, he doesn't want just one; he wants all the toys for himself. So, being a smart monkey, he breaks in to the factory, and steals all the toys. During his escape, Mario sees what DK has done, and takes off after him on foot - his new mission to stop Donkey Kong and retrieve all the Mario Dolls.

With that, so begins an endless amount of running, jumping, climbing, tossing, hammering, grabbing, and more.

Mario vs. Donkey Kong is basically the original Donkey Kong game, only with added game play elements. Each level is split into two sections. The first section requires you to retrieve a key, and open the door to the second half of the level. Once you get the key, you can open the door, and proceed. While you are trying to score the key, you must avoid enemies, and trigger buttons that make corresponding colored ramps and ladders appear. For example, if you have a red button and a blue button, stepping on the red button will make red ramps and ladders appear. If you step on the blue button, the red platforms disappear, and blue ramps and ladders appear in other places. It is this puzzle element that requires using a little fast-thinking strategy so that you can manipulate all the buttons and complete the levels with success. Once you open the door with the key, the second section of the game opens up, and requires you to retrieve one of the Mario Dolls, also scattered within the level. Saving the Mario Doll ends the level, and you move along to the next level.

Mario vs. Donkey Kong is split up into 6 worlds, with 6 missions per world. The final 6th mission is an end-boss style battle with Donkey Kong himself. Classic battles ensue. There are also two hidden worlds that you can open up, giving you a total of 12 more missions to complete. These hidden worlds are opened once you beat each level under a certain amount of time, which is where the games replay comes into focus.

Graphically, this is one impressive little looking game. Mario is rendered in fantastic 2 and 1/2 D, and using the same rendering technology that RARE used for the Donkey Kong Country games. In fact, DK looks exactly the same as he does in the DKC games, but it's really fantastic to see Mario running and jumping in all his pre-rendered glory. Mario also has moves that cover all of his platform games from the past; picking objects up and tossing them (Super Mario 2), Climbing on vines (much like Donkey Kong, Jr), as well as high jumping and other impressive moves (Super Mario 64), and including new moves, like doing handstands, and walking on his hands. This little Mario busts moves like nobodies business.

The sound is also very well done. Nintendo wanted to show off all the voice compression and music they could squeeze into this cart, and Mario yells, calls, and won't shut up the entire game. I love that he's constantly talking and yapping away, as it draws me into the game more. It actually sounds like he's having a fantastic time while saving his toys. The music is fitting, and, occasionally catchy. I found my head bobbing more than a few times.

Players will want to revisit this title so they can finish each mission under a specific time. Players who beat the clock will unlock the extra 2 worlds; giving them 12 more levels to master.

Mario vs. Donkey Kong is a fantastic classic arcade game with new improvements for 2004. It brings back my nostalgia for when I was 12, endlessly playing the original Donkey Kong, wondering when Mario will get to take on his arch enemy once again. That time is now, and Mario vs. Donkey Kong re-establishes an arcade classic competition of Mario vs. his big Monkey enemy.

Mario vs. Donkey Kong is a very worthy addition to your Game Boy Advance library.