The first collection of one of the web's best comics 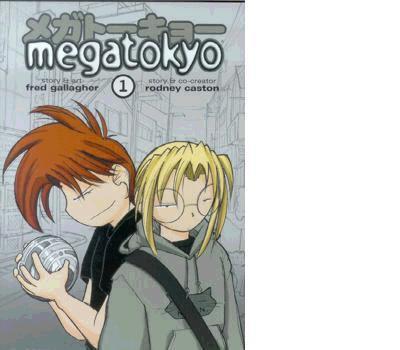 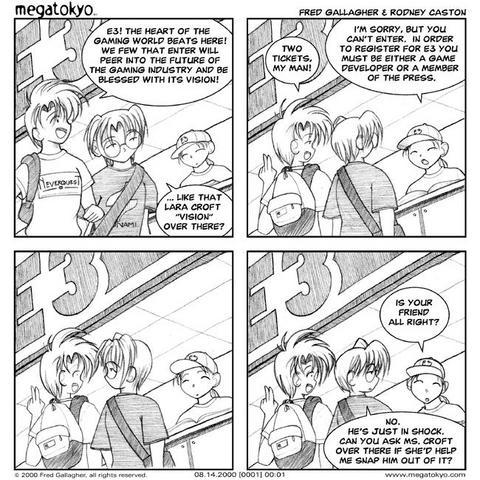 In the summer of 2000, Rodney Caston finally convinced his friend, Fred Gallagher to start working on a webcomic titled Megatokyo. Caston would write the scripts, and Gallagher would do the art. The basic idea was simple: two American males, Piro, an anime/manga/dating sim geek, and Largo, a PC/video game/1337 I-I@x0r geek get stuck in Japan, and hilarity insures. Roughly 5 years later, Megatokyo is one of the most read and praised webcomics on the 'net, even after Rodney Caston left in late 2002. So popular, that the publishing rights where bought by Dark Horse books. This review is based on Dark Horses' reissue of volume one.

This book covers "chapter zero" of the Megatokyo comics. These are the earliest Megatokyo comics, and you can tell that neither Caston nor Gallegar are fully comfortable with their characters yet. The stories presented here are mostly humorous game and anime jokes, with a tiny bit of physical humor thrown in, but there are a few dramatic arcs, hinting at the future of Megatokyo.

The main characters are for the most part all introduced in this volume, but they aren't fully developed and seem more like caricatures of their later selves. The art is good, but it is lacking in comparison to many professional comic artists, or later volumes of Megatokyo.

This volume also contains all the "Shirt Guy Dom" comics (which are silly stick-figure comics done by Megatokyo's editor, Dom Nygun. Fortunately, the pages that these are on have dotted lines for tearing out these if you want) and art/one shot episode comics. The only thing missing is the "Fairytale of New York" Christmas Karaoke comic, which was probably not put in for copyright reasons.

This book obviously has the comics, but it is also packed with extras. The 4-panal comics have little comments by Fred Gallegar at the bottom of the page. There are also art samples of the characters, and a little information about the genesis of Megatokyo.

Megatokyo is one of those things that you either love or hate. I would suggest that you go to Megtokyo.com and read it from the beginning, and see if you like. Although the early-ness of the comics and the lack of the "Fairytale of New York" keep it from perfection, I still highly recommend this book