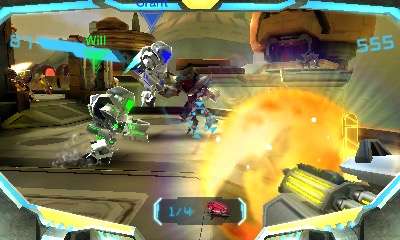 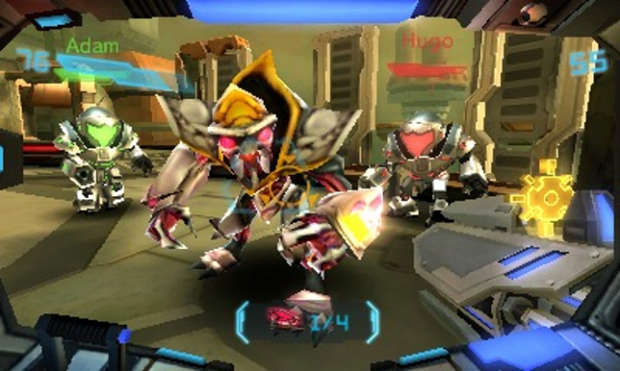 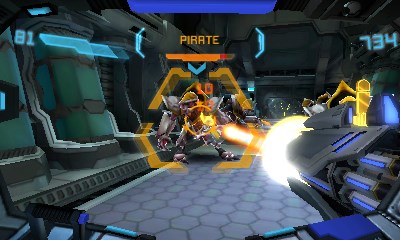 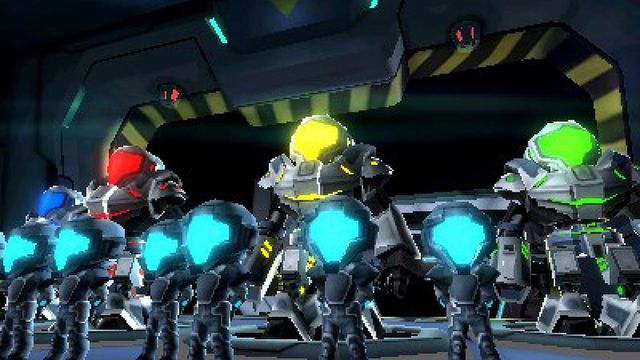 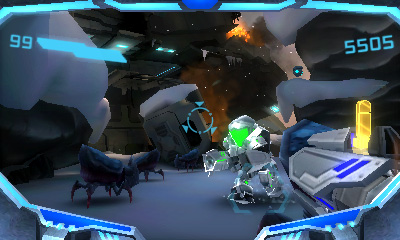 To say that the reveal two E3s ago of Metroid Prime: Federation Force was met with ire from fans would be underselling things quite a bit. While I won't delve into the more ridiculous side of the Metroid fan base who made a petition wanting the game cancelled or developers/producers fired over the game, the reaction from most Metroid lovers was hostile at best. Now, that the game is out and in Nintendo 3DS owners' hands, is Metroid Prime: Federation Force the mistake some have made it out to be, or does it have enough to merit its creation? ...Or maybe both?

First and foremost, have your mind lead all the thoughts of Metroid Prime: Federation Force playing like a typical Metroid game to your brain's nearest exit. Federation Force is nowhere near a Metroid-vania title, but at the same time, this doesn't make it a bad game. It's just a bad game to tie the Metroid name to, especially when fans of the franchise haven't seen a traditional Metroid game in years. Instead, Metroid Prime: Federation Force is a mission-based affair through typically linear levels. There is some exploration to be found, however, as most missions offer secrets for the adventuring type to discover in them, and these are rewarding to uncover. Regardless, played either by your lonesome offline, locally with up to four friends (all of whom require a Nintendo 3DS and a copy of the game), or online with up to four players, Federation Force packs a lot more action in its 22-mission affair than standard Metroid offerings.

A problem I had with a similar game that focused heavily on multiplayer was last fall's The Legend of Zelda: Tri Force Heroes which had a single player component that seemed like a last second, not-well-thought-out addition, giving players a tedious solo experience. However, Metroid Prime: Federation Force is built for not only multiplayer missions but solo affairs as well. This is in part to being able to equip a specific item that grants you double damage on foes and halved damage from enemy attacks, making for a more balanced experience when playing alone. The inclusion of bringing up to three drones with you on a mission helps as well. These can be destroyed by enemies, but generally this wasn't a problem for the most part in my experience. With a squadron of players either locally or online, the specific item I mentioned doesn't work, nor are the drones available, so as a team you need to take down foes together, which is a lot of fun.

Playing online with up to four players isn't perfect due to the lack of voice chat between players. It can be very hard to form strategies with randoms, as all you get for trying to communicate with others is a handful of voiced phrases that you can assign to the four directions on the Nintendo 3DS D-Pad. Furthermore, I've had incidents where the host would disconnect, making the ten minutes of the mission our squadron had done all for naught.

Perhaps I'm getting ahead of myself, though. After all, I've yet to even say what the actual gameplay of Federation Force is even like. Fortunately, it plays like a mobile Metroid Prime. You move along in your mech suit, either freely aiming at foes or locking onto them, tapping the jump button twice and a direction to either swiftly strafe or charge towards or away a foe. This is all the while being able to use a combination of attacks from your mech's main weapon, a blaster, which can also be powered up to unleashed a stronger charged shot, as well as extra ammunition like series standbys like missiles and super missiles, and new ammo like elemental shots of three varieties. While locked onto an enemy or aiming freely, you can hold the R button and tilt the Nintendo 3DS system to get more finely honed aiming, great for targeting weak points of certain enemies. If you have a New Nintendo 3DS, you can alternately use the right nub to aim.

Before each mission begins, you are able to customize your mech. Not only can you update the voice commands that you give to teammates online and change the paint job of your mech, but you can also equip various mods, found and collected in each mission. These are the secrets found in many missions that I was talking about earlier. At the start of your save data, your mech can only hold one mod. Eventually, you get up to three to carry at once. Mods have numerous different effects to them: some make specific attacks more powerful, some give you better defense, some allow you to carry more ammunition and items, and so forth.

After setting this up, you get a transmission from your commanding officer in the Federation, giving you details about your upcoming mission. Then, you are able to load up to weapons and items for your mech. Starting off, your mech can only hold a small amount of extra goodies such as missiles, elemental ammunition, healing tools, and other notable items. If you try to give your mech too much, it becomes overweight, and you have to decide what to unload off it. With completed missions, you earn more space to equip more items. This ensures that you aren't some ultra-powerful entity and makes it so you're required to use some strategy in what you bring into a mission.

A concern I had going in to Metroid Prime: Federation Force was that the missions would play out too similarly from one another. There wouldn't be enough variety was the main worry. Thankfully, these concerns were put to rest after only a handful of missions. While some do pretty much have you eliminating an enemy threat or reaching an area to take out a boss, others are much more varied in type. Some have you transporting some pods from point A to point B, all the while entering safe zones when the all-too-common electrical storm breaks loose. Others have you luring beasts called Ice Titans into cells, timing it so the gate slams shut while they are inside (and you aren't, of course). Then, there are missions that have you exiting your mech, moving about as your pilot, doing some fun and engaging platforming to avoid lasers, acid, and other hazards, and stealthily evade Space Pirate forces patrolling the area. My point with describing some of these missions is that you won't often be doing the same thing over and over again. This isn't some generic corridor shooter that will become tedious. Instead, you'll get tons of different styles of missions to complete either with others or by your lonesome.

Missions are scored by points you've accumulated by defeating enemies (bonuses given to defeating multiple foes at once or defeating them with an explosion like a missile or charged shot), as well as factoring in a time bonus for completing a mission within a target time. There is also one more consideration given, and that varies from mission to mission. Each mission has its own bonus goal that when met also awards points. For instance, one mission requires you and/or your squad to defeat a certain number of a particular type of enemy. Once these points are all added up, you earn up to three medals depending on how well you did point-wise. Medals are not just something to earn for completionists; they also unlock new paint jobs that can be used on your mech. In addition to the regular 22 missions (the selection isn't totally linear either-- you can occasionally choose from a trio of missions to play first, second, and then third), after beating the game, you unlock a hard mode, where damage is much greater against players, and new medals can be earned for new paint jobs.

The 22 missions played solo and with others isn't the only piece to Metroid Prime: Federation Force either. There's more to it in the form of Blast Ball, a competition mode where two teams of three face off that was originally debuted at the Nintendo World Championships at E3 2015. This game has you shooting at a hazardous-to-the-touch ball across a court, trying to launch it into your opponents' goal. Each time you score, your opponents' goal shrinks in size to make it harder for you to win. No worries-- this happens to your goal when the other team scores, too! As stated, the ball can damage your mech, resulting in it exploding and having you leave the field of play for several seconds, so watch out! Blast Ball may seem pretty tame compared to the much more frenzied pace and popularity of Rocket League, which has some similarities to Metroid Prime: Federation Force's extra mode, but overall, Blast Ball does have enough to it that it kept me coming back for more. And that's whether it was against the capable AI or online against friends and randoms.

Metroid Prime: Federation Force doesn't seem that graphically impressive for the Nintendo 3DS, especially for a game this late into the system's life. Still, the chibi-style mech and character design, while not really lending itself well to the Metroid series, do an adequate job of making it easy to distinguish between targets when things get a bit crowded. The environments, while not breathtaking, do offer some nice views and possess a fair amount of geometry to them. It's a simple look for the game, but one that serves it rather well. On the sound side, the music can be subdued at times, while at others rather bombastic. It's a healthy mix of tunes that delivers what one would expect from a Metroid game.

While not the Metroid game many of us were wanting from Nintendo, especially since the last real Metroid game was in 2010 with the Wii's Other M (and many didn't care for that one, though I didn't mind it), Metroid Prime: Federation Force manages to pull off an exciting blend of action-packed Space Pirate-blasting, fun and varied mission design, and Metroid Prime-style controls for a handheld gaming device. Whether alone, with friends, or with randoms, the experience is an engaging one, and shooting for medals and playing Blast Ball should offer a lot of longevity. The online experience depends on how active the community is and remains. Otherwise, you'll need to scour some forums or friends for online action. This may not be Metroid Prime 4 or Metroid Dread, but Metroid Prime: Federation Force is a fun excursion and taste of the franchise... for now, Nintendo. *gives stern look*
Review Page Hits: 0 today (347 total)
mediahook