Metroid makes a succsesful jump from side scrolling to first person 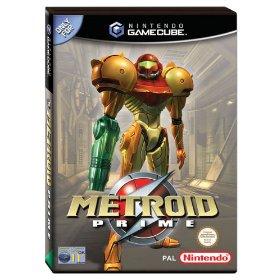 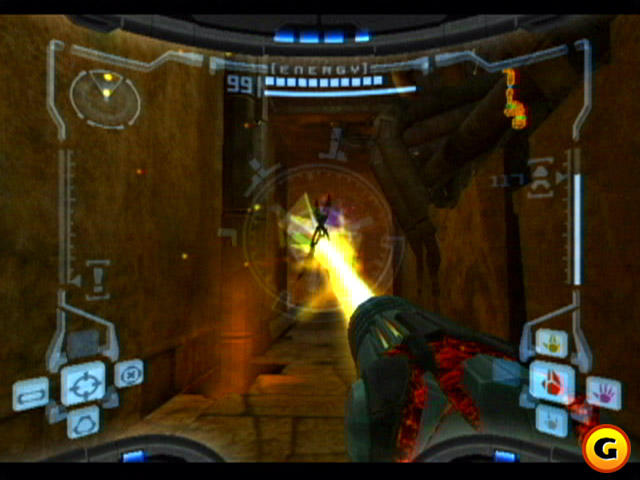 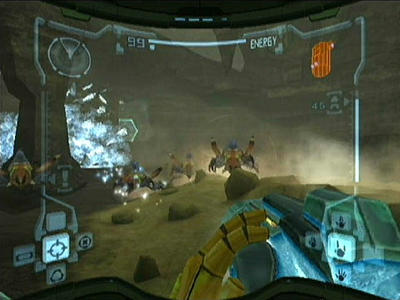 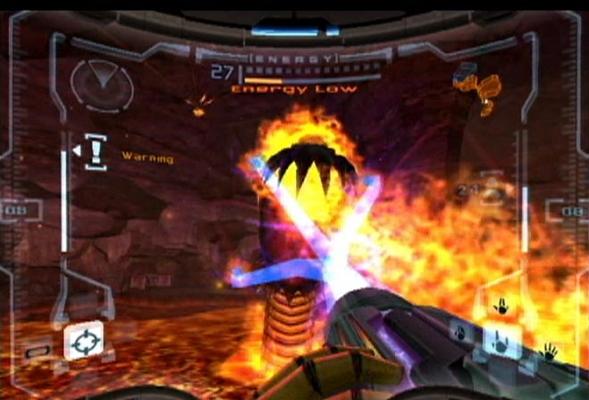 Back in 2002 I was a loyal PS2 user who didn't have much use for any other system. Then Metroid Prime was release and my interest peaked. Was it worth the (at the time) $150 bucks for a GameCube to play one game? The short answer is yes, as Metroid Prime will go down as one of my favorite all time games.

There was a lot of concern with Metroid going from side scrolling to first-person from the old-school Metroid fans, but Nintendo and Retro Studios pulled it off and then some. While other FPS titles are content to just give you an open view with a HUD, Metroid Prime gives you a view from inside the helmet of Samus with the HUD built into said helmet. This gives the game a more immersive view as you actually feel like you are playing from Samus' view. The controls perfect for walking around the world and the platforming elements, but it fell short in that there is no free-look while moving. You have to both stop and press a trigger for free look or you had to lock onto an enemy to move your view. At first it felt like a big problem, but once you get used to it and when you get to travel around such lush environments, the free-look issue fades away. The other main element of the game is puzzle solving. The majorities of the puzzles are solved while Samus is in Spider Ball form (she crouches into a perfectly round ball) and are very clever. The puzzles all strike a nice balance between creativity and difficulty, with none being so difficult that they are frustrating.

The best part of the game was the world that Retro created. While the GC didn't have the processing power of the Xbox or PS2, it was just enough to make this a wonderful looking title. The art found within the world and enemies is truly creative and truly felt like a Metroid based universe. Retro went the extra step in giving each enemy a backgounrd which you could scan. Also scannable was info about the life that once lived in the ruins that you travel through. This added a great bit to the story telling of the game.

Speaking of storyline, it's one of the strong elements of the game. The game starts off with Samus stripped of major abilities as she arrives on the first planet after an accident. You are given her standard blaster and that's about it. Throughout the game, gaining additional abilities are built right into the story line. You will get different elemental blasters which add a strategic element to the game. For instance you might be on a level made of snow and ice and you have to use your fire blaster to advance. You also get missiles, life expansions and grappling attachments. Along with having to gain certain abilities back, the main story revolves around understanding the mystery of how Tallon IV became an ancient ruin. Advancing in the story will find that Space Pirates chased the Chozo away from Tallon IV... But the Chozo had prophesied that Samus would come to be their savior. It's your job to make that happen.

While there are a few complaints here and there (free-look and I don't think the title is infinitely repayable) this is the best Metroid game ever. Metroid Prime 2 was not as much fun and the multiplayer felt forced. Metroid Prime 3 got rid of the Free-Look issue but was still just a step behind of the original because it felt, well... less original. This is one of the best updates to any old-school gaming franchise and if you haven't played it, you need to.
Review Page Hits: 0 today (326 total)
mediahook