"Mike is waiting for your challenge!!" 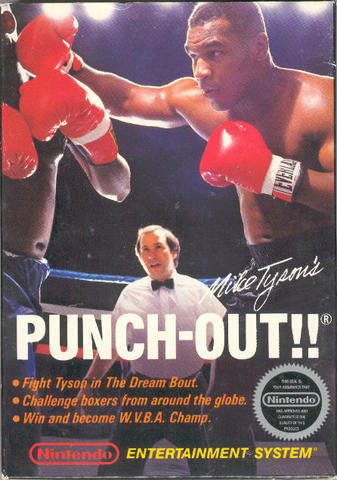 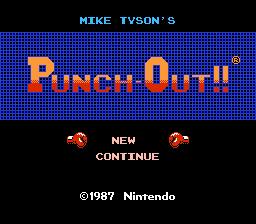 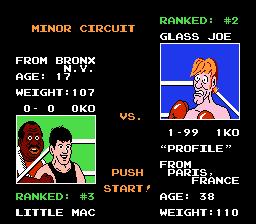 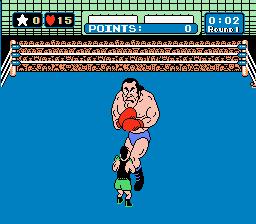 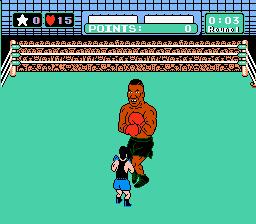 Let me just start off by saying that Mike Tyson's Punch-Out is my all time favorite NES game. There really aren't a whole lot of amazingly fun games released for the Nintendo that you can just pop into your console and be entertained for more than 5 or 10 minutes, but "Iron Mike" and his 8-bit boxing buddies are more than willing to take you on at any time.
This game is essentially the same exact game as the original Punch-Out, but tragically, someone sexually assaulted Mr. Dream and his right ear was mysteriously chewed off. Tyson threatened to eat somebody's baby, so they slapped his name on the cover and voila! ... a brand new boxing game from our friends at Nintendo.

Gameplay
You play as an up and coming rookie boxer, Little Mac, and damn is he little. Mac looks like he is only about 4 feet tall, and most of the bouts resemble a David vs. Goliath match, but you will soon find out that our hero Little Mac ain't scared. With the help of his trusty trainer, Doc Louis, Mac faces off with a variety of opponents, working his way up the WVBA (World Video Boxing Association) food chain to the ultimate goal of fighting the world champ himself - good ol' Mike Tyson.

Mac will battle the likes of Glass Joe, Von Kaiser, Piston Honda, Don Flamenco, Great Tiger, King Hippo, Bald Bull, Mr. Sandman, Soda Popinski, and Super Macho Man. Each fighter brings something new to the table, and you must find and exploit each fighter's weaknesses in order to be successful.

Learning the ropes is relatively easy, and you can pretty much get a good feel of how to approach each boxer by the second or third fight. Basically, you have your head punches, body punches and a special uppercuts. You will have to either dodge or duck your opponents punches in order to counter punch and damage him. Easy enough. Just make sure you have a good working controller, and a responsive d-pad.

3 Rounds. 3 Minutes each. KO, TKO, or Decision by Mario (the referee) at the end of the 3rd Round will determine the victor.

Graphics
MTPO is one of the better looking games for the NES. The quality and detail put into each character is top notch and even the interfaces look great. The animations are smooth and there is no lag or slowdown during the matches. I can't say much for the detail in the crowd or ring, but even the boxing games released for this day and age still look pretty ridiculous.

Sound
The sound isn't too bad, but it also isn't Oscar worthy either. I can't really think of anything in particular that I dislike or that's annoying, so that's a plus. The track that plays while Mac is training in-between circuits is pretty catchy and sometimes I catch myself humming it in class, but I'm also pretty weird. It would have been nice to hear Mike's voice taunting Mac between rounds so that we could look back and make fun of him now, but fortunately he's all ready given us more than enough to work with.

Replay Value
This is where MTPO really shines. Even when you have mastered every technique and learned every fighter's rhythm, it's still exciting to go back and put your skills into action. I consider myself to be a master at this game, but I still have some trouble with a few of the higher ranked boxers, especially Tyson. If you don't time his punches perfectly, just one of his uppercuts will take Mac down. This game is challenging and always a lot of fun to play.
MTPO is an NES classic and definitely a cart that you should consider having in your collection.


Passwords
At the title screen press Down on your controller to access the continue option and enter these pass keys:

Collector's Notes
Mike Tyson's Punch-Out originally came with a letter from Tyson. Essentially, it was a bunch of his nonsense wisdom, but this letter is a little difficult to find these days. A nice collector's item.
Letter From Tyson

This game will generally run you about $15 online or in game stores.
Review Page Hits: 0 today (450 total)
mediahook