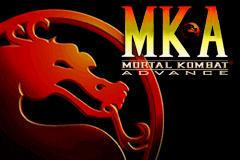 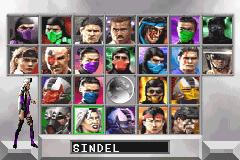 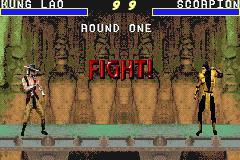 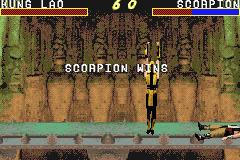 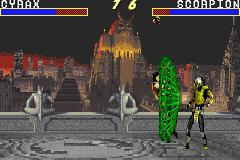 This is basically just a port of Ultimate Mortal Kombat 3 from the Super Nintendo, but with extra flaws.

First up, trying to beat the 1 Player mode is tough, because the computer is a cheap bastard. Oftentimes it will pull off three moves in the time it takes you to do just one. The only way I could beat the game was by playing just as dirty -- by using Stryker's gun attack over and over again. It is pretty hard to pull off moves, and the manual isn't much help since it lists moves wrong and even lists moves that aren't in the game.

Graphically, the game looks good in still screenshots, but in motion, it is pretty bad. The animation is choppy and the Fatalities are all messed up now. Only a handful of backgrounds made it into the game and none are animated, and you only get one stage to fight on when you play the 2 player modes. But to play the 2 player mode, you will have to hope one of your friends is dumb enough to buy his own cart. For some reason, the game lags when playing 2 player link-up.

The announcer's voice is kinda muffled and almost all of the fighters sound the same. The background music is alright though, probably the only thing in this game that is above average.
Review Page Hits: 1 today (793 total)
mediahook