Now you can play ninja in the palm of your hand. This port of the popular Flash game has some rough edges but has a lot to offer if you can get into it. 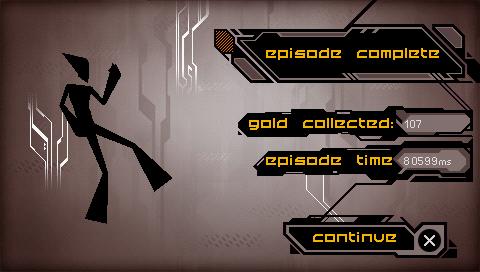 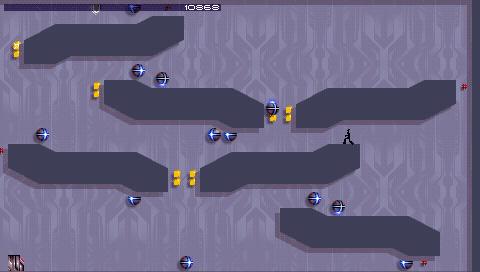 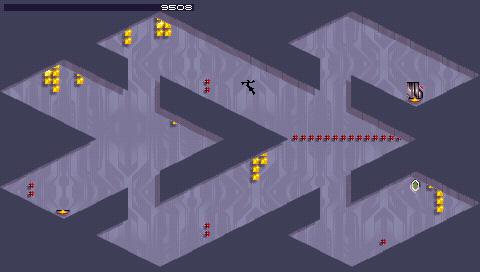 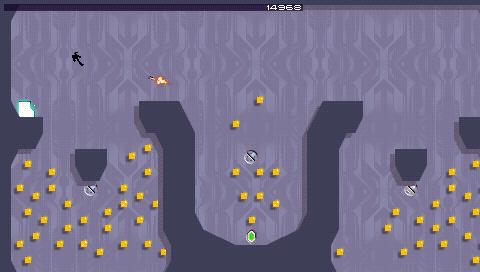 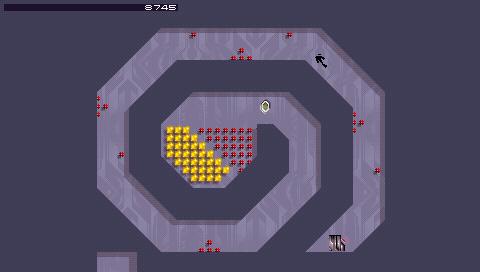 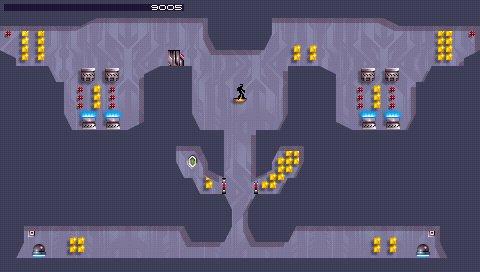 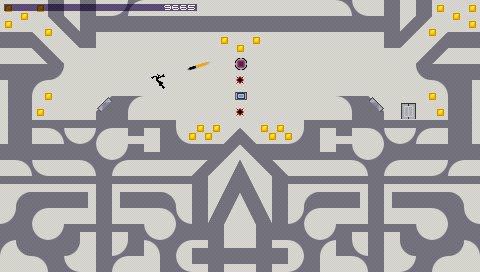 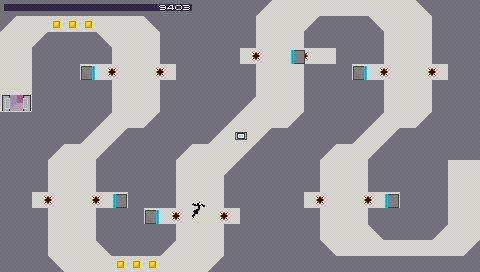 N+ is an improved version of a popular flash game called "N". It's a simple yet challenging action/puzzle 2D platformer game in which you control a stylish little ninja that runs and jumps around the screen trying to pick up gold pieces, open the exit then leave all without falling or getting killed by an enemy.

The levels are timed, but you get more time has you collect gold. This also becomes the way you are scored. The more time you have left when you finish the level, the better your score.

The Ninja that you control can run, jump, stick to walls, and bounce off walls. N+ features a physics engine as well as stylish sprite-based graphics. There are various objects that can appear on each level. Bounce pads cause your ninja to fly up into the air. Bounceblocks absorb your ninja's momentum. Then, there are doors, opened or closed depending on switches and such. Finally, there are an array of enemies (mines, chasers, turrets, drones, etc.) that you will need to avoid or use to your advantage.

One of the great things about this game is that it was originally developed by a couple guys as an independent and free game. It became popular and has since become a commercial success too. It's great seeing an independent game get some glory.

Check out the links section of this review to find the version you can play on your PC. The original game was done for Flash so it will run in most web browsers. The Flash game has a community that was built up around it. The writers of the game have made it possible for players to create levels and share them with others. While these levels are often fairly random, it also gives the game a whole new dimension and allows for many possibilities.

The graphics for N+ have been a bit compressed to fit on a PSP screen. So, some of the stylishness is a little hard to see since things are about half scale. The game play is about the same as it is with the Flash version. The directional buttons are used to control the ninja movement. The analog stick is not used (a disappointment for me). The X button jumps. The triangle button kills your ninja (at least as far as I can tell, I'm not sure why they added this). It is kind of cool when your ninja explodes, though.

A level editor is included with the game, so you can make your own levels. There are also levels you can download over the network. You can share the levels you create with the N+ community. There is also a level rating system that you can use.

Levels range from quick and easy to frustrating and hard. As you play you soon learn that you need to develop a knack for knowing when your ninja is moving too fast. If he falls too fast or even if he jumps off walls upward too fast, he'll explode when he hits the top or bottom. Luckily, it's easy enough to get you ninja to do a little wall slide to slow things down before he gets hurt. The more you play, the more you develop a rhythm (hopefully).

N+ started as a Flash game, then was brought to Xbox Live Arcade where it got good reviews and some popularity. Now, it's coming out on the two main portable systems: PSP and Nintendo DS. You'll be able to play N+ anywhere you go now.

There are 200 levels included with the game. So, there's plenty of content to work your way through. The diversity of the levels is quite amazing. There is also a networked multiplayer mode that you play with 2 people. There are 100 levels of co-operative play and 50 that are versus style.

As you play and finish levels, content gets unlocked. For example, your ninja starts out black, but you can earn different colors. My ninja is currently red. Also, levels will have more varied challenges unlocked like flame-throwing booby-traps, force-fields, and an enemy ninja who will try to thwart you.

The menus for the game felt a little awkward at times. In order to quit out of a level I had to start it up. Also, the whole game feels fairly stripped down. It all works well enough and the gameplay is good. But, it feels like it could've used a little polish. I would have liked more options (like a way to use the analog stick to control the ninja's movement), plus some help screens and perhaps more story elements to get me in the mood.
Review Page Hits: 1 today (976 total)
mediahook