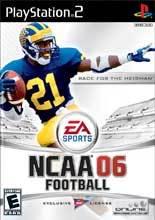 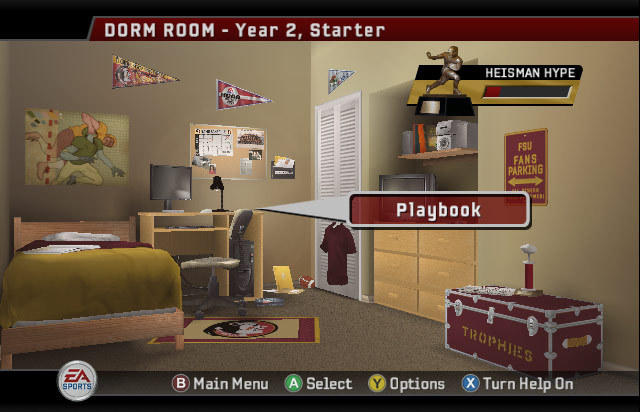 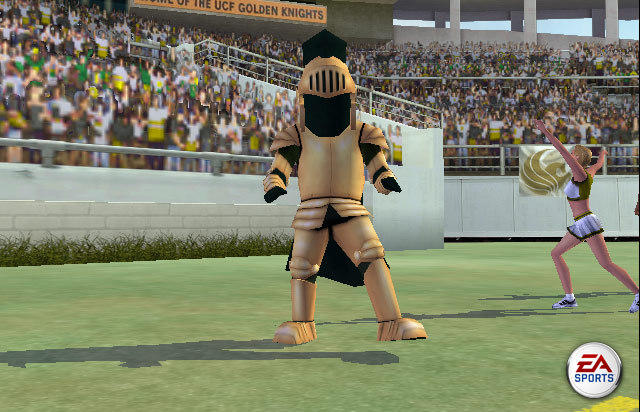 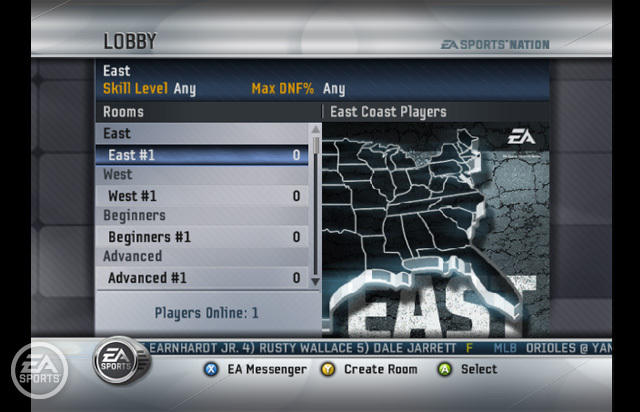 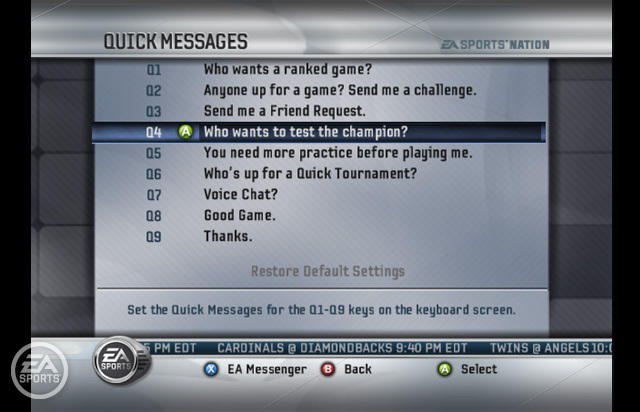 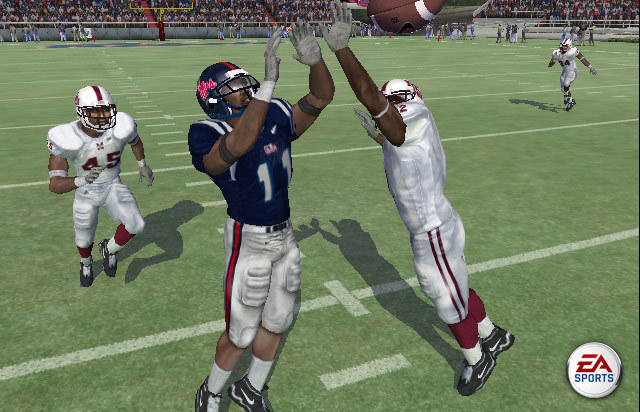 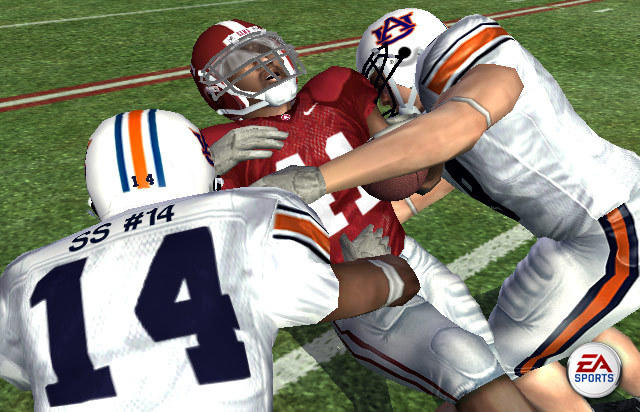 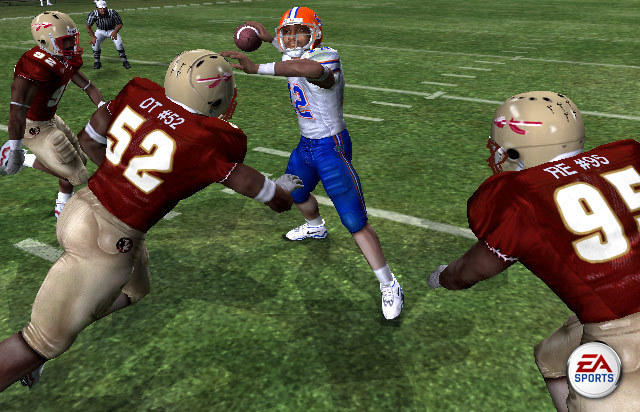 Every year, EA releases another annual version of one of its famous sports games, and every year, it finds gaming addicts who will eagerly fork out fifty bones for a game that may not be much more than a roster update. So is the new NCAA Football 2006 worth your hard-earned money or a high dollar trade on GTZ? The answer is maybe.

One of the biggest enhancements in this year's NCAA is gameplay. Last year had to be one of the most frustrating NCAA versions in recent years because the passing game was horrible. Even with open receivers, proper play-calling, AND some of the nation's best athletes, catching a football was usually a 50/50 proposition! Gamers were forced to control their targets at all times because the computer AI turned most receivers with hands of glue into butterfingers. To add insult to injury, the defensive back AI was also equally atrocious, which allowed many online gamers to get away with a "bombs away offense" even if they were playing a top college football defense. Most of that has been fixed and the gameplay is much smoother and closer to its football peer, Madden. Madden players will even notice the introduction of familiar gameplay elements such as the "hit stick."

Another new feature in this year's NCAA is the "Race for the Heisman." This mode allows you to control a player as you attempt to win the ultimate prize in college football -- the Heisman Trophy. To determine your custom player's initial attributes, you will participate in a simple drill with ten plays. That's it! Nothing else will determine the attributes of your player in the beginning of his college career. After the drill, you will be offered only three scholarships and the prestige of the schools will depend on how well you performed in the drill. There is also a fourth default option if you would rather be a walk-on for a school of your choice. After choosing a school, your player is automatically set as the starter even if there is a player with much better attributes at the same position. Throughout the year, you will be able to read a few simple letters from fans, watch your Heisman meter, and play the game just as you would in dynasty mode. In other words, this mode is basically worthless. EA once again tried to add a simple feature, advertise it like it was something special, and we the consumer are once again frustrated at the EA Sports habit of putting forth mediocre effort.

Just so you don't think I'm completely down on EA, I do enjoy one of the new features in NCAA Football 2006 - specifically, the new recruiting features. Recruiting high school players and building your small school into a college football powerhouse in dynasty mode is probably the most entertaining way to play NCAA Football and EA has boosted the fun by allowing in-season recruiting. You can pull in a few prospects during the year by appropriating a percentage of points to players of your choice, with the most important factor being the week you invite the prospect to your school. If the prospect visits during a big win, you may lock them up instantly. The offseason recruiting features have also been slightly expanded and made easier to use.

The impact player feature is another new addition in NCAA Football 2006. Unfortunately, this feature is useless because while it does help for quick strategy by pointing out which players on offense and defense are the playmakers for each team, it provides an "in the zone" moment for players which seems to be completely random. When your player is "in the zone," he will get a boost to his skills and play the best football of his life, but it never seems to turn on after a few big plays, it always appears to be randomly selected by the computer AI. The impact player feature is a nice touch-up, but nothing that drastically improves the game over last year's version.

As always, online play is one of the best ways to play any EA Sports title, and EA continues to add more enhanced online features. But NCAA is still not up to the level of Madden which will add everything from fantasy football leagues to upload/download links for custom files in this year's version. Reputation plays a much bigger factor in user ratings, with cheesers (players who don't play realistic football or exploit the AI) being penalized by thumbs-down ratings more than ever. You'll still find a plentiful collection of cheesers, griefers, and quitters online who make the game less fun, and while EA has fixed some of the player ratings, anyone on the PS2 version can always create a new handle if their feedback ratings get too suspicious. If that bothers you, my advice is to check out the Xbox version which may only allow one username, your paid Xbox Live username.

This year's NCAA soundtrack is a distraction rather than an enhancement. College football fight songs add a nice touch to the game, but they aren't as appealing as some of the big name pop stars who are signed by Madden. So this year, NCAA tried to go in the direction of Madden and insert a soundtrack of contemporary artists, but most of the songs are TERRIBLE! This isn't like last year's Madden that had artists such as Green Day and Outkast. The game allows you to change the soundtrack back to college fight songs and I quickly enabled that option after only an hour of gameplay.

The graphics in NCAA Football 2006 are admirable for a sports game. As usual, don't believe your game is going to look as nice as the standard screenshots that EA Sports passes out which always show close-ups of gameplay that you will never see while playing. As a matter of fact, one of the best viewing angles in the game is a classic overhead angle which most veterans use because it shows more players on the field. So graphics are really a non-factor for most hardcore football gamers.

If you're debating which version to get, I would recommend the Xbox version for the aforementioned reasons involving online play, but like most EA games, the graphics are basically the same on both consoles. If you don't play online, I would recommend the PS2 version, because the PS2 controllers are better designed for sports games. The placement of the black and white buttons on the Xbox controller continues to be an obstacle and doesn't allow for gameplay as smooth as the PS2 controllers. If you pick up the PS2 version, make sure you have plenty of memory card space available, because this game will use a lot of it for dynasty mode and draft files that can be exported to Madden for realistic drafts. Also check the links in this review for websites that allow you to download the real player names into your game because as usual, the jersey numbers are the only identification used although players ratings and bios are true depictions of real players.

If you're not into sports games, my advice is to skip NCAA Football 2006 and never look back, because if you haven't found any fun in this genre with better products, then this one isn't going to change your mind. If you're only looking for draft files for Madden NFL 2006, I would find a friend who has them or trade with someone on GTZ instead. I would only recommend NCAA Football 2006 for hardcore football gamers (you know who you are) who can't get enough and for college football enthusiasts. There is still a large market for people who would rather play with college offenses and defenses and recruit players instead of signing them in free agency. If you're in that niche market, then grab this game quickly because it's an improvement over last year's version, but everyone else should either pass it up, or wait for the price to drop.
Review Page Hits: 1 today (216 total)
mediahook