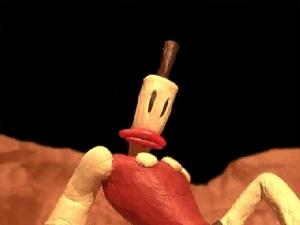 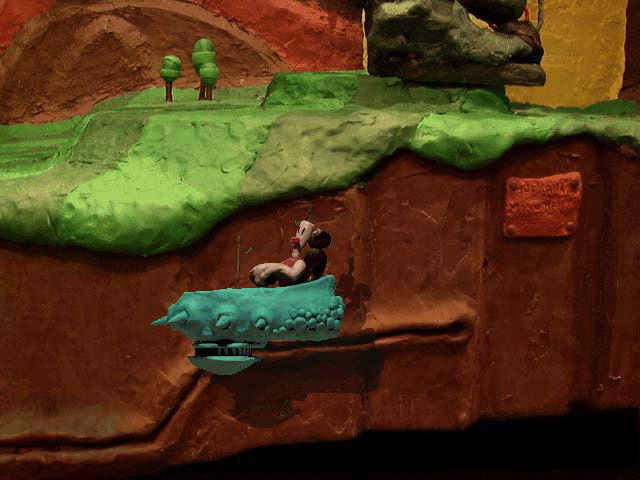 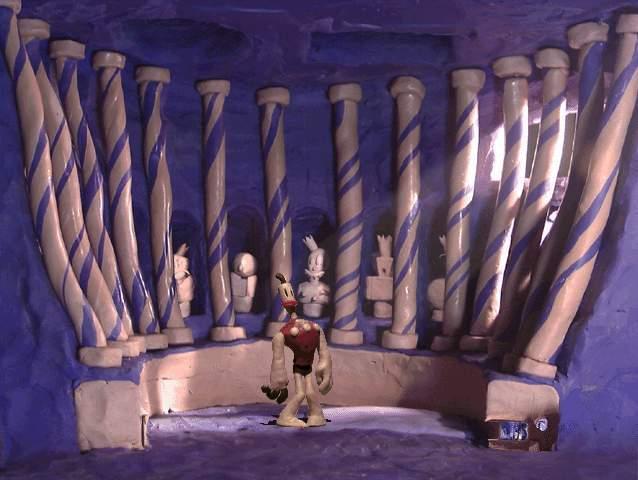 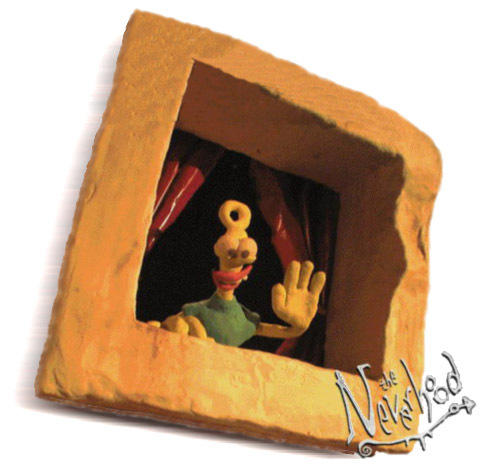 I seriously enjoy funny, off-the-wall, and generally off-center games. When l got the chance to play Dreamworks Interactive's The Neverhood I jumped at the opportunity. Created by Doug TenNapel of Earthworm Jim fame, The Neverhood combines your traditional point-and-click adventure game with a large dose of bizarre humor, difficult puzzles, and a very in-depth story of good and evil. When the game begins, the player is abruptly thrust into the strangely surreal and occasionally frightening land of The Neverhood. You are provided with no introduction, no back-story, and very little to give the player any inclination about who you are and what you are to do. After solving a couple simple puzzles, things slowly start to come together but it isn't until you get around a third of the game in that the story begins to make real sense. This is due to the fact that the only way of progressing the story is by finding tapes scattered throughout the land. Once acquired, the tapes (that can only be played in certain locations) introduce the character of Willie Trombone who serves both as your guide to the future and to the past of The Neverhood. Being a spoiler-free review, I cannot go into much depth, but it is safe to say that things go downhill quickly for the protagonist Klaymen and it is up to you to make his world right again.

Being a puzzle-oriented adventure title, one would assume that as you get further into the game the puzzles get progressively more difficult and clues become more scarce. The first several puzzles can be solved with very little taxation of the brain but as the going gets tough, the puzzles get tougher. In contrast with other reviews that you may read (particularly this one} I didn't think that the puzzles became overly problematic, although there were a couple of instances in which I contemplated resorting to a FAQ. One word of advice though: Write down everything that you see.

Graphically, The Neverhood stuns. Utilizing over three tons of clay, The Neverhood team crafted a living, breathing world without the use of 3D polygons and all the other current-generation mumbo jumbo that games flaunt about. Everything was filmed in the classic stop/start animation, conjuring memories of Gumby and that show with the boy and his dog. Every single piece of the background (including the characters) looks as though you could remove them from your computer monitor to more closely examine their beauty. The game, however, does show its age (it was released in 1996) with fairly low resolutions and especially grainy cut-scenes.

"Everybody way oh..." With most games at the time featuring heavy metal and electronica based soundtracks, The Neverhood team, armed with musician-extraordinaire Terry S. Taylor created a musical soundscape dominated by bluegrass, experimental jazz, and unintelligible vocal arrangements to further distance themselves from the norm. Featuring over 25 seperate ditties, the player rarely hears the same tune twice let alone be prone to growing weary of hearing any certain song. Overall, the soundtrack serves as a perfect backdrop to the distinct locales of The Neverhood. Moving Klaymen about and clicking on the various devices is simply a breeze. Existing on a fully two-dimensional plane, rarely does an instance arise in which the location to click is in doubt. Actually, watching Klaymen lumpily walk about is enough of a joy to justify the occasional botched click.

The story (which from the outset is virtually nonexistent) morphs into an excellent tale of the forces of good versus the ever-present forces of evil. Although it has been done time and time again, The Neverhood manages to breathe a bit of fresh air into the formula with the hilarious tapes by Willie and his telling of the whole story of the creation of The Neverhood. As far as shortcomings go, The Neverhood has its fair share. For one thing, the experience is extremely short. Essentially, it took me around four or five hours to accomplish everything that there is to do in the game. Also, once defeated, there is really no incentive to really give it another go due to the linear nature of the game. Finally, the game does carry a rather large price tag, generally going for around $50+ on eBay and other websites.

In the end, putting it simply, The Neverhood is a short but exciting romp through a series of puzzles all connected together by some cutscenes. Yet, just reading this review does not do it justice. Just making visual contact with gorgeous world that is The Neverhood is a sight to behold. Everything just feels so warm and lush; factors that I feel are completely void in the current batch of games on the market. Check it out, you will thank me in due time.

Also, be sure to keep an eye out for my review of The Neverhood's PSX successor Skullmonkeys, which will be soon to come...
Review Page Hits: 0 today (1,027 total)
mediahook