Do the Mario with this return of the 2D Mario series! 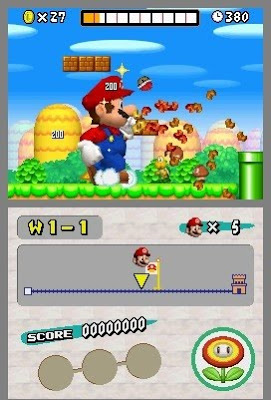 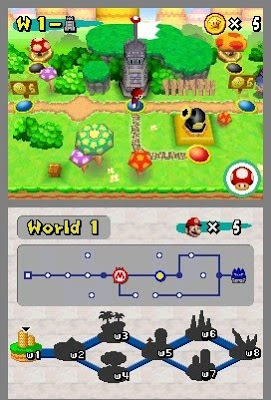 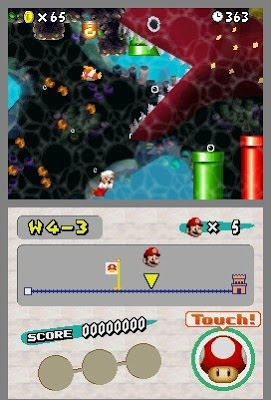 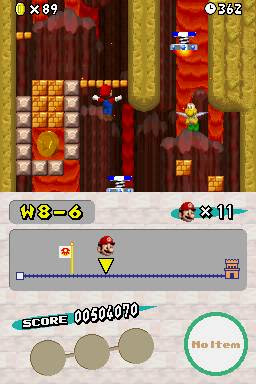 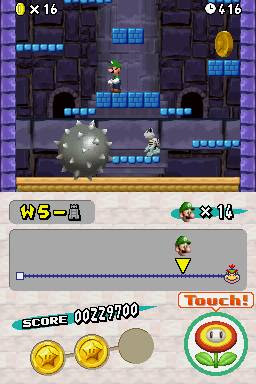 It had been more than a decade since we'd had a traditional 2-D Mario platformer. The last of which was Super Mario World-- not counting Yoshi's Island as that was a different series altogether. In 2006, gamers' dreams came true as New Super Mario Bros. for the Nintendo DS brought with it 3-D sprites and backgrounds with 2-D gameplay. And not a moment too soon! The release of New Super Mario Bros. Wii is upon, the first console 2-D Mario in over fifteen years, so it seems to be a perfect time to look back on the DS original and see how it holds up before its big brother releases. Was it worth the excruciating wait?

Our simple story starts off with Mario and Princess Peach frolicking just outside of Peach's castle. Suddenly, a bombardment of Bowser's henchmen start invading the castle. Mario, quick to save the day, runs towards the castle. However, he unintentionally leaves Peach behind who is then scooped up and kidnapped by Bowser Jr. Mario catches on to Bowser Jr.'s plan, and he chases after Bowser's scheming son from castle to castle and from fortress to fortress in attempt to take back Peach from Bowser's sinister clutches. As stated, it's a simple story, but Mario games were never about intricate plots. They're more about running and jumping and bouncing off Goombas. New Super Mario Bros. succeeds in this to a "T".

There are eight worlds in New Super Mario Bros., and each one has an overworld map for Mario to explore. Right away, one of the problems with the world structure is that to access worlds four and seven, you need to beat the previous world's boss with a specific power-up. While this is annoying in of itself, you are basically forced to skip two of the worlds. Yes, you can go back to any previous world you've visited to unlock the two hidden worlds, but it'd be much more preferable to take on the worlds one-by-one. As for the overworlds, each map has multiple paths to take, secret areas and levels to access, item and 1-up mushroom houses (akin to Super Mario Bros. 3), and warp cannons that can shoot players to new worlds. There's a myriad of level types from grasslands to deserts to icy slopes to castles to haunted houses to fortresses and much more.

The levels themselves are filled to the brim with challenges and hazards. A wide cast of classic Mushroom Kingdom denizens are featured like goombas, koopa troopas, bob-ombs, piranha plants, bloopers, cheep-cheeps, dry bones, whomps, thwomps, and wigglers plus creatures from Mario's 3-D exploits like those enemies that skim across the water in Super Mario 64 as well as Dorrie from the same game's Hazy Maze Cave. In addition to old favorites, some new ones march onto New Super Mario Bros. such as a ghost that pummels through blocks and unaware plumbers with its giant boxing gloves. Meanwhile, there's a bunch of non-living obstacles to contend with such as giant spike-filled pillars that can crush Mario within a moment's notice, poisonous water that will kill anything it touches, logs that roll into bottomless pits, fire bars from the very first Super Mario Bros. that rotate in foreboding fashion, and platforms that will shortly fall if Mario stays on them long enough-- and that's just for starters! Each world ends with a boss battle that follows the general three hit-death rule where Mario will face off against foes like Petey Piranha, a gigantic goomba, and a monty mole piloting a bullet bill-blasting tank.

Thankfully, Mario has a new bag of tricks this time around. Taking some tricks from his 3-D adventures, Mario can now jump off walls as well as ground pound enemies and blocks that get in the way of his progress. Both moves work well and they feel great to use, too. There's also a new host of items in Mario's repertoire aside from the traditional fire flowers, starmen, and mushrooms. First off, there's the koopa shell item that Mario can use to hide into a blue shell as he runs and plow into enemies and blocks. It's the perfect way to get through tight platforms covered in blocks. There are also two new types of mushrooms of the mega and mini variety. While not common, the mega mushroom turns Mario into gigantic form, allowing him to destroy anything in his way from baddies to blocks to pipes. Meanwhile, the mini mushroom takes Mario and shrinks him down to almost microscopic size. He can enter warp pipes otherwise too small for regular Mario, run across water, and leap into air higher than ever before. You can even store one item as a back-up, Super Mario World-style, and touch the screen to unleash its aid.

Apart from getting to the finish of a level, there's three star coins hidden in precarious locations in each level. These unlock new paths on the overworld for Mario to take, usually leading to extra levels or item and 1-up-giving mushroom houses. Tracking down each of the three star coins is no easy task in later levels. They can be placed in dangerous areas of a given level, hidden in warp pipes, placed in an area that only a miniature Mario or koopa shell Mario can reach, or just fiendishly hidden in general. Some levels even have secret exits. Unlike Super Mario World, there's no way of knowing whether or not a level possesses a secret exit or not which is vexing for one, and it two, it can be very annoying searching for a secret exit in a level that doesn't even have one!

One more problem that plagues New Super Mario Bros. is the lack of a decent saving structure. For a portable game that's supposed to be pick-up-and-play, there is no quick-save feature. Instead you have to play through sometimes three or more levels at a time before you can finally get to a castle, beat it, and then unlock the option to save at that, and only that point in time-- at least until you beat another castle, fortress, or ghost house. Thankfully, when you spend star coins to get through signposts, you are given the option to save there, but these are too few and far in-between for someone who may decide just to play one or two levels and then quit.

On the other side of things are a slew of familiar mini-games to anyone who has played the DS launch title, Super Mario 64 DS. These games are all played with the stylus, and they can be played with up to four players. Additionally, there's a two-player competitive mode for two players to face off to see who can collect the most stars within a set time limit. These modes are enjoyable, but they won't last too many players too terribly long. Nonetheless, they are a fun distraction for the time you play through these modes.

Presentation-wise, the 3-D visuals are pleasurable to look at. The animations of enemies and characters alike are quite good. The game is colorful and runs smoothly for the most part. What isn't as good is the soundtrack. While not horrible, many tunes just aren't very good or memorable-- though some tracks like the castle theme and overworld themes are nice to listen to.

New Super Mario Bros. may not innovate like past Mario titles have, but it's certainly holds up well to them. With a bounty of somewhat challenging levels to complete, three star coins to collect in each level, extra levels, secret exits, bonus mini-games, familiar gameplay, and charming visuals, New Super Mario Bros. takes the cake as one of the best 2-D platformers the DS has to offer and an incredibly enjoyable 2-D Mario on its own merit.
Review Page Hits: 0 today (209 total)
mediahook