U, Mario, and A Date With Fun 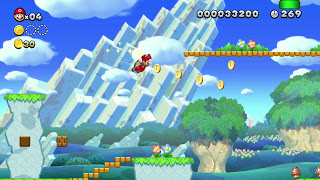 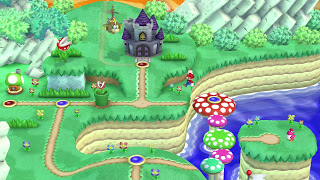 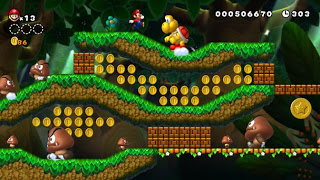 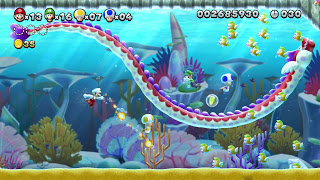 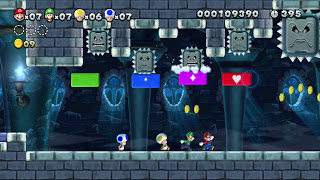 Do you remember a time when there was a decade stretch where there wasn't a new 2D Mario platformer to be found? This reviewer does. Now they seem to be coming out of the woodwork. Well, actually that isn't that fair to say. Since New Super Mario Bros. on the Nintendo DS, there comes only one new 2D Mario platformer for every Nintendo system. Speaking of which, the New Super Mario Bros. series might come off as one that doesn't try hard enough to push the platforming genre forward. Some might even say that Nintendo has rested on its laurels.

With a new home console and a new Mario game to go along with it, something that hasn't happened since the Nintendo 64 in 1996, Wii U owners have a mighty helping of new 2D Mario to enjoy in the form of New Super Mario Bros. U. Does the Wii U GamePad and added features offer a valid reason for Nintendo to still be putting "New' in front of "Super Mario Bros."?

If you have played one of the myriad Mario titles out there, you know how Nintendo has set this up plot-wise... or do you? This time around, Bowser and his many minions have invaded Princess Peach Toadstool's castle, have held the princess as a prisoner in her own home, and have physically ejected Mario and friends from the vicinity. It is up to you, the player, to find your way back home, platforming through many levels of running and jumping fun. The story is a nice change of pace. It's still an excuse for players to do all the aforementioned running and jumping, but it's different from the usual plot of a 2D Mario game regardless.

Mario's adventure begins in the Acorn Plains and ends at Peach's Castle. There are nine worlds in all, one of which being the standard bonus world. Although the worlds--and even the levels-- are named this go around, you're still playing through the same world tropes as usual of the New Super Mario Bros. series: grassland, desert, water, ice, forest/jungle, mountain, sky, and fire.

However, you won't be traversing the worlds in the same style as past NSMB games. This time, the entire world map is interconnected. There is a feeling of cohesiveness not seen since Super Mario World back in 1991. The world map features lots of visual touches, branching paths, and secret exits, allowing you to skip entire worlds, that make for an appealing map that you just can't stop wanting to explore. The only problem when it concerns secret exits is that unlike Super Mario World, levels containing secret exits are not marked, making for searching through every nook and cranny of each level, looking for an exit that may or may not even be there.

Each world contains the tradition Mario fare. You have your standard courses, your towers (generally concluding with a battle against Boom-Boom), your haunted houses, your Toad Houses in which you can earn items or 1UPs, and your final level in each world, a Koopaling castle. Levels each have their own element that is used repeatedly throughout-- from a tower containing rotating stone cogs that can crush you like a tin can, to a level filled with spinning star platforms, to a swimming level where you are constantly being pursued by a dragon-like eel. One particular "airship" level that appears in the second half of the game is one of my favorite levels in New Super Mario Bros. U.

Although there are some new ideas presented, a good portion of level elements are things we've seen before in past New Super Mario Bros. games, specifically the excellent (and SPC Game of the Year 2009) Wii iteration. While the levels in the Wii U game are by no means rehashes of past games, there is a lot of retreaded ground, including a level that takes place aboard a raft that stops if too many things are resting on top of it at one time, a level where there are bubbles of water floating in the air, one where meteors fall from the sky, and a dark underwater level where enemies light the way for you-- all ideas taken from New Super Mario Bros. Wii.

Exclusive to New Super Mario Bros. U, however, are the Squirrel Suit and three different colored Baby Yoshis. The Squirrel Suit allows Mario or whomever to glide across gaps and perform a flying squirrel jump by floating up into the sky. It's an awesome addition to the lineup of Mario power-ups. In addition to that, there are a trio of Baby Yoshis alongside Adult Yoshi that have different uses. The Pink Baby Yoshi balloons up when activated, acting like a hot air balloon for Mario to cross over chasms and fly high into the sky. THe Blue Baby Yoshi spits out a swath of bubbles that can imprison enemies, turning them into coins. Lastly, the Yellow Baby Yoshi is used to light darkened areas and can stun nearby baddies.

Even with all of these helpful new items to Mario and the gang's arsenal, the Wii U sequel might just be the most difficult of the New Super Mario Bros. series yet. It poses a great, fun challenge that will demand the greatest platforming prowess from players. Getting through levels is enough of a challenge, but when you add trying to collect all three Star Coins that are hidden or placed in hard locations in each level, you get a lot of welcomed hardness.

The Star Coins are necessary to unlock levels in the ninth world of the game. Gathering all of the Star Coins in a given world opens up a level in world nine. Going back to the hardness of the game, these final levels are seriously twisted in their design. Prepare to lose a lot of those lives you have been saving for the right occasion. World nine is the right occasion.

Like the Wii version before it, New Super Mario Bros. U features multiplayer, which is an absolute grand old time, with or without a packed room. This time around up to five players can have some entertainment. Four players control Mario, Luigi, Blue Toad, and Yellow Toad, and the fifth player can use the Wii U GamePad to place helpful rectangular blocks for the other players to leap on. (Or to completely mess them up!) This is known as Boost Mode. It makes reaching and surviving certain Star Coins in the game a breeze when the GamePad player can simply place a series of blocks leading to it.

There are other modes outside of the main story such as one where you can choose to play as your Mii. The level scrolls automatically. The more coins players collect, the faster the screen scrolls. In addition to that, there is an updated Coin Battle mode that puts the Wii U GamePad player in charge of placing coins in a level for the other players to collect. The person with the highest coin count at the end of the level wins.

Finally, there is Challenge Mode. This puts even the most adept 2D platforming champion to the test. You get multiple trials across various categories that you try to earn medals in. Some are as simple as timed foot races, but others ask more of you, such as dodging the fireballs of a Fire Brother for a set period of time, running through a level without killing any enemies, or bouncing off the heads of foes for 1UPs, being careful not to touch the ground. There are even challenges that require two players, one with the Wii Remote and one with the Wii U GamePad. The GamePad player places platforms for the Wii Remote player. Both players need terrific teamwork to complete these challenges.

The characters in New Super Mario Bros. U control well-- any time not on ice, that is. It seems that in this sequel the ice is much more slippery than in past games. Nonetheless, NSMB U can be played with the Wii U GamePad or the Wii Remote. The benefit of the former is that you can play the game entirely on the GamePad and use the television screen for something entirely different. Perhaps catch the Super Bowl in February while trying to take down Iggy Koopa, for instance. Also with the Wii U GamePad, you need not shake it to do a spin in midair, though you can if you really want. All you need to do is press a button

The New Super Mario Bros. series is oftentimes frowned upon for its presentation. Those who deride the series's art style will most likely continue doing so with New Super Mario Bros. U. The game features the same sterile and clean aesthetic from past games, but this time it is all in glorious high-definition. By far the most impressive part of the package aesthetically are the beautiful backgrounds. The first world, Acorn Plains, possesses one of my favorite backgrounds. Things aren't so lively on the sound side. The music is mostly stuff taken from New Super Mario Bros. Wii. There are new tracks such as the world map and athletic themes, but considering this is Mario's big debut on a new console, the fact that there are that many recycled tracks is lazy and inexcusable.

New Super Mario Bros. U might not set the world on fire with its innovation, but it does deliver a satisfying, if not an expected, layer of fun. Perhaps it was the release of two New Super Mario Bros. titles in the span of four months, but I am getting to a point where I am going through the motions with the NSMB series. Yes, it's entertaining as always. Yes, the levels are well designed as always. Nonetheless, something has to change with the New Super Mario Bros. franchise. The "New" in the title can only go so far when Nintendo refuses to considerably change the formula. Ironically, at the end of the day, "New" Super Mario Bros. U feels like more of the same. However, that "more of the same" is still so much darned unadulterated fun.
Review Page Hits: 0 today (1,227 total)
mediahook