Who you callin' cute? 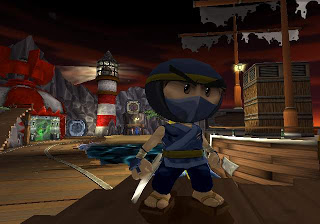 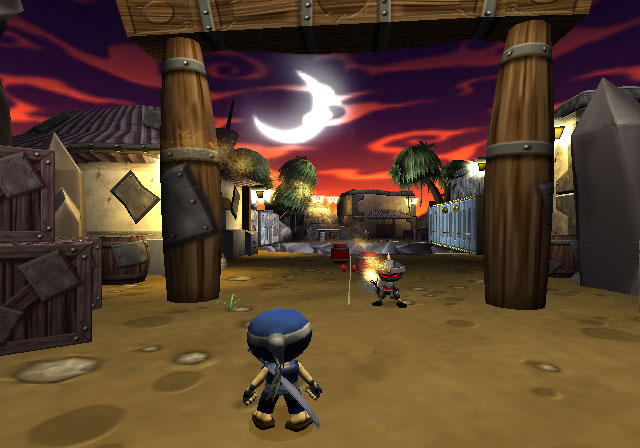 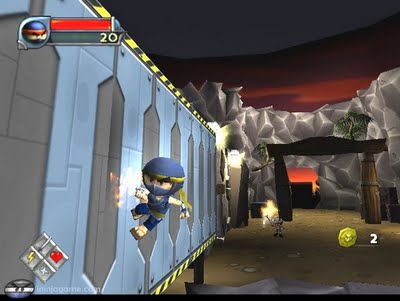 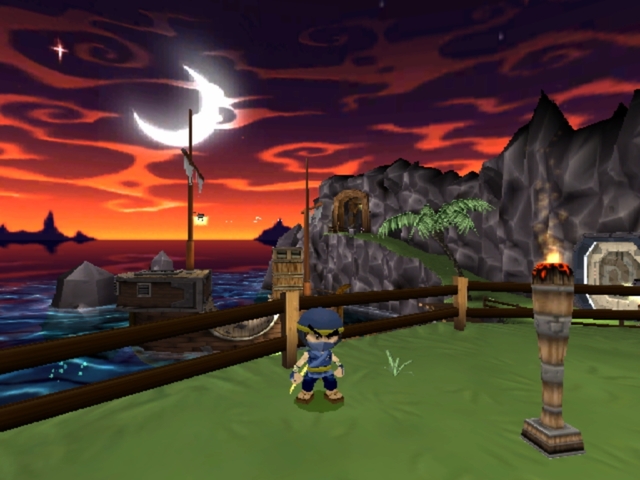 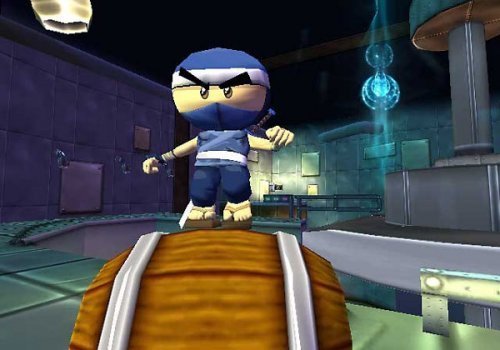 I love the sixth generation of gaming consoles. I think one of the main reasons aside from it being the generation when I was in high school is that there was a great range of low, medium, and high budgeted games available to play. There was an immense amount of risks being taken, and the variety of software was like nothing we had ever seen. All three consoles: the PlayStation 2, GameCube, and Xbox (four if you'd like to count the Dreamcast, too) offered an amazing variety of games.

Since I was in high school, I didn't have the money to look into a lot of games across the consoles and handhelds I had. However, as I've grown up and prices of sixth generation software has gone down, I've been able to invest money and time into games I had missed out on. One of these is a Namco-published game called I-Ninja. It always looked fascinating and fun to me, and while the gameplay really shines, some questionable design choices left me a bit flabbergasted and disappointed.

I-Ninja's story is as basic as basic can get. Upon attempting to rescue his sensei, our protagonist, simply referred to as Ninja, interacts with a special stone. It sets him off in a maddening rage, and he absentmindedly strikes down his sensei in the process. Quick to bounce back from a setback, Ninja's sensei informs him of a nefarious evil that is planning something horrid, and needs to be stopped. Ninja's sensei tags along Ninja's adventure, providing advice, level details, and comic relief. He and Ninja are pretty much the only two characters that get much screen time, as every other character is a one-off appearance that is over as quick as a sneeze. If you want character development, stick to your soaps... or whatever you kids watch these days on your satellite radio or whatever.

Ninja controls exquisitely, and it's a total blast to play as him. He slices, he dices, he carves a mean steak-- okay, maybe that last one is stretching the truth a little. The point is that Ninja has two sword maneuvers to him: a standard slice and a rotating spin slash. Enemies can quickly bring up their guard, so it's important to not just mash on the attack button and expect to win. Instead, you should circle around their back, or wait for them to initiate the beginning of their attack animation to deal damage.

Besides being a killer ninja, our hero is quite nimble, too. He can perform a traditional double jump, he can twirl his sword in the air to cross small chasms and extend his distance from a jump, and he can throw shurikens and shoot darts out at enemies. Additionally, he's able to swing across gaps by hooking on to specific chain loops, wall jump, wall run, speed up walls, and so much more. Every move is available to Ninja at the beginning of the game, aside from special moves like spells that improve attack and heal damage that are called upon by a tap of the direction pad.

Levels in I-Ninja are generally linear point A to point B deals. There is really no reason to scour these levels for secrets, as there are no other collectibles to be found besides the main one, Grades. These serve as each level's goal, having you perform a specific task to acquire them. While many are just "get to the finish", some are more interesting, like riding on top of an explosive barrel, avoiding flame jets, as you bring the barrel to a cage that it can destroy, netting you the Grade.

As you earn Grades, you become steps closer to upgrading your belt color, starting at basic colors like green, blue, and red and trying to get all the way to a black belt, though that is optional. When your belt is upgraded, so is your health, plus new doors become unlocked. Think of this like Super Mario 64's doors and their Power Star requirements. Instead of, say, 40 Power Stars to open a level door, instead you need a certain belt color or better to enter a level. This means that you can't just play normal levels once and never go back to them. You're forced to redo levels for different challenges.

This is annoying because many of the challenges that are available in levels after they are beaten simply feel like filler, something to artificially extend the longevity of I-Ninja. There are just so many times that I can play the same linear level with the only changed rule is that this time I have to kill so-and-so number of enemies, or this time I have to beat the level before the clock runs out. The latter is obnoxious, because some levels are six minutes long. If you fail at these, guess what-- you just wasted six minutes, especially if you did well the whole level and only messed up one costly jump.

Not only are many repeated trips to levels rather tedious, there are also levels that just grate on the nerves. I'm mostly referring to stealth levels, where you have to tiptoe and stay out of the sight of sentinel robots. One view on Ninja, and they teleport him back to an earlier part of the level. This also undoes any progress that you made after the most recent checkpoint. However, those levels still have a lot of fun to them. A level that doesn't, however, is one in the second hub of the game, where you have to man a turret, and we all know that turret sections are seldom not a slog. This one is a long four-wave one, too, where one enemy ship that slips by your defenses means you have to restart it from the very beginning.

Aside from typical levels, there are special challenge levels which are unlocked by paying NPCs in each of I-Ninja's five hubs. These task players with quick platforming challenges like grinding on a series of rails or even going full Super Monkey Ball and having you control an orb down an obstacle-laden course. These earn you Grades for finishing them as well. Unfortunately, you needn't seek out many extra Grade opportunities outside of the ones required to beat the game, as the reward for 100%-ing I-Ninja is not worth it whatsoever, a battle arena against multiple enemies. That's it.

The bosses don't fare much better. Instead of playing to the game's strengths, its core gameplay, the slicing, dicing, and platforming of Ninja, the developers thought it'd be wise to throw in completely unrelated gameplay segments and tie them to the boss battles. The first boss is a clunky Punch-Out!! inspired affair, and the second has you piloting a submarine. None of these resemble anything out of what the majority of I-Ninja has you doing, and it's baffling to me that the developers had the awesomeness that is the gameplay, and instead of crafting clever boss battles using the game's traditional action-platforming mechanics, they shoehorned in alternate gameplay styles that simply fall flat. I get that games need variety, and that's a box you can check for I-Ninja, but when it's at a detriment to the game, there's a problem here.

I-Ninja shows that the sixth generation of game consoles haven't aged as poorly as the one preceding it. Levels are full of interesting and impressive geometry, visual effects like explosions and debris are well done, and characters having a lot of personality to them in their animations and models. The music is a mix of rock, synth, techno, and other related genres. It sounds good, but I'm having trouble recalling anything from it. The voice work is enjoyable with Billy West doing his Stimpy voice as Ninja, which was a shock to the system, as his voice didn't really fit the cute looking Ninja at first. Meanwhile, the sensei delivers sage wisdom, usually mixing up metaphors to a humorous effect.

It's a damn shame that I-Ninja's brilliant gameplay and controls are overshadowed by the bizarre design decisions of the developers. They had a really great thing going with the excellent gameplay, but the need for so much filler, and quite frankly, moments where I felt my time was not being respected, bring the game down considerably. What would otherwise be a fantastic game to recommend wholeheartedly is dashed by inept boss battles that throw aside I-Ninja's stellar action platforming for gimmickry, a camera that doesn't always behave like it should, and repeating the same levels over and over again with slightly different objectives each time. Did I mention it's a damn shame yet?
Review Page Hits: 0 today (368 total)
mediahook