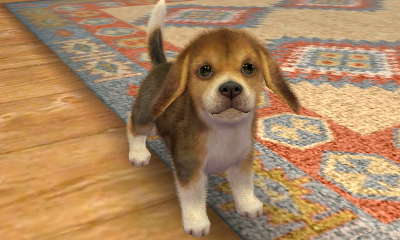 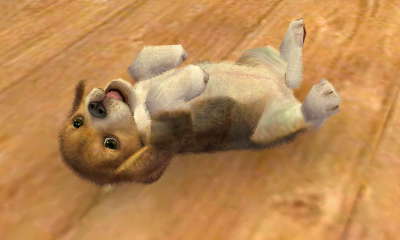 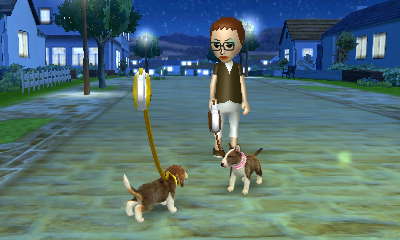 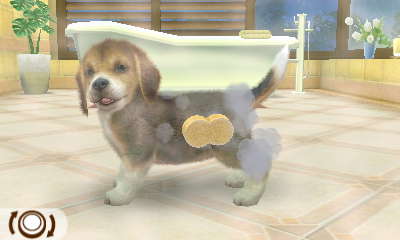 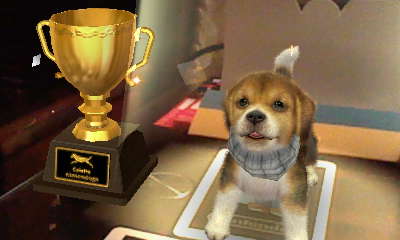 Originally released in 2005, Nintendogs was a smashing success, ending the Nintendo DS's significant drought that plagued the portable's first year. Nintendogs, along with Advance Wars: Dual Strike, Kirby: Canvas Curse, and Mario Kart DS, started the onslaught of excellent software for the system that continued up until last year where the release of the 3DS, the DS's successor, occurred. With its launch came a brand-new puppy-petting simulator with the addition of furry felines in Nintendogs + Cats. Coming in one of three versions, will Nintendogs + Cats replace your desire to get the real deal?

It doesn't matter which version of Nintendogs + Cats you get as you'll eventually be able to unlock all of the various breeds available. The only significant difference between versions is what breeds are available to you to begin with. There's twenty-seven unique breeds to be had such as German Shepards, Golden Retrievers, Miniature Dachshunds, Pugs, Beagles, Cocker Spaniels, and Great Danes, to name a handful. The game begins with you going to the kennel and playing with the puppies, choosing a breed, selecting a coat or color for them, and then taking them home as the newest member of your virtual family.

At first your puppy will be incredibly shy and untamed to their surroundings. After multiple petting sessions, your pet will grow accustomed to you and its new habitat, and be ready for you to give it a name. You must teach it its new name by speaking clearly into the 3DS's microphone (located under the start button). Each time you say the name when you want to call your puppy, you must do so with the same tone of voice, same volume, and same distance away from the microphone. If you don't do this, your puppy will become clueless, and you will have to start the process anew. Once your pet finally learns its name, you are asked to input the name via a virtual keyboard.

After your beast has grown to know its name, you must teach it to sit down before you are able to progress further in the game. Learning tricks is a big part of Nintendogs + Cats, and learning to sit down is paramount to having your dog listen to you. Once you've followed the tutorial, gone over the steps to get your puppy into the sitting position, and you've said "Sit down" a few times to cement the command into your puppy's brain, a new trick will have been discovered. The game then asks you to write the name of the trick down for your memory.

From then on you are given free reign to do as you want with your perky puppy. You can go on to teach new tricks by reading the easy-to-follow tutorials (your animal can only learn three tricks in a given day), go out for a walk, go shopping, pamper your pet, lounge around your house, take photos with L or R, or enter one of three unique competitions. The choices are yours. If you wish to lounge around, you can use the touch screen to call your puppy over, rub the stylus over the silhouette to give your animal a good rub down to satisfy them for a brief period of time.

If you opt to go for a walk, you hold a virtual leash as your pet saunters or dashes through a linear corridor of homes on a daytime or nighttime street. Your puppy will roll around and get dirty or urinate in patches of grass, take a poop (don't forget to clean up afterward), discover presents lying on the street, and meet other Miis' pets while walking the streets. Sometimes your pet will make new friends while others they'll make new enemies. Walks in Nintendogs + Cats seem downgraded from the original DS game as you no longer draw and plot a course through the neighborhood. Instead it's simply a boring linear path full of annoying distractions that your puppy will constantly stop for.

Of course, taking walks not only is tiring for the trainer/owner, but it's exhausting for the pet as well. As time goes by, your breed of choice will grow hungry and/or thirsty. From the touch screen you can lay down bowls of chow and water to satiate your pet. If your puppy gets too dirty (you can check hunger, thirst, and cleanliness levels in your journal), you should bathe them. By scrubbing them with a soapy sponge and then cleaning them off with a shower nozzle, your pet will go from drab to fab in an instant. Squeaky clean, just the way I like it.

Through spending copious amounts of time with your faithful pet, you can mold them into an obedient little creature-- at least enough to enter them into one of three contests. There's the Disc Competition where you chuck a flying disc out, and it's your dog's goal to catch it. The further away from you they catch it within their gums, the more points you get. Then there's Lure Coursing where you use a lure to lead your pet to the finish line. The best time wins. Finally, there's the Obedience Trial. Having learned multiple tricks, your puppy is tested on how well it can show off those hopefully mastered tricks. For instance, one round your puppy will be asked to sit down for two seconds while another you'll be asked to give your puppy as many different commands as possible within the time limit. The Obedience Trial uses the 3DS's prepackaged AR Cards to have the competition live in your room, your dorm, or wherever. For each contest completed (each contest has multiple levels), you earn cash that can be spent at the game's numerous shops.

Shops are aplenty in Nintendogs + Cats, and they run the gamut in usefulness. Pet Supply has food, drink, toys, and a load of other things to spend money on while the Accessories shop has hats, glasses, and other fashionable fun for your animals to wear. Meanwhile, Interior Designs has multiple furniture for your house or you can choose to completely renovate your room to one of many various themes like tropical and Asian. The Secondhand Shop takes items found on your walks with your puppy and allows you to sell them for hard cash or trade them for cool toys like an RC helicopter which your puppy will intently follow and play with. Then there's the Kennel where new puppies and even kittens can be purchased. Finally, the Pet Hotel allows you to hold a dog or feline, or you can even say goodbye to one permanently. How cold.

Kitty cats act uniquely from puppies. For one, they cannot learn tricks. They also tend to themselves much more. Occasionally, however, they will bring in presents for their owner.
Furthermore, they like high spaces, so buying furniture with high ledges is always a plus for these precocious little kitties. You still have to take good care of your fearless felines, but I am of the stance that more could have been done to make owning a cat worthwhile. I am just not feeling it. Dogs are just more interesting to own while cats are just "there."

For the graphics aficionado, Nintendogs + Cats is a fine showcase of the 3DS hardware for a launch game. It doesn't have the most interesting use of the system's stereoscopic 3D (Pilotwings Resort is a launch title that beats it), but your puppy or feline comes with a fair amount of depth. Turning the 3D off gives each animal and environment less jaggies as is the usual with 3DS games. On the audio side, the coos, barks, and meows of your pets sound authentic enough, and buying CDs and music for your pups and kitties to listen to will make them act in several different ways. There's even a sweet jazz version of the Nintendogs theme to own.

Nintendogs + Cats seems more like a tech demo for the multiple uses of the 3DS than an actual full-fledged game. It is most certainly not worth the forty dollar asking price Nintendo wants for this title. Even with the addition of cats, there seems to be even less to do somehow than there was in the 2005 DS original. Calling your animal's name or commanding them to a trick can be an effort in frustration as you have to remember the tone of voice you originally uttered when you first gave their name or said the trick aloud. Even then your puppy can confuse one trick name for another (such as "right" and "left"). Regardless, Nintendogs + Cats won't replace the fun of having a real life pet, but for those allergic or not wanting to deal with the shedding, constant pampering, and so forth, the game (whichever version you get) is average at best and worthwhile if you feel the burning desire to have a virtual pet of your own (and your pet rock died a long time ago).
Review Page Hits: 0 today (590 total)
mediahook