No One Lives Forever -- Game of the Year Edition (PC)

This is the 'Game of the Year' edition of the excellent FPS/Action game No One Lives Forever. It includes an extra mission at the end of the game, and a bonus music CD. 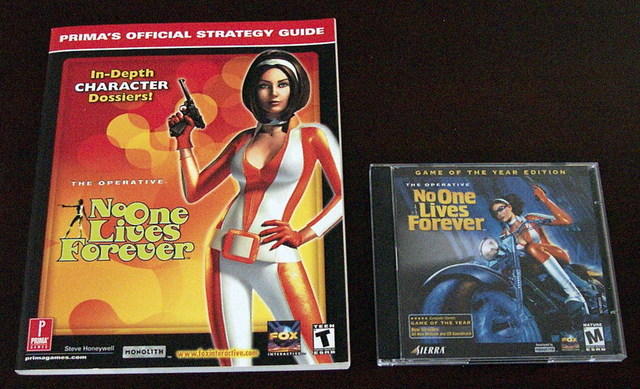 The graphics and gameplay are the same in this GOTY Edition; none of that has been updated or changed. For that reason, those scores remain the same.

The extra mission was entitled "Rest and Relaxation," and it was fun. There was about 4 or 5 different parts (scenes) to it, so it was somewhat lengthy, as well, which is a good thing. I had no idea when this extra mission was going to be incorporated into the original game, so I played through the entire game again. I found that it starts immediately after the credits, and during the final briefing, your bosses hint at where it might take place. As I said, it was a very enjoyable extra mission, in which you get too use all of Cate's gadgets -- and you even get to ride the motorcycle again.

I was able to pick up the strategy guide through a trade, and I used it when I played this the second time through. It does not cover the extra mission, but it does cover ALL the other missions. But the main issue that I found when using this guide was that finding as many of the intelligence items as you can during missions does help considerably. You will get substantial bonuses. They can be found in areas like 'Stealth,' 'Reputation,' or 'Damage.'

The other bonus item that came with this edition of NOLF was a music CD. It features the 60's style music that is heard while playing this game. Put on your bell-bottoms when playing NOLF and help Cate Archer save the world from terrorist scum.

As I mentioned in the summary, I believe that this is the version of NOLF that the true fan of this game should have. It provides more gameplay enjoyment than the original, and you can never go wrong with Cate Archer.