Have Kart, Will Gobble 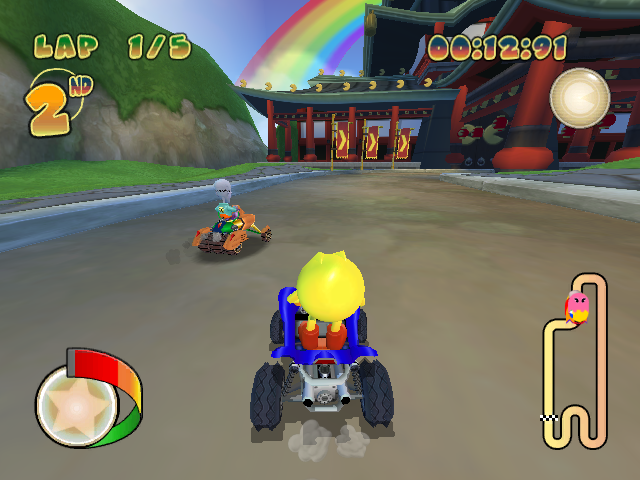 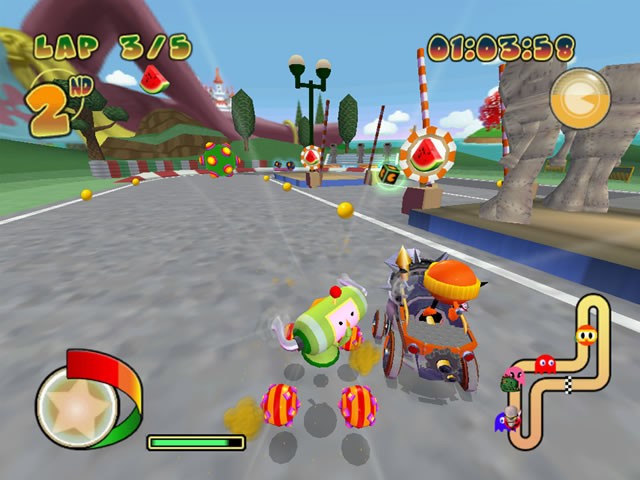 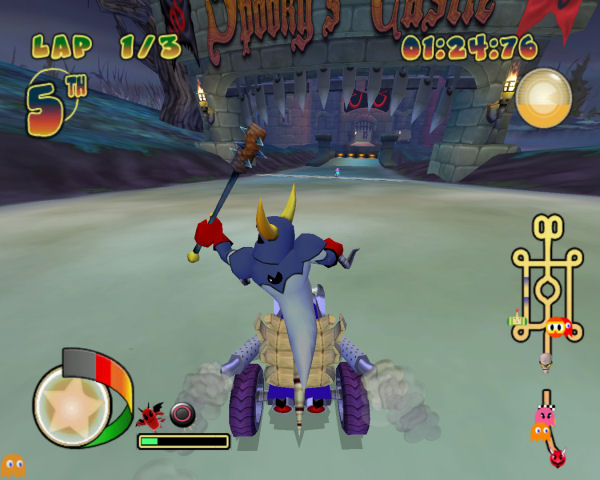 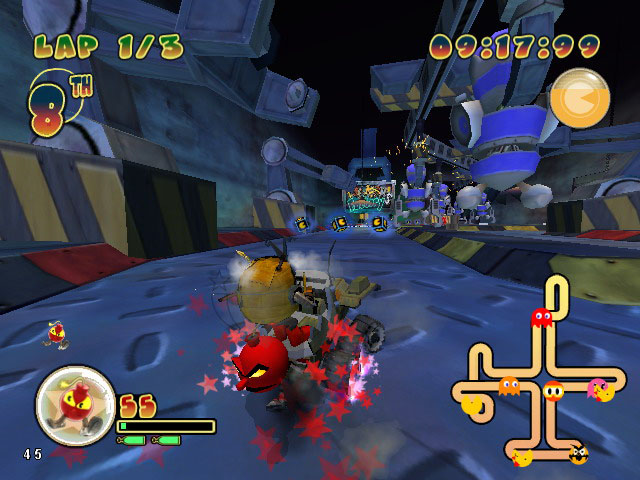 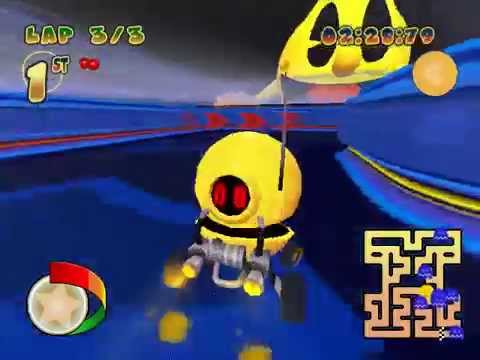 It's pretty much guaranteed that if you are a major video game mascot that you're bound to be a part of a racing game of some type, usually modeled after Mario Kart, the king of arcade kart racers. That was the case with Crash Bandicoot, it was the case with Sonic the Hedgehog, and in the mid-2000s it was the case with Namco Bandai's Pac-Man. Pac-Man World Rally may not be the freshest kart racer around, nor the most challenging, but it does offer a good deal of enjoyment for players, especially for younger ones and those young at heart.

The feel of each kart in Pac-Man World Rally is rather pleasant. No matter the racer's vehicle, that has each possessing different stats depending on the character, I always felt in control. Drifting is handled wonderfully and actually seems to have beat Mario Kart to the punch in how building up a boost is handled. Rather than wiggling the analog stick back and forth during a drift to build a boost, you simply hold your drift as long as possible. The longer you hold the drift, the better the ending boost you get from it will be.

Items in Pac-Man World Rally don't deviate too far from what is expected from kart racers of this style. Really, every item in the game has a Mario Kart equivalent, whether it's green bombs that run along the track, bouncing off walls until they hit a target; red bombs that home in on whoever is ahead of the player; red item boxes that are hazards; and so forth. Though there are some more interesting items like snowmen that freeze enemies upon contact and unlockable items won through gobbling up a particular number of racers in a given cup.

How does one gobble up opponents, though? Well, an intriguing and totally Pac-Man take on the kart racer is implemented in World Rally. Along the various tracks of the game, there are power pellets that players can collect. Collecting these fills up a circular meter. Once it is totally full, the player can hit a button and turn into a Pac-Mobile. In this limited timed form, every other racer is turned into a helpless ghost, able to be gobbled up by the Pac-Mobile player. It makes for an innovative Pac-Man-like contribution to an otherwise bog standard kart racer.

Though that's not totally fair, as Pac-Man World Rally does take its influence from the Pac-Man series to its tracks as well. Shortcuts are mostly found through collecting fruit. If you have a certain fruit in your collection, you're able to enter into an area blocked by that fruit's gate, giving you an edge over the competition. Early tracks in World Rally sport one shortcut that uses this tactic, but later ones have multiple shortcuts blocked by gates that need you to collect a specific fruit to use them.

Pac-Man World Rally has four cups of four races each, save for the final cup which is a cup that features every race in the game in one lap form. Races have a varied number of laps between them with shorter races having more laps than the longer lapped ones. Questionably, World Rally's PSP version is the one that sports the full roster of 16 tracks while the other versions of the game just have 15. Since the multiplayer is limited in the PSP version, it makes all of the versions of World Rally gimped in some way. Regardless, races take place in a variety of areas and locales, from an oriental garden in the sky and casual cruise down canyon hills to a spooky haunted mansion and robotic factory.

Thankfully, World Rally doesn't suffer that much from rubber-band AI, a problem that many kart racers use, including Mario Kart, to make the game more challenging. At the same time, that makes Pac-Man World Rally an incredibly easy game when competing against the AI. Easy and Normal difficulties have it where you can effortlessly win a race by more than thirty seconds, whereas even the hardest difficulties don't make you break much of a sweat, though they do offer more challenge. If you're looking for a kart racer to make your adrenaline run and heart race, then Pac-Man World Rally probably isn't for you.

Pac-Man World Rally isn't a bad game, but it's not particularly a great one either. The track design is serviceable while the controls are mighty responsive and work well. There's just not too much that distinguishes the game from other kart racers of its type, and what it does try to do to separate itself isn't that notable or particularly cool. Still, World Rally can be found for a cheap price, so it's worth a look if you're searching for a new kart racer that won't offend but won't overly excite either.
Review Page Hits: 2 today (347 total)
mediahook