A sensational platformer by design, but gamers are a bit removed from the gameplay. 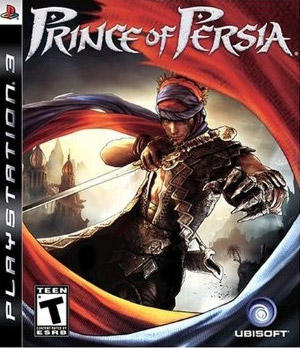 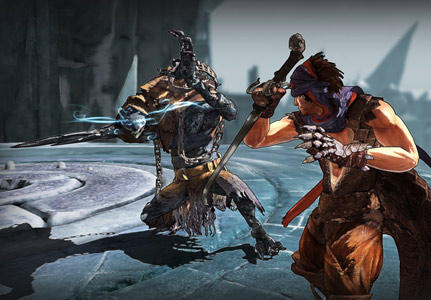 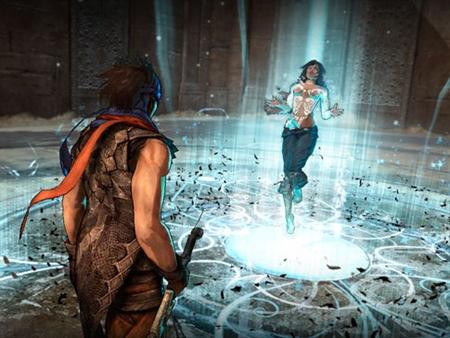 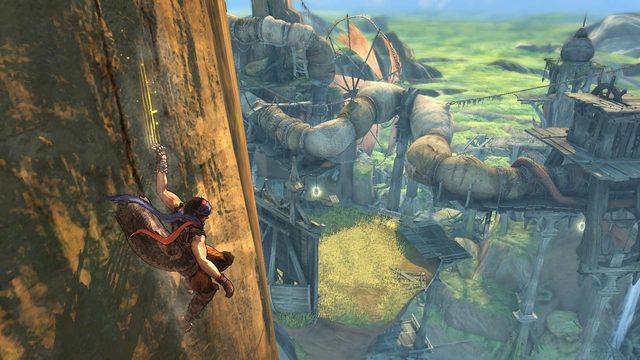 From beginning to end, Prince of Persia is beautiful. The colorful characters, vibrant landscapes, stylish designs, and eloquent score illustrate the story of the Prince and Elika as they try to access the Fertile Grounds in order to rid the kingdom of the corruption wrought by a dark god. To get to these grounds, the Prince and Elika must work together and use a variety of acrobatic leaps, grabs, and slides to traverse the lands. Watching all this is a pleasure, and though player interaction is diminished to just a few simple inputs in these situations, the latest incarnation of Prince of Persia is sure to move you with its deep battle system, sincere characters, and their graceful venture into darkness.

Ubisoft has done amazing work here, as the Prince and Elika's transitions from one movement to the next are smooth and rhythmic. Chaining together acrobatic moves is so gratifying in part because it looks so good. There's also something almost exotic about watching the Prince and Elika move together: the way he carries her as he scales walls; the way their hands clasp when she reaches out to save him. There is an instant intimacy between the two, forced upon them by their mission, and they allow it to blossom into a playful, but also legitimate relationship. This is played out in cutscenes as well as player-initiated conversations (both of which feature superb voice acting), but you can also catch glimpses of it as the two deftly travel throughout the kingdom. Seeing the two interact as they weave around platforms and carom off walls is exciting and fun to watch, and thanks to great level design, platforming is also often exhilarating to take part in. It has been crafted to get you from A to B with hardly any contrived sequences or platforms; it isn't needless or forced on you by silly puzzles, but is instead a legitimate way to reach your next destination.

Unfortunately, the biggest highlight of the game contains the biggest downfall. Because many of the animations are automatic, your control over the Prince is limited throughout most of the platforming. To crawl across a ceiling for instance, all you have to do is press jump at the top of a pillar - the Prince will automatically flip upside down onto the ceiling and crawl towards the next pillar or hook. Initially, the platforming is difficult as it takes time to get a feel for all of the Prince's moves and when to use them. But after half an hour or so, the Prince's repertoire becomes natural enough that chaining leaps, double-jumps, and wallruns in the right places and times becomes instinctive. For this, Ubisoft deserves a lot of credit - a character so athletic and agile has never been this easy to control in 3D before. But again, this is in part because the game does a lot of that controlling for you. It's still enjoyable because it's fun to watch the same way a fight scene in The Matrix films is fun to watch, but having little control in platforming takes away some of the satisfaction in it.

This is hardly a problem in the game's combat system, though. Fans of the PC or SNES adventures should be familiar with the parry/counter-attack setup. Prince of Persia has moved away from the multi-enemy combat found in the last generation of games in favor of one-on-one battles. Enemies are few, but they can be difficult (especially the repeated encounters with the bosses). Other than attacking with a sword, the Prince can build combos using his gauntlet, some acrobatic moves, and Elika's magic. Your foes are adept at parrying your attacks and counter-attacking, and you must do the same. Thus, battles have a dance-like quality to them: there is a fluid back and forth to the action, timing is essential, and planning your attack and awareness of your surroundings go a long way. There is no button-mashing here - a good sense of the combo tree and combining your offensive options are important to survival. At least, it would be if you could die.

As it is, Ubisoft has foregone death in favor of a merciful checkpoint system. Elika will catch you should you fall during a platforming sequence and bring you back to the last solid ground you stood on. She will also blast an enemy who is going in for the kill when you're too weak to defend yourself, giving you a moment to recover. While this does make the game too forgiving, it also keeps the game moving at a nice pace; the lack of death scenes and loading screens supports the smooth, constant movement from the opening scenes all the way to the end credits and heightens the sense of urgency in the narrative by refraining from breaking the momentum of the Prince and Elika's maneuvering about the land.

Gameplay with such a paripatetic nature should be enough to keep Prince of Persia fresh throughout, but unfortunately, it suffers from some repetitiveness. Upon purifying a Fertile Ground, Light Seeds appear in the surrounding area - the area you just traveled through to get to the Fertile Ground. These Seeds are necessary for Elika to gain access to magic plates located throughout the world. The plates, when activated, bounce you to another plate or onto a previously unreachable area from which you can reach more Fertile Grounds. As such, the Light Seeds are necessary to collect in order to complete the game, which means running through areas for a second time. Now purified, the black goo that previously tainted many of the walls and platforms have been obliterated, giving you access to some new platforms but you are still essentially playing each area twice. Because the platforming is so purposefully designed, the experience the second time around is too similar to your first.

This is the only issue that really slows Prince of Persia down. Everything else keeps the characters and story in motion, and it's a fascinating thing to be a part of. The player's role might be a bit too small in some places, but what little sacrifices Ubisoft asks you to make in controlling the Prince they more than make up for in aesthetics and storytelling. Thus, the joy in the game isn't just in playing it - it's also in taking part in something that is both simple and beautiful, with characters complex, and a world so dark. And as you guide the Prince and Elika: sliding, climbing, leaping, and running, you can't help but be a little moved by their dependent relationship; their hope and urgency; their grace, their story - the beauty of it all.
Review Page Hits: 0 today (111 total)
mediahook