Prince of Persia: Warrior Within (GameCube)

What could have been fantastic, winds up unpolished and laden with fan-service. 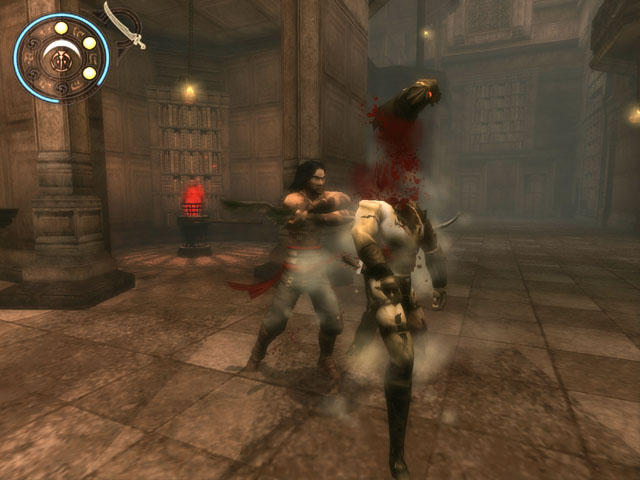 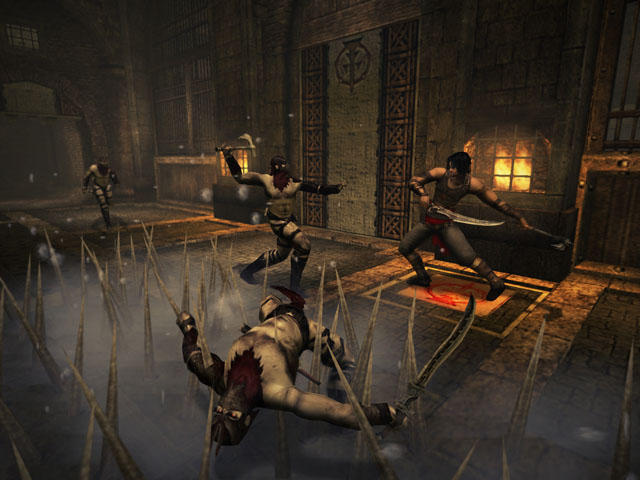 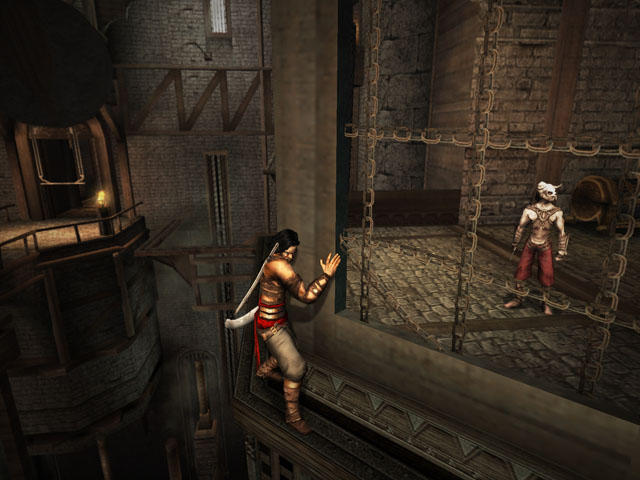 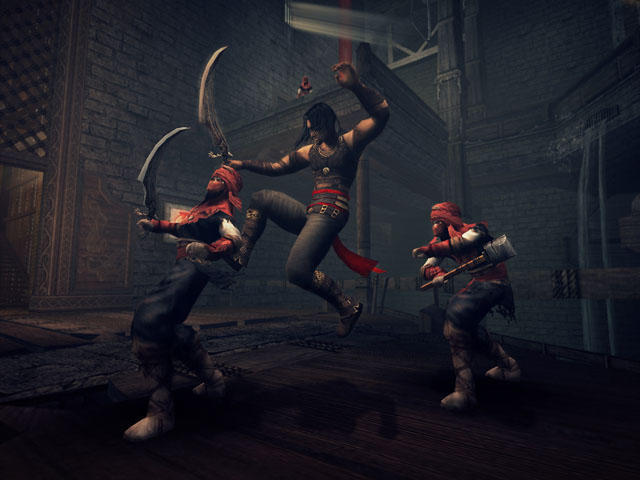 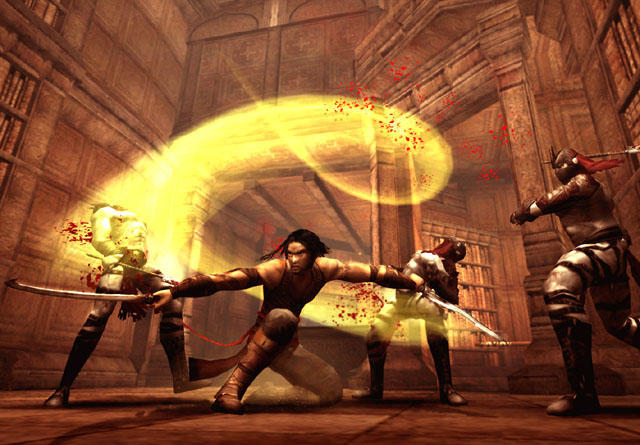 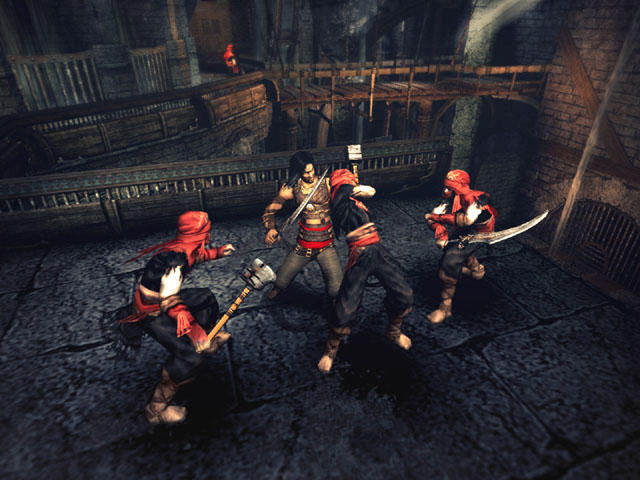 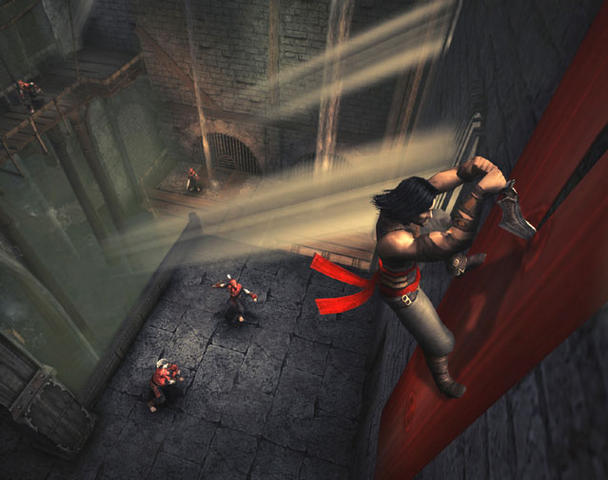 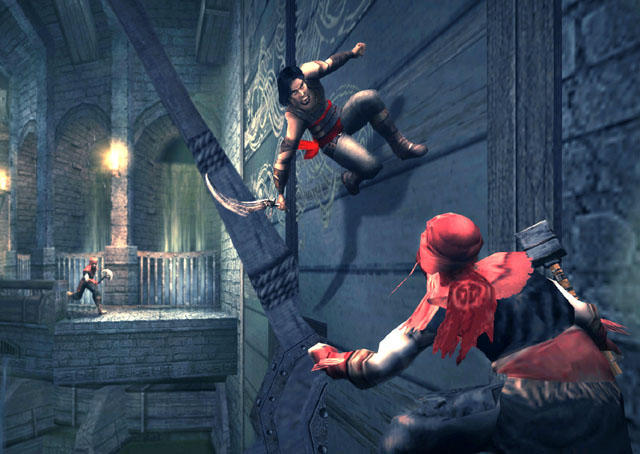 If I did not find it a good game, so much of my weekend would not be spent playing Prince of Persia: Warrior Within. That said, there's plenty in it that makes me want to head up to Montreal and whack some people over the head with a rolled-up newspaper.

After the events of the first game, the nameless Prince (actual in-game dialog: "Who are you?" "I am the Prince of Persia") finds that not quite everything was swept under the rug by his exploits. The fearsome Dahaka made a note of the Prince's reckless and rampant butchering of the time continuum. Being judge, jury, and executioner, the Guardian of Time is now out to make the Prince pay for his crimes. The Prince, of course, will not go willingly -- he instead seeks to go back to stop the Sands of Time from ever being created. Standard modus operandi there.

The Prince of Persia titles have always been hybrid action/platformer/puzzle games, and Warrior Within is no exception. As in Sands of Time, much of this involves various time-manipulation abilities. There are two notable changes to the gameplay in this installation, however. One is that combat is much more refined, interesting, and enjoyable than it was before. The Prince has a large variety of creative combo chains and environment-dependent moves in this outing. Accompanied by an increased level of gore, this yields a feel much akin to the BloodRayne titles. The other major change in gameplay is the amount of backtracking now required -- whereas previous games rarely had the player visit an area more than once, in Warrior Within one travels though parts of the castle(s) numerous times in the main quest and a few more times still to find health upgrades and unlockable art.

That is somewhat unfortunate due to the game's other advertised "innovation" -- a dual world system similar to that of The Legend of Zelda: A Link to the Past, Castlevania: Harmony of Dissonance, and The Legacy of Kain: Soul Reaver. Instead of dimensional travel, however, the Prince travels between past (an intact castle) and present (a ruined castle). While this would have been a golden opportunity to implement a system similar to Chrono Trigger's, wherein actions taken in one time period affect the shape of later time periods, Ubisoft Montreal simply treats them as slightly different worlds and an excuse to recycle level layouts and puzzles with only minor changes. Given the symmetrical nature of certain areas even within the same time period, this means the player will be often forced to go through the same routine four or more times.

As with previous PoP games, the solution to each area is quite linear. That's not necessarily a flaw -- it's something expected in the puzzle genre. However, the world of Warrior Within is much more detailed than that of Sands of Time, let alone the original Prince of Persia, and that detail interferes with the player's ability to see the path to the next destination. Oftentimes the integrity level of a wall (whether it is safe to run across or not) is something that needs to be determined by trial and error, and other times the Prince is forced to make blind jumps. While the GameCube version does not suffer from the frame rate issues of some other versions, the hideous dithering does not make searching out small or distant objects easy. The vision system of Sands of Time helped guide the player to the next destination by pointing out certain features in the environment, but the player gets no such help this time around. The visor system of games like Metroid Prime and BloodRayne 2 (where certain objects are denoted with a special color when a certain view is activated) would have come in handy here.

Many 3D polygonal games are burdened by a terrible camera. While the camera is never a problem during combat in Warrior Within, it does make solving puzzles difficult at times, particularly when the Prince is in a corner or corridor. Most of these issues can be resolved by switching to the relatively static far camera and/or the first-person-view mode. Yet there are situations -- particularly in the Garden and Machine Tower areas -- where the player simply can't get a good view of the surroundings. One such situation is when the Prince is climbing up a rotating pillar and the camera angle is immutable. This wouldn't be so bad except that the Prince needs to jump off the rotating pillar to hit a switch and then again to go through the doorway it opens (for a limited amount of time). With a camera that gives a rough horizontal cross-section of the room, depth perception is impossible. Also, when an enemy is nearby, the camera sometimes switches to a view that keeps the enemy focused even if the Prince himself moves out of your field of vision. In at least one instance, an enemy can appear as the player is performing a difficult multiple wall-jump maneuver, forcing the Prince to leap from wall to wall while being entirely out of view.

The contextual nature of the combat engine also causes some frustration. While the diversity of the moves provided is compelling, there are times when the Prince is forced into combat atop a lofty perch with a wall behind him and he will accidentally perform a wall dive, slaying the enemy but falling to his own doom as well. There are also cases when the Prince will not properly "lock on" to the enemy the player wishes to target and will instead back-flip all the way back to enemy he just fled from (typically the suicidal exploding dogs).

Since Warrior Within uses dynamic camera angles merged with the two-dimensional control style of games like Metal Gear Solid instead of the three-dimensional control scheme of Resident Evil, situations arise when the player is pressing right to move the Prince right on the screen, when suddenly the camera angle shifts so that what was previously right is now down. This is rarely a problem, as the player will want to pause to take in the new hazards and map out a workable route to the next area, but there are several segments featuring the invulnerable Dahaka chasing the Prince through new areas. In these spots, taking time to re-orient the controls and/or camera may very well spell certain death. The Warrior Within camera designers seemed to take a page from the Resident Evil book by purposefully providing suspenseful camera angles, but what works in a horror game does not work in a platformer.

The game's answer to all this is its reliance on the time-manipulation abilities the Prince has access to. By spending a stock of sand, the Prince can rewind time, preventing that fatal jump from ever happening. Stocks can also be used to slow time, which is required in certain areas, and to damage enemies with special attacks. Allowing the player to undo actions should not be license for poor camera angles and leaps of faith, but in this case Ubisoft Montreal treated it as such.

One of the biggest flaws in the game is something entirely unrelated to its mechanics -- it's the lackluster script and hamfisted voice acting (particularly in the case of the female ninjas -- while sadomasochistic taunts might be fitting in BloodRayne, they're much worse than merely corny here). The latter can be alleviated to a degree by switching the language to French (the Spanish voices are just as bad as the English ones), but the Prince's annoying "Arrrrrawgh!" every couple swings of his weapon does not change with language settings. The script is a larger problem. The Prince is hardly the charismatic wise-cracking swashbuckler he was in Sands of Time. Instead he is blunt (or desperate) and entirely to the point. Dialog is entirely barebones and limited to what is required ("Where do I go next?" "Take this sword and activate the Garden Tower.") and does not serve to develop the personalities of any characters in any way. Without Farah or any other foil, the Prince is hard to identify with on his solo journey. Some would say that his desperation is what makes him flat -- if the player is willing to believe that, perhaps this flaw could be overlooked.

The levels are graphically varied and aesthetically pleasing in Warrior Within, whereas the main character models are somewhere between PlayStation (1) and Dreamcast quality and are utterly devoid of feeling. That said, certain enemies -- particularly the shadowy creatures and mini-bosses -- are appealing. Since the player will typically want to zoom out the camera, the game looks good for the most part (barring the framerate problems on the Xbox/PS2 and the dithering on the GameCube). Apart from the aforementioned voice troubles, the audio is mostly good (albeit there are audio glitches on all platforms), but not quite up to Sands of Time standards. Many areas are devoid of ambient music entirely, as before. Control is rarely a problem on its own right, although the player has to grow accustomed to the input buffering of the game engine (wall-jumps cannot be buffered at all, but attacks can be buffered well ahead of time such that hitting the primary attack button four times rapidly will perform an entire four-hit primary weapon combo even if the player tries to switch to the secondary weapon before the second swing). There are also numerous glitches that have been reported, ranging from graphical (where the Prince becomes entirely transparent) and audial (sound dropping out for up to a minute) to those involving gameplay (falling through platforms when reversing time, teleporting around rooms with moving floors, and being unable to activate switches), some of which require restarting the game to correct.

It's a pity that the game is so lacking in polish, for there's a very good game here if one can look beyond the rough edges. Had Ubisoft Montreal devoted less time to making the game "Mature" by replacing wit with vulgarity, and instead tweaked the playability, they could have had a masterpiece on their hands. As is, it's still superior -- as a game, though not as an experience -- to Sands of Time and stands one of the better games of this year.
Review Page Hits: 0 today (372 total)
mediahook