Not the BEST puzzle game, but certainly a solid meditative aid. Thumbs up. 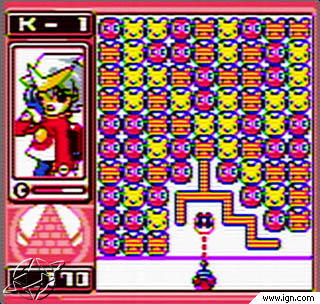 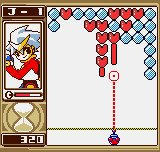 There are several modes in Puzzle Link 2. Card Game mode is the most basic. Colored tiles emerge in full lines from the top of the screen. You can advance them quickly by pressing down. You must connect two separate groups of the same color tiles. These ''groups'' may consist of one or more tiles of the same color. You connect or ''link'' by sliding your arrow, which appears on the bottom of the screen, to the same column as the color you wish to target and firing the first piece of your link at it. Moving slightly to the left or right and then firing again will create another partial link of the same color. When you add up enough partials to bridge the gap between two groups of the same color, both groups disappear and loose tiles cascade up. If these cascading tiles join together to form larger groups, they in turn disappear creating a chain reaction. Very simple. After a while, two special tiles will appear that have the letter "C" written on them. "Why 'C'?" you may ask. No reason. When these two tiles are connected via a link the entire board is cleared, and the next stage begins. Periodically you are rewarded with a new ''card,'' hence the name of this mode. These cards may be used or traded in a different mode of the game.

The second mode is "endless." This is the same as above but without the ''C'' tiles. The number of different colors on any given stage may vary from 2 to 4, plus the ''C'' tiles. While 4 tiles makes for a challenging match, but it is only the "zen" eexperience of a 2 color cascade fest on endless that results in the experience you have searched for.

In fact this ''game'' is more of a meditative tool than a simple toy. In much the same way that say Tetris DX, Puzzle Fighter, Mr. Driller, or the teachings of Buddha tend to reverberate with a player long after the game is finished, Puzzle Link haunts you. Holding out the promise of that final link that you will never make, even as you ponder possible imaginary combinations in your head as you try to sleep.

The third mode is head-to-head battle.

The fourth mode is puzzle - all clear - mode, where the game taunts you to clear the screen leaving not a single tile unscathed. These puzzles begin much as your own search does, allowing you to be baptized in the cool waters only to be damned you to the eternal churn of purgatory later.

The final mode is ''card mode,'' which is a glorified battle of rock-paper-scissors using the cards you have won in the first mode to go head-to-head, either winning additional cards or losing one of your own.

This is a fine puzzle game that will complement your life's journey as well as your NGPC collection. Better than most puzzle games, it is not as compelling as most modern religions or Tetris.
Review Page Hits: 0 today (235 total)
mediahook