Sega's OutRun equivalent on the NES. It offers what an 8-Bit Arcade Racer can offer at best and provides a great racing video game experience. 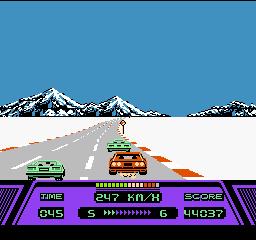 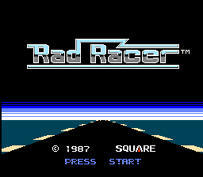 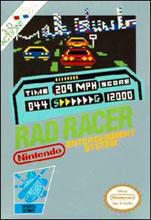 Welcome to my first review for a video game. I chose Rad Racer because it is a worthy racing game on the NES; it is probably one of the best in some aspects! Also, it is one of my favorite play-me-for-five-minutes-to-get-a-quick-rush type of games :o) Well, let me begin with the review.

Graphics
The graphics in this game are very simple and plain. Most cars do not have much detail, and the scenery is rather plain. But, on the other hand, it is nice to note that each stage has a car that is real and unique (to that stage). For example, there is a Beetle on the first stage, and then you challenge a Corvette on the second stage. Other cars include a Lamborghini, a Ferrari, and a few others. Most importantly, Square did incorporate parallax scrolling in the background scenery. For example, you can see the background separate in half and move left to right to accommodate the viewing position from your car. This is quite a nice graphical technique that was implemented, especially since this game came out in the first generation of the NES.

Game Play
This is where this game shines. You are given a choice to drive one of two cars. You can take a Ferrari or an F1 race car. Both cars run at the same speed and have no difference in actual game play. They just look different. This game may remind some gamers of Pole Position since the car handles like the one in that game. They are, however, faster, and a little tighter with a better response. The brakes in this game are spot on, akin to real-life Porsches. There are two modes of acceleration. You can speed up by simply holding the A button, or you can hold UP on the controller as well as the A button. The latter is a pseudo-turbo-boost which allows to you speed up very quickly. The BEST stage to use this boost is on the third level; Grand Canyon. There is a LONG strait-away that lets you travel ultra fast and really makes you feel like you are speeding fast.

Music
This game has good music that is fit for racing. There are three tunes in all. One or two may start off slow but they pickup the pace into the middle of the song and make you feel like you are really advancing in the race. The sound effects are also fit for this game. They are simple and mundane, but effective. For example, you really do feel that you hit another car on the side when you hear the sound effect of *DAAHSH,* or that time when you will crash and send your car flying into the air *TAAKH TAAKH TAKKH!* I always wanted the soundtrack for this game but could not find it.

Story
The story is about you driving and it gets interesting as you finish the game; I would rather not ruin it for you. The ending is better than most racing games I have seen on the NES, not to mention most games I have beat, period.

FUN FACTOR
Here it is. This is what you care about. Is this game FUN? In my opinion, yes, it is a LOT of fun. It is meant to be an *Arcade Racer*. If you can take this game in that context, you should not have any gripes. The game engine is basic and offers no simulation or upgrade ability, but it wouldn't fit the game anyways; you want fast, fun, and finish-in-a-few-minutes because you want to play an Arcade Racing game. The music suits the arcade style very well (it is fast and keeps you on your feet, or rather, thumbs

) and the graphics offer a clean environment. Play this game to have fun for a few minutes, or to get a quick rush of speed for those few moments you have left for gaming.

Closing Comments
This game is Sega's OutRun equivalent on the NES. It offers what an 8-Bit Arcade Racer can offer at best and provides a great racing video game experience. Borrow it from a friend or pick it up for a few bucks and give it a try. It is one of the most-fun Arcade Racer's on the NES.
Review Page Hits: 1 today (245 total)
mediahook