Ratchet & Clank: Up Your Arsenal (PlayStation 2)

A game that both robots and squishies alike can enjoy. 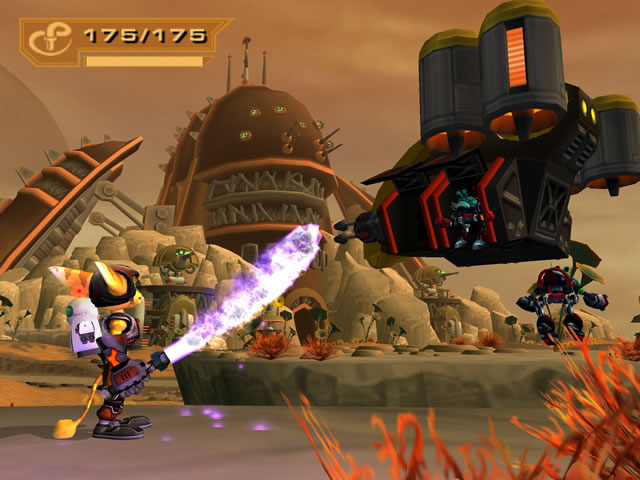 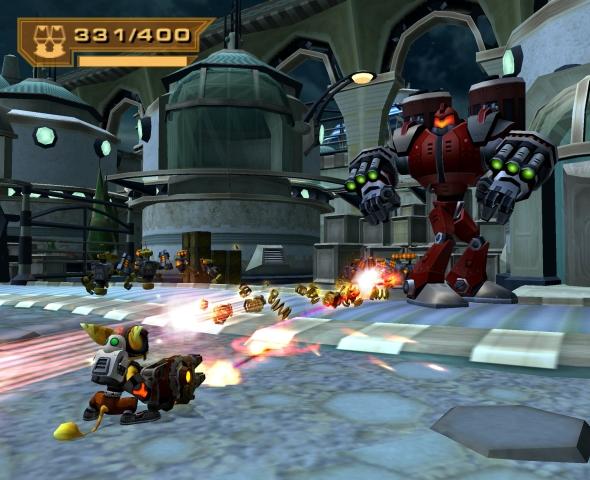 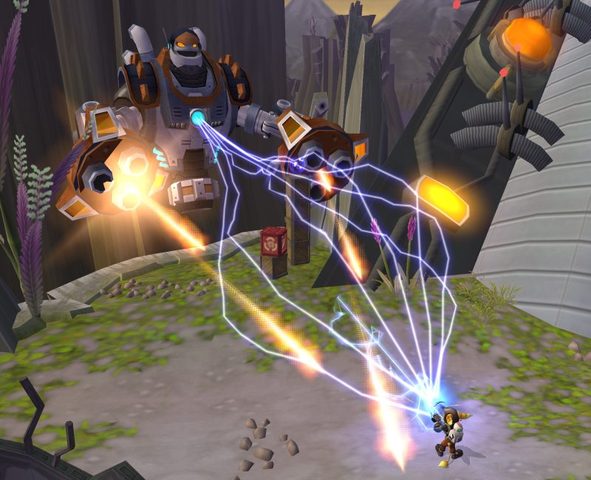 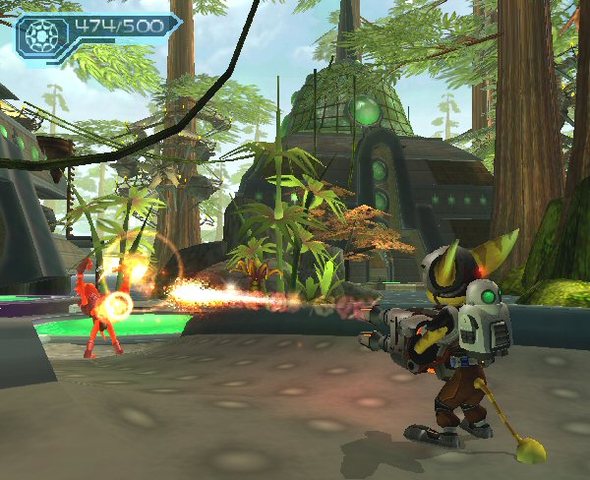 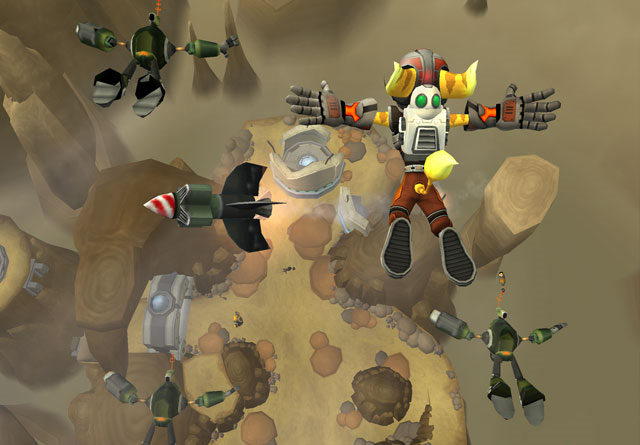 I finally got to play the reboot of the Ratchet & Clank series earlier this month, and it made yearn to play some more of the series. I had already played the PlayStation 2 original games up to Deadlocked, as well as pretty much all of the PS3 entries apart from Full Frontal Assault. Though I own the latter, the negative fan feedback put me off of playing it. Regardless, I started a new file in Ratchet & Clank: Up Your Arsenal a year ago on the PlayStation 3 as part of the Ratchet & Clank Collection. However, other more recent games got in the way of my playthrough. Long story short, playing the Ratchet & Clank reboot got me back to my old Up Your Arsenal save file to enjoy this third ever entry.

Ratchet & Clank: Up Your Arsenal follows Ratchet and Clank enjoying what appears to be a game of galactic chess, though instead of kings, queens, rooks, and knights, they have Snargian Snagglebeasts and other in-universe monsters instead. Hearing word that a group of monsters known as the Tyhrranoids, is attacking Ratchet's home planet of Veldin, he and Clank travel across the galaxy to reach Veldin and support the troops, the Galactic Rangers, trying to fend off the Tyhrranoids. This action starts off a grand galactic adventure, seeing Ratchet and Clank travel to various locales, aiming to stop a villain connected to a certain character's past's grand plan on turning the universe's "squishies", as he calls all organic lifeforms, into robots. The story is engaging, the story sequences don't interrupt the flow of gameplay too often (these can also be skipped at will with a simple press of the Start button), and the humor of the game continues the series' fine line of funniness.

Compared to its predecessor, Going Commando, Ratchet & Clank: Up Your Arsenal plays very similarly. The game is a 3D platformer with third-person shooting elements, though the latter is more prevalent and focused on than in Going Commando. Regardless, there's still a good amount of careful precision jumping on various platforms to be found here.

The new additions to the gameplay of Up Your Arsenal include Galactic Ranger missions that are all focused on combat scenarios. You team up with a gang of AI robots to complete a certain objective. Most simply have you eliminating all enemies on the battleground, whether as Ratchet himself or him inside a combat spaceship, while other missions have you protecting a batch of Galactic Rangers as they fix a turret. The latter is far from an annoying protection mission, as it's quite simple, so no worries! Regardless, these more action-oriented scenes make for some nice pacing and freshness to the game. There are also five video game cartridges that tell the adventures of Captain Qwark through a charming 2D side-scrolling platformer that is a lot of fun to play as well.

Continuing with the action focus, there is also a battle arena, a coliseum, if you will, for Ratchet and Clank to face challenges in, known as Annihilation Nation. Here, special themed arena contests are held, with the rewards being vast amounts of bolts. Some contests need you to clear multiple rounds of enemies while dodging environmental hazards like spinning blades and fiery pits. Others give you a boss to tackle, force you to fight without taking damage, or have you using just one weapon to survive. These are enjoyable challenges to do, and yes, they further add to the value of Up Your Arsenal.

During the game, Ratchet and Clank will also sometimes split up, as they did in both the original R&C and Going Commando. Clank will have segments where he teams up with a monkey to get through hazard-laden areas. With Clank's banana gun, Clank can fire bananas as a means to get the monkey to certain spots, such as on a button to extend a bridge or in a spotlight that triggers a turret gun that would otherwise kill Clank instantly, but instead, the monkey distracts the turret so Clank can pass by. (No monkey was harmed in the playing of this game.) There are also times where Clank can control up to four miniature helper robots, tasking them with following, staying put, attacking foes, or entering little houses that when all the robots have gone inside, the way for Clank to proceed opens up.

Ratchet also has some fun by himself. In one portion of the game, he dons a Tyhrranoid outfit to sneak into the main villain's aquatic base, interacting with real Tyhrranoids through burping, odd movements, and belching. This is done with a Parappa the Rapper-style rhythm mini-game that doesn't outwear its welcome as it's used sparing, and adds to Up Your Arsenal's variety.

The Tyhrranoid outfit, or guise, is one of many gadgets that Ratchet and Clank come across in their planetary adventure. Another like the Hypershot, serves as a gadget that can be used to cross chasms by linking to a hook-like contraption, and allowing Ratchet to sling across. Then there is the Hacker, which allows the opening of locked doors through playing a simple mini-game where you shoot around a circular field, blasting red lasers while tractor-beaming up green lasers to pass. Finally, things like the Gravity Boots that grant Ratchet the ability to walk up certain pieces of the environment, and the Refractor that reflects lasers to solve environmental puzzles, round out the gadget package in Up Your Arsenal.

As Ratchet moves through levels, he can use either his standard melee weapon, a large wrench, or he can utilize a wide repertoire of high-powered weaponry, most of which is earned by buying them from vending stations placed throughout levels in the game with the Bolts (the currency of the Ratchet & Clank series) found from broken boxes and defeated enemies.

Like Going Commando, through consistent use of a given weapon (and that weapon's shots must hit an enemy), guns and weapons gain experience, leveling up to grow stronger. Weapons can be leveled up initially up to four times, resulting in a version five of a given weapon. The Ratchet & Clank series is known for its wide array of clever and fun-to-use weapons, and Up Your Arsenal certainly is no different. Blasters, missile launchers, plasma whips, sniper rifles, laser shields, acid-spewing guns that infect enemies and confuse them into attacking their own side, and so much more are available for Ratchet to use throughout the game. As weapons level up, something like the portable death machines known as the Agents of Doom, that fight beside Ratchet in battle, in their fifth level, turn from four marching robots that fire weak lasers into hovering death bots, launching missiles at foes.

When the initial game is beaten and the final boss has been made to eat Ratchet's dust, a new Challenge mode is available for players. Here, weapons that have been fully leveled up in the original campaign can have stronger version purchased from a Gadgetron vendor. These can then be leveled up a couple of more levels, becoming totally powerful in combat. In addition to that, a new bolt multiplier is available, increasing as Ratchet defeats enemies without taking damage, up to a 20 time bolt multiplier.

Bonus content in the form of well-hidden Titanium Bolts, which can be used to buy character skins such as a tuxedo-wearing Ratchet, a ninja-guised lombax, or even a frosty snowman, is here. Additionally, the series' usual skill points return. There are 30 in all, and these are essentially special tasks to do in levels that you wouldn't normally think of doing, such as shooting down innocent flying Pteradactyl on one planet, or defeating a boss with only Ratchet's wrench. These unlock fun cheats like a big head mode or mirroring the levels of the game completely.

Ratchet & Clank: Up Your Arsenal doesn't shake up the established formula of the series too much, but instead it further refines it. Ratchet controls as tightly as ever, new weapons add new strategies to battle, the platforming is more finely honed, and additionally gameplay like Galactic Ranger missions, Qwark side-scrolling levels, and Clank solo sections add some variety. Some might not care for the more action-focused gameplay when compared to the previous two Ratchet & Clank games, but all in all, Up Your Arsenal delivers good variety, a great villain, and the same gameplay that makes so many of us return to the Ratchet & Clank series time and time again.
Review Page Hits: 2 today (354 total)
mediahook