The first "Western/Clint Eastwood" style game for the PS2. It introduces some new, very interesting gameplay, with a rather entertaining multiplayer mode to boot. 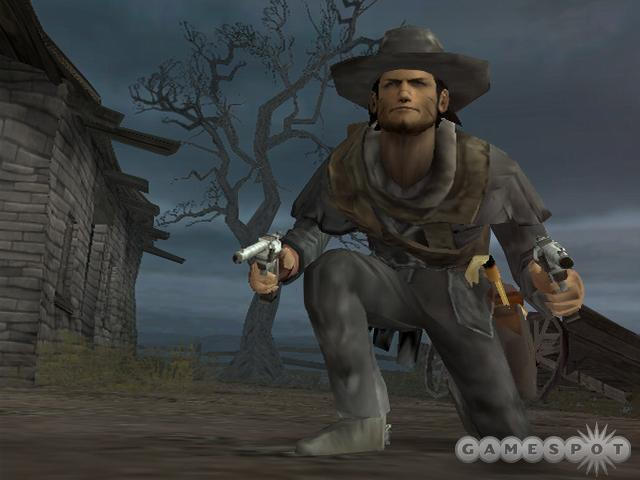 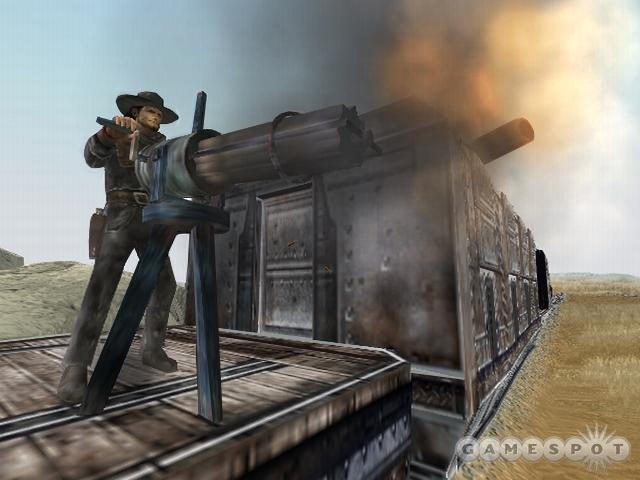 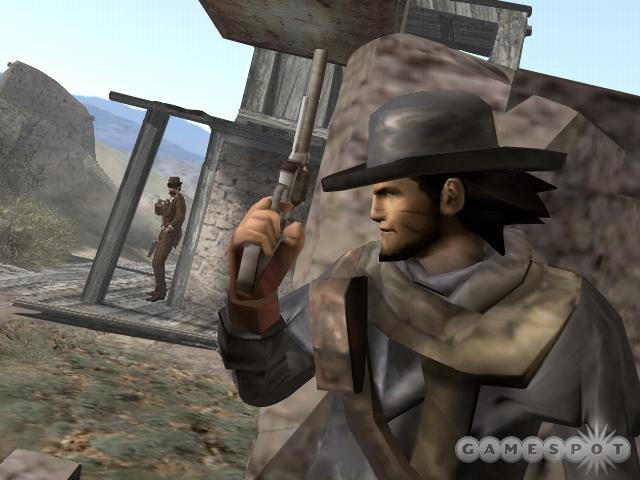 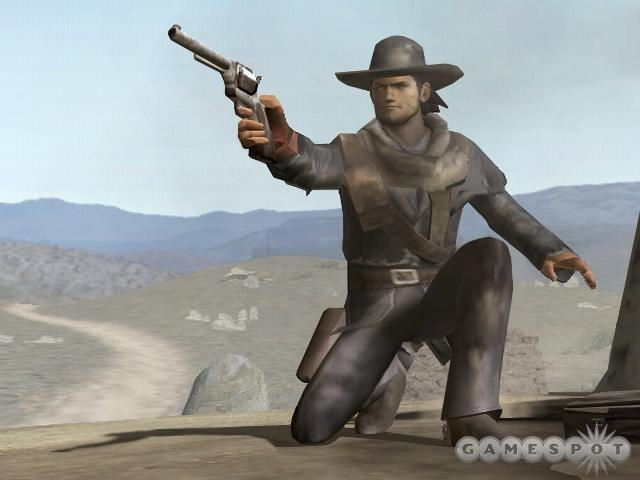 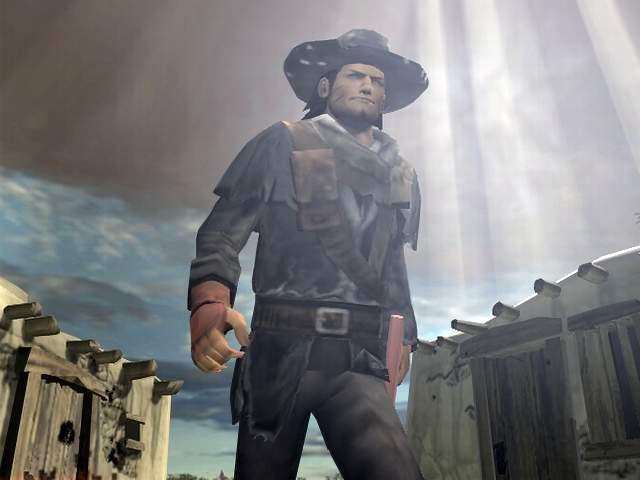 Red Dead Revolver (RDR) is a very interesting, very enjoyable, and at times a very annoying game that Rockstar proudly chucked at us and told us to "think fast". To start with, RDR is quite an interesting twist from the usuall genre that most of us are used to. I guess this game belongs in the Action/Shooting categeory along with the rest of our finely built "mindless" games. I use that term loosly because RDR is a different version of your classic "shoot-em-up" game that involves times where actual thought and brain activity is required. Don't get me wrong, this is mostly your classic "run-and-shoot-anything-that-moves" game, but Rockstar desided to pull a fast one and added various things which make you have to think and react quickly. It is also the first (or so I belive) western/cowboy style game for the Playstation 2.

Story:
The story is one of your typical western revenge themes, which is unoriginal to say the least, but inquisitive none the less. You've heard it all before, cute family, boy loves his father and wants to be like him, father gets killed, boy tries to avenge his father but gets his ass whooped, screen fades dramaticly on a slowely moving close up of boy, boy grows up, you begin as grown up boy lookin for revenge! The story just gave me an incredible sense of deja vu, but after a couple asprin it becomes quite fun. Although fairly short, there are quite a few missions that will keep you on your toes, enough to the point that you just might die sometimes! *Gasp* But in all honesty, the story and missions are fairly stright forward, and even fun at times. The main thing that takes away from the fun is the irritatingly mindless A.I.

Graphics:
The graphics are average, as compaired to the hundreds of games out there. Keep in mind that this is Rockstar that we're dealing with here, and they have been known to be "graphicly challenged" in most of there video games. The first thing you will notice is that Rockstars infamous "claw hands" are back with a vengence. Also, if you have played GTA: Vice City before, the main character in RDR (Red is his name...didn't see that one coming did ya?) will give you this incredible deja vu feeling again with the main character in Vice City (Tommy V.), mixed with an overwhelming feeling that you are living in a Clint Eastwood movie. Aside from all of that, the graphics were still average, and yes that did include the FMV's as well. Although the in-game sky is very pretty at times, and the insides of shopping stores are very well done. I still have to wonder if Clint Eastwood is getting any money for this game...

Sound:
The sound...geez...thats another issue altogether. Rockstar apparently has a terminal fear of letting the main character in any of their games talk very much. Maybe its just a contagious sickness in videogames that makes them lose their voice. I mean, look at the recent games Rockstar has made: GTA3 which the main character dosen't even have a name, let alone talk. Then there is GTA: Vice City, where you finaly get a name, and a voice, and it makes you feel overconfident enough to take on an entire army with a pistol. Then, after they were doing so well with GTA:VC, (I dunno about manhunt cause I didn't play it yet) they go back and shoot themselves in the foot with this game. If they're following a pattern, this game should have come out after GTA3, and before GTA:VC. Red, the main character in RDR, looks and acts like a mix between Clint Eastwood and Tommy Vercitti, and yet he hardly says anything at all, let alone not having any cool lines or phrases. Rockstar must be afraid that their main characters will look bad when they talk, so they just have them shut up and have everyone else talk and talk. Aside from the voice acting, everything else was definitely top notch. The sounds of the wilderness were exquisite, and the coyote howls were errie and really made a nice touch. Even when you had to run into another building, you could still hear the battle going on outside with your partner getting his ass shot at by fifty men and on turrent gun. The only thing bad with the sound were the voiceovers with your character. The other characters voiceovers were done rather nicely, which makes your character look even more sad. From the horse hoof sounds, to the gunfire being right on, to the animals freakin out in the wild, to the girls screaming like little panzies in the middle of a bar fight, the sounds in the game are terrific. Compared to the gameplay, the sound definitetly makes up for the other weaknesses of the game.

Gameplay:
Before I rant, I will say that Rockstar did a good thing in adding a couple of different variaty of characters for you to play as. You also get to play as Jack, the English lone gunner, as well as some girl that has a big rifle (I forget her name

) and an indian named Lone Wolf who has a fancy for a bow and arrow (Bow vs. Gun...gee that sounds fair). You also get to "hijack" a turrent gun and go mental on the bad guys with a river of bullets. Plus, you also get to hop on and ride a horse, a bull, or a buffalo. Also, you get to take part in a bar brawl and beat the crap out of guys while trying to protect three scantly clad bar girls (western times must have been so fun

). Aside from the fun variety that this game gives you, you will find yourself cursing and even buying another controller because you will break yours on the TV at this game. For Rockstar, its good, and exceptable, yet still gives you yet even more deja vu of playing GTA3 and having cops run after you, straight into oncoming traffic, only to have it be your fault that they killed their own dumb selves. I don't know, maybe I am being too critical about it, but in a western game, the whole idea is to duck behind something and have fun leaning out and blasting anything that moves. Yet, apparently someone has failed to inform the computer A.I. this, so you will find yourself many a time hiding against a wall, next to a window, engaged in a firefight with a guy in the building across the street, only to have about 3-4 enemys deside to play hero and rush into your building and just stand there in front of you and shoot you. This isn't just a "hero" act either, it is also a stupidity act. You're standing against a wall at a corner, shooting at some guys down the street behind pillars, and apparently a couple of them feel the urge to run around in circles in the street like ninnies, under a rain of bullets from both you and their friends. Eventualy, they find the way through their "invisible maze" and brainlessly run torward you like a lost puppy, at which point they stand there, inches from you, shooting you until you feel the need to end their poor exsistence. Aside from that, most of the goons apparently have balls of steel and can stand there in a hail of bullets to there body, and come out of it completely unscathed. Only a headshot is a one hit kill to a hired goon, and it will take you about 4-6 bullets to the eyes and brains of any boss to bring them down. For some reason, two headshots to you and you're down for the count...for shame. But this is a Rockstar western shooter, not Rainbow Six, so we can't be expecting any mircles here.

Replay:
The replay value of this game is surprisingly good, compared to the gameplay value of the single player game itself. The multiplayer is the onlything saving this game from the discount bin. You and your buddies will get togeather with a couple of beers (or fruit punch, depending on the age group

) and have hours of fun in classic, old school high noon showdowns. You can play through the single player game again on different difficulity levels and unlock many different multiplayer things depending on how fast you complete each mission. You can unlock a nice selection of multiplayer stages, as well as an impresive collection of characters to choose and play as in multiplayer mode. Plus, you can also unlock upgrades for your character in single player mode, and unlock journal entries that will let you access a butt load of information on different characters, weapons, places, things and pretty much everything else. There are two different things you can unlock per mission: one for getting a "Great" rating (which you pretty much get every time, no matter how poorly you did on the mission), and another for getting a "Excellent" rating (you have to be fast, accurate and, well you get the idea). There are about thirty or so missions (I never bothered to count) so that leads up to a nice amount of unlockables for you to get your grubby little hands on! Fun fun!

To rent, or to buy...that, is the question:
I would have to say rent for this one. Unless you have a bunch of friends that you love to play multiplayer games with, or you've got a western fetish, then by all means buy. However, if you're just looking for something to waste five days of your time (or less depending on your level of insomnia), then this will be yet another rental to add to your "To Get" list.

That's my little (or not so little) review on Red Dead Revolver. I hope you enjoyed it and found it usefull in making a desision about this game. I found this game to be fun and entertaining (although extrememly annoying at times), and deffinetly worth a rent to keep my ADHD fingers at bay for five days. If you have any additional questions that I didn't answer in my little review, then feel free to e-mail me about them. You can find my contact info on my page. So untill then, enjoy the game, and keep asking yourself, "Why wasn't Clint Eastwood voice overing for this!" There were plenty of moments were a phrase like, "I know what your thinking, did he use 5 bullets, or 6? Well you got to ask your self one question...do you feel lucky? Well do ya...Punk." would have been just perfect.