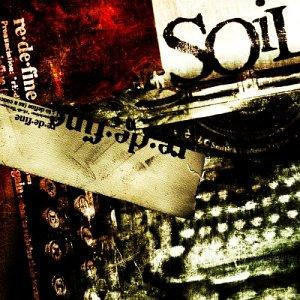 Myself, being a big Soil fan, who loved and still enjoys his "Scars" album, anticipated this CD like a kid on Christmas. I thought for sure that they couldn't manage to mess this one up and that, judging by this album's aptly named title "Redefine", they would've made a somewhat superior album to Scars, right? Wrong. When I first listened to the CD, I actually liked what I heard. I liked the intense opening track "Pride", and the song "Redefine", but it ended up disappointing me. Gone are the catchy riffs that ran rampant in "Scars". Ryan McComb hasn't lost his touch, but it seems like the guitars are ridiculously weak in this album. The drumming is as pounding as ever, but the guitars are so boring in this album. It's mainly just repeated power chords rather than the decent transitions from "Scars".

Honestly, I can say that after listening to the entire CD, the only thing that really stuck with me are the catchy lyrics in "Can You Heal Me?" It's a shame, because this band really has potential. From "Scars", I could hum to you practically any of the songs rhythms, but since the rhythms in these songs are so plain and generic, I couldn't hum a single one for you, even though I've listened to this CD many times already. In "Scars", you really felt the pain of the vocals, the lyrics had such emotion and meaning. In this album, they're just "meh, what's next?"

"Tell Me Something I Don't Know"

Another thing I noticed while listening to this CD, is that it seems so experimental. You'll notice that there are some uninspired solos on this album, something the first album lacked. Solos weren't needed in "Scars" mainly because the rhythm section was so strong. In songs such as "Suffering", you'll notice some wah rhythm, made really famous by bands such as Godsmack and Drowning Pool. While I like the effect, and sometimes use it when I'm playing guitar myself, it really doesn't fit in. It's like wearing shorts and a t-shirt in winter. And while Ryan's vocals are still strong, the lyrics themselves are fairly predictable and repetitive. You don't see too many gentle parts on this CD, which is sort of like saying nearly all of the songs are the same. I'm not saying that the lyrics in "Scars" weren't repetitive, but they were so much more powerful and fit in much better with the overall feel of the album.

Now, please don't get me wrong. I don't entirely hate the album, I just feel they haven't quite utilized their true potential. There are a few decent songs on this CD, such as "Something Real", which actually includes some of the best guitar work on this album, which isn't saying much. The drumming is solid throughout this album, however, and kudos to them for not messing that up. This album is mainly filler and stuff you could just toss out. "Cross My Heart, Hope To Die," is an example of just some of the overused and predictable lyrics. If you're looking for originality, this isn't the place to stop.

Probably not. I have mixed feelings on this album. I so wanted to like this, but I just couldn't find myself listening to it much more than I did when I originally first got it. I still listen to "Scars" even after having it for nearly three years. This album just seems extremely uninspired with non of the inspired, lyric driven metal from "Scars". While I most likely will still buy this album, it's not for everyone. Their second album "Scars" really puts this to shame. Here's to hoping they'll return to their roots on their next effort.
Review Page Hits: 0 today (547 total)
mediahook