Take a Walk on the Darkside 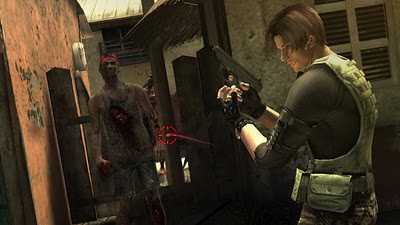 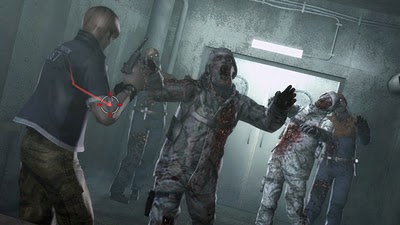 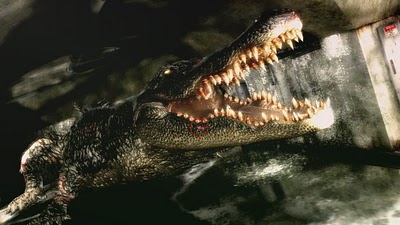 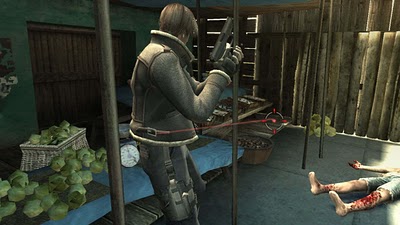 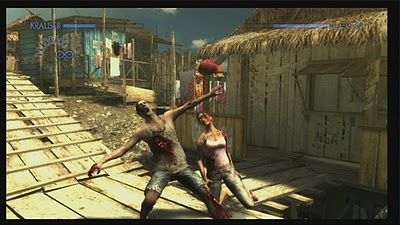 The story of Resident Evil: The Darkside Chronicles starts off with a brand-new, never-before-seen scenario entitled Operation Javier. It stars Resident Evil 2 and 4's Leon Kennedy as a U.S. government agent alongside Jack Krauser on a mission in the remote South American jungle. This scenario is segmented by flashbacks from Resident Evil 2 and Code Veronica. The game does a good job of trimming out the fat of the two games to make a cohesive enough experience that doesn't keep the player in the dark. It becomes pretty clear what's going on in each scenario. Resident Evil 2 follows the G virus outbreak in the mountainside town of Raccoon City and stars Kennedy as well as Claire Redfield, in search of her older brother while Code Veronica takes place on an Umbrella island prison featuring initially Redfield and newcomer Steve Burnside. The cut-scenes are well-presented and look excellent, and the voice work is top-notch, too.

The flow of the game has players taking part in one mission of Operation Javier before entering the Resident Evil 2 flashback of eight missions. Another Operation Javier mission occurs followed by the Code Veronica chapter of the story which is seven missions long. Finally, there's three Javier missions before the final boss encounter. Crack-shot players will have the opportunity to earn secret bonus missions featuring Krauser as well as a throwaway mission involving an attack of killer tofu. Don't ask. Most missions take anywhere from seven to twenty minutes, and you can skip cut-scenes and talking segments at your leisure unlike some other rail-shooters on the console... Cough! Dead Space Extraction.

The Darkside Chronicles is a rail-shooter, meaning that your characters automatically maneuver on a set path. Sometimes you'll get a choice of which path you'd like to take, but mostly, all you do is point and shoot. Of course, there's some strategy in playing the game. Go for a headshot on a zombie or play it safe and shoot their legs from out from under them? Speaking of headshots, they're much easier to perform than Umbrella Chronicles. It still takes skill and good aiming, but it's easier to shoot the forehead of a zombie and not the edge of their crunchy cranium. There's many types of enemies to look for, each with weak points and their own types of attacks. Little aphid bugs and spiders will leap onto you which means it's time to pull out the knife (simply hold A and perform a movement) to swipe them off before they cause too much trouble. There's enemies that will attack you with their long, piercing tongues, zombies that will puke out damaging bile at you that you can suspicious shoot at to dodge it, and giant frogs that you'll want to give them their last croak.

Boss encounters are common in Darkside Chronicles, and they are as epic as the rest of the game is. Each boss has a set attack pattern and a weak spot to hit before they attack in order to make them hit, minimizing any damage you'd otherwise take. The goal is simple in most boss battles: to deplete the enemy's life bar by continuously attacking the weak point or points. However, some fights are scripted, so even if you get the boss' life bar all the way down to empty, the battle still could wage on until a set period of time. This can be quite annoying, but it's not too terribly bad to cope with. Some battles are staged to where you have to defeat them by shooting a specific object such as one battle where you blast the locks of a missile, sending it directly into the boss, destroying it.

At the end of each mission, you're awarded a ranking based on how well you performed. You're ranked by overall score, time allotted, enemies defeated, headshots obtained, whether or not you used a continue, and whether or not you took damage. Besides using a continue or taking damage, each stat is given a rank with the overall rank being tallied up: grade C through S. Thankfully, the game saves your high scores in each attribute, so if you get an S under the time score, you'll keep that rank through subsequent runs through the same mission. This ranking system encourages multiple run-throughs of levels, and they're not just for show, too. Earning S ranks unlock new costumes for the crew including Leon's Resident Evil 4 digs complete with styling jacket.

You also earn gold for completing missions as well as shooting out lights and other objects in the game. This currency can be used to customize your various weaponry for better strength and efficiency. There's plenty of firepower to use in Darkside Chronicles, and four at a time can be mapped to the d-pad or analog stick. There are infinite ammo handguns, shotguns, machine guns, bowguns, grenades and launchers, magnums, and more. You can spend gold boosting the power of your weapon, rate of fire, reload speed, capacity, and stopping power which is the power to stop a pursuing enemy in their tracks.

Playing Darkside Chronicles is quite easy. You can play with the Wii remote solo or utilize the nunchuk in conjunction with the remote. I prefer the latter as you can reload without taking the cursor off the screen. There's no way to turn off the cursor, unfortunately, but it's not really in the way to begin with. You can switch weapons on the fly with the d-pad or analog stick, and heal yourself immediately with an herb by pressing the plus button. For cases when you need your knife, you can hold down the A or Z button and swing the Wii remote to slash anyone or anything (mostly anything) that gets in your way. Sometimes you'll need to shake the Wii remote when a zombie has you in their clutches to break free. There's also context-sensitive moments (mainly in boss fights) that require a button press (never a Wii remote motion thankfully).

There's a lot to tide players over for the fifty dollar price tag. Some would say fifty dollars is too much for a rail-shooter, but this one is truly packed with content. There's five difficulty levels, multiple costumes and modes to unlock, secret archives to collect from character and enemy bios to titles awarded for performing certain in-game tasks, as well as multi-player for up to two players, and online leaderboards. This rail-shooter is jam-packed with things to do and zombies to shoot.

Darkside Chronicles has some of the best presentation for a game in its genre. The voice acting, while lines are occasionally corny, is very good. You get the feeling that these characters are scared for their lives. The music is tense at times, and loud and blaring others. It's a great soundtrack with remixed Resident Evil songs for fans of the series to pick up on. The visuals are some of the Wii's best. The models are detailed, the areas have plenty of objects to shoot and destroy, and the lighting effects are particularly good. There's a mission where you're in a sewer, pitch-black, and all you have is your flashlight to shine the way. It's absolutely impressive. The only annoyance that some players might be bothered by is the frequent movement of the camera during gameplay. It makes aiming an intermittent headache, especially when trying to stop a boss' attack.

Resident Evil: The Darkside Chronicles may just be the best rail-gun, light-gun, on-rails shooter - whatever you call it - period. There's enough content to justify the full retail price tag and last thirty or more hours with zombies to blast, titles to earn, bonuses to unlock, and guns to upgrade. Even as a casual fan of the Resident Evil franchise or an entire newcomer, there's enough to wrap your brains around and enjoy. Just watch out for those hungry zombies!
Review Page Hits: 1 today (211 total)
mediahook