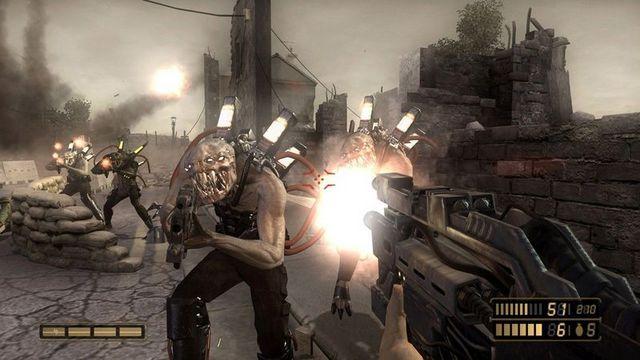 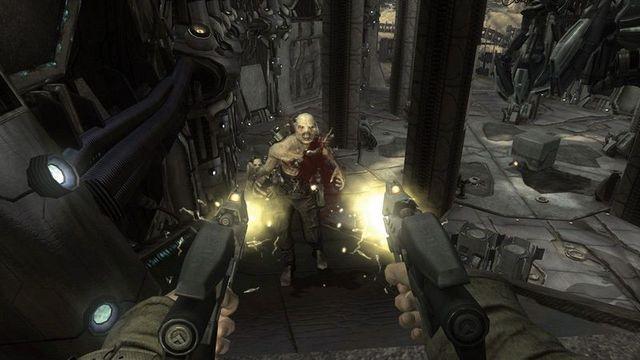 The PS3 didn't have as many original launch titles as we all might have hoped but they did put forth a pretty unique FPS. Resistance: Fall of Man supposedly takes place around the end of the 1940's and consists of a quickly spreading plague of mutated humans. At first it seems that the Russians had a power biological weapon but in reality it was a swarming mass of mutations conquering the earth. You start as a soldier who is part of a wave of Americans sent to help the British fight off this mass. As you play longer and longer more and more story begins to unfold. Apparently your character is a lone survivor of the war (the war you are actually fighting and this entire game is an after thought) and he is immune to the chimera infection.

When you pop in Resistance you will notice that it doesn't look that bad but on the same note you are not really wowed with anything either. Then as you play a little more deeply you will notice that some of the textures are really off. Overlapping, abrupt ending of wall textures, etc. will all rear their ugly heads! However, this isn't a major turn off in the game because there are other visual elements that help balance out these shortcomings. One interesting thing I came across are the glass effects. When you shoot a window or other form of glass it doesn't simply break out or crack but single pieces around the impact zone will break apart. Sometimes the bullet passes through the glass only leaving a bullet hole with cracks around it but when shot repeatedly you will notice that the breaking of the glass is quite realistic. You can tell that the developers took their time with detail on this title. I was shocked to see the difference that resolution played on this game. I was originally playing it in 480p until I realized my mistake and turned it up to 720p (the max this game supports). It really helped the visuals.

Even with the great glass effects and some pretty attractive explosions the graphics don't warrant a dance, an OMG, or even a double-take. It felt oddly familiar, like I have played or seen something like it before. The concept was original and I really enjoyed listening to the story but overall it seemed second hand. The graphics didn't live up to the hype I read about or expected at all. Since I have an HDTV they can't use that "Oh, you need HiDef to really see the graphics" CRAP.

Playing the game is not that big of a challenge (especially on lower difficulties) and it can be run through really quickly. Throw a friend in there and you can double-time it through the levels like a professional linebacker through a pee-wee football defense. Playing alone I was able to sprint through the title in well under 10 hours (about 7 or 8 hours tops). Aside from the easy levels you do get a wide array of weapons and even some vehicles. It really helps that after the campaign is conquered unlockables are rewarded in the form of weapons and such to coax you into playing the campaign for a second time.

I really enjoyed the campaign for a while but towards the middle I became a little distracted with its ease. I also found the chimera characters to look a little odd...as if the character models were a little out of place. They look a little oversized and clunky and sometimes they look completely out of place in the game. Not only that, but their AI isn't getting them any 1300's on the SAT. Even though the Chimeras are pretty dumb its nothing compared to the way they portray your men. The first level is NOTHING but your own men dying. They run five feet and explode. I couldn't believe it was so cheesy.

Sound is something that kind of gets swept under the carpet in this game. The soundtrack isn't something you remember . Explosions are recognizable and the gun sounds are done really well. I was actually really happy with the woman they chose to do the story during cut scenes. She really made the scenes pop. Other soldiers, however, become annoying and a little repetitive. I was tired of them talking to only find out they die four seconds later.

One of the highlights of Resistance: Fall of Man is the online multiplayer and co-op modes. Co-op lets you run through the levels with a friend which only makes them easier in my opinion (especially when you can revive fallen teammates). Online play is actually really good. Up to 40 players at once! It does so pretty smoothly as well and that is due to dedicated servers. Your variety of online play is a little limited but each game could mean a variation from fast-paced, nonstop shooting to slow methodical sniper battles. It is completely dependent upon the set-up of the levels. Not only that, but the points system in place for the score is actually quite accurate and responsive. You get points for kills, assists, etc. and it does a fine job of factoring all those in accordingly. I was amazed when I was able to join a room of 30 people and then watch it fill up to 40 without lag! A lack of voice chat was really sickening but I soon found myself not needing it.

Resistance: Fall of Man is a decent title but will not be one remembered for anything groundbreaking. It's kind of like that son in a large family that gets a job at Denny's while the others go to college. It has good graphics but nothing unworldly, decent sound, entertaining gameplay, and pretty damn good online play. Overall I would recommend buying it and playing it till something else came out but don't look to be sticking with this title for multiple years. It was a valiant effort at launch but just fell a little short of greatness. Just because you have an original idea doesn't give you the right to rip-off the rest of the game. Story and gameplay must both be original!
Review Page Hits: 0 today (707 total)
mediahook