Livin' on Rock and Roll Music 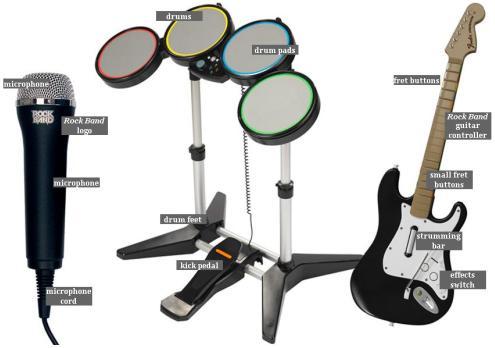 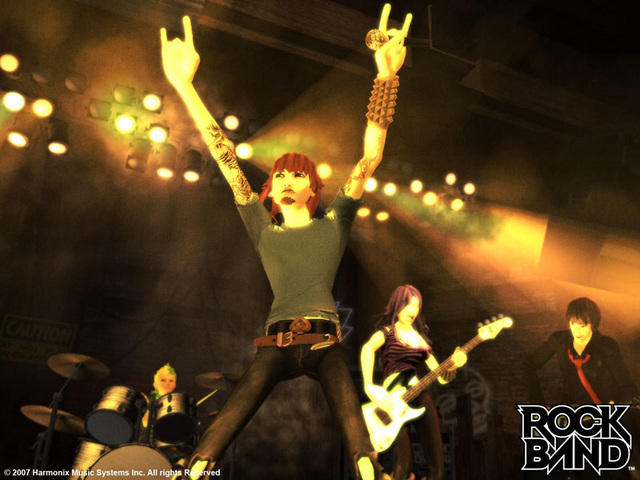 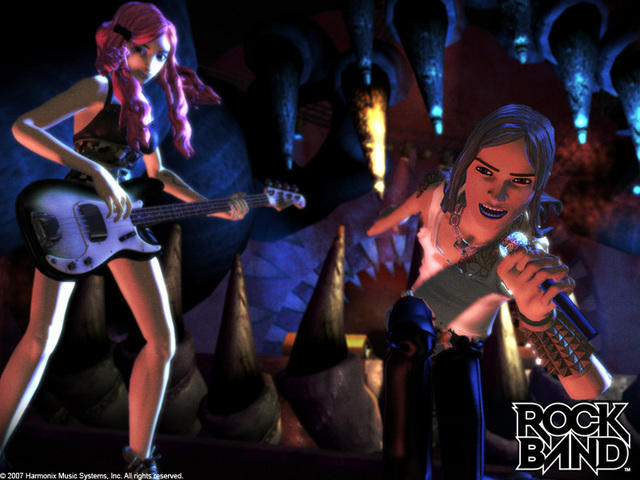 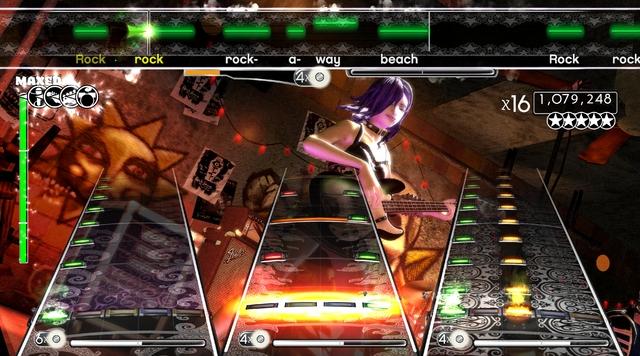 Being a fan of Guitar Hero, I figured from the moment I heard about Rock Band that I'd want to try it at some point. The price tag was a bit intimidating, though. It wasn't until late March that I thought to myself, "I've got a guitar controller and a headset mic. I should at least check out the song list. I mean, they've got Learn To Fly on there!" So I hit up my Gamefly account to have a rental copy shipped to me. I spent some solo time with the game and, satisfied with the experience, tried to talk my roommates into sharing the $169.99 cost of the retail bundle. "200 bucks is too much for one game," they said. "We'll end up playing it for a week and then it will just collect dust." Two months later, our instruments haven't had a chance to cool off, let alone collect dust. Time flies when you're having fun.

If you aren't aware of the music game phenomenon that is Guitar Hero, the concept of Rock Band may be a little alien to you. The game uses custom controllers designed after musical instruments. Two guitars (lead and bass), a drum set (new to Rock Band) and a microphone allow four players to play out their respective parts in a band. The singing plays pretty much as you'd expect, acting somewhat like a karaoke game. The other instruments have colored buttons (frets for guitar, pads for drums) that are hit in unison with notes moving on the screen while a music track plays in the background. As long as each player hits the notes accurately, the music plays flawlessly. Mistakes made while following the on-screen notes are represented by the absence of that respective part from the soundtrack. The game rates your performance with a score.

Now that everybody's up to speed, let me address the other 99% of the world: Rock Band borrows liberally from Guitar Hero.* The guitar parts are played the same way, both games have special energy gathered during songs to boost performance scores (Star Power in Guitar Hero, Overdrive in Rock Band), both use the same angled vertical scrolling for notes, but that's where the similarities end. The addition of other instruments is less a cheap gimmick and more an evolution of the genre. The 4-player Band World Tour mode is satisfying in way that are difficult to identify. Four players create a band (creating their name and logo, as well) and tour the cities of the world building on their fame and gathering fans. It's worth noting the social element of playing Rock Band. A lot of real musicians (including the developers themselves) have commented on the shocking social parallels between playing Rock Band and playing in a real band. We would find ourselves offering encouragement to the guitarist during a particularly difficult solo, congratulating each other after a good set, or criticizing each other if thing go poorly. An excellent example is the advancement through difficulties. When your band gains enough fans, it's necessary for all of your band members to advance to the next difficulty level. Otherwise, no more fans are gathered. Anyone in the room could feel the very real frustration when more skilled players were held back by lesser hangers-on. Such was our devotion to making our band the best it could be.

Rock Band has also received criticism from real musicians, mostly accusations that playing an instrument on your console doesn't compare to really playing the instruments. Well, it doesn't. Especially on the lower difficulties. On Expert, you're basically hitting the songs note for note, but only on Expert. It is a game, after all, and having fun is more important than a spot-on music simulation. And, oh, it is fun. I've seen people with no interest in the music game genre fall in love with Rock Band. Hated Dance Dance Revolution, hated Guitar Hero, can't get enough of Rock Band. And the multi-player component is a big factor in that.

Sadly, the single player experience on Rock Band isn't quite as polished. It could be compared to Guitar Hero, in that you move through increasingly large venues playing increasingly difficult songs until you reach the end. It lacks the cinematics and presentation of Guitar Hero, though, and isn't nearly as satisfying as World Tour mode. Even more upsetting is the lack of any World Tour perks. Playing alone means no fans, no custom setlists. Just play the songs you're given. It works for what it is, but it doesn't even compare to multi-player and could have used a lot more work. But Rock Band wasn't made for solo careers. It's all about the group dynamic.

And the songs. 58 songs come on the disc, in genres ranging from 1970's punk (The Ramones) to modern alternative metal (Faith No More). Worth noting is the downloadable songs. Like iTunes, players can buy new tracks online to add to their personal playlist. Songs are rated by difficulty for each instrument and again cover a large selection of genres. Songs can be downloaded individually or in Track Packs of 3-4 songs. Rock Band has been offering downloadable content since immediately after launch, but recently we've seen the addition of Albums. Starting with Judas Priest's Screaming For Vengeance, Harmonix is offering 9-song packs for 1200 Microsoft Points ($15). All of this just serves to add more variety to an already impressive soundtrack.

The question remains "Was Rock Band worth the $200 price of admission?" Personally, I'd have to say "Depends". If you've ever dreamed of being a rocker, but have always lacked the talent, exposure, or sheer force of will, get this game. If you like singing, drumming, or playing the guitar, get this game. If you enjoyed Guitar Hero, definitely get this game. Downloadable content and the inevitable release of Rock Band 2 means your investment won't be collecting dust any time soon.