Secret of Mana (or Seiken Densetsu 2, as it is known in Japan) is a fascinating RPG with a nearly unmatched real-time battle system, beautiful graphics, and an amazing soundtrack. 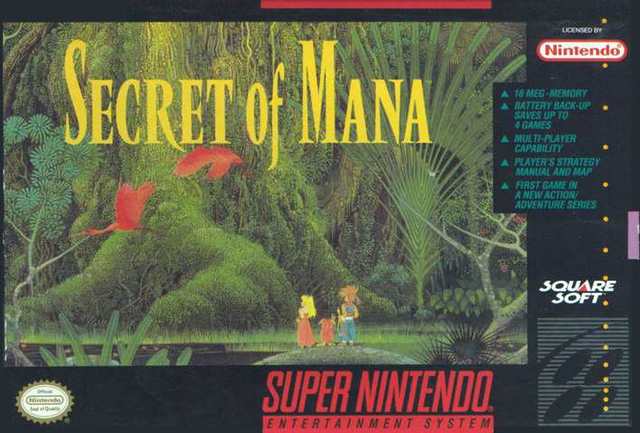 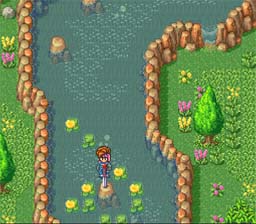 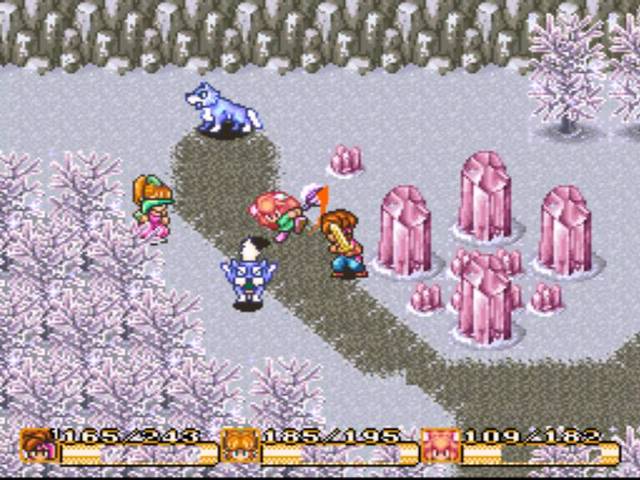 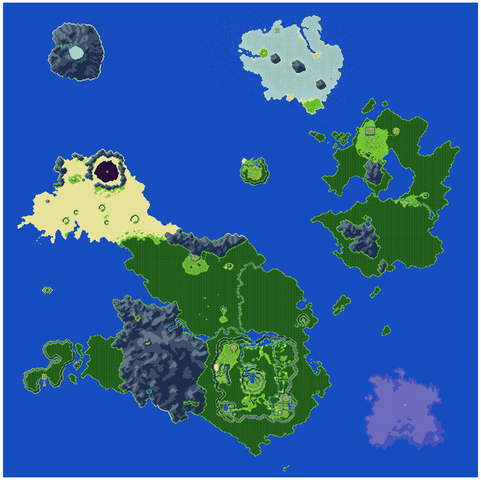 After all these years, Secret of Mana still stands out as one of the greatest games ever made. It has a unique charm to it that in my opinion, no other game has ever matched. Plus, it's real-time battle system was revolutionary for it's time and still holds up today..

You play as a young orphan who stumbles upon a strange sword just outside his village. Upon removing it from the rock it was stuck in, he sets off a chain of events that he never expected. The sword was the Sword of Mana, placed there to protect the village. Mana protects the world they live in, but there are those who wish to disrupt the balance of Mana and use it to gain power and destroy the world as they know it. The young boy must travel the world and find the eight palaces, home to the eight Mana seeds, and form a seal between them and the sword to stop this from happening. Along the way, he finds help from a spoiled princess and a young dwarf.

The gameplay is excellent, whether you're playing by yourself or with a friend. You face tons of unique enemies that all require different strategies to defeat. There are several weapons at your disposal and a wealth of magic spells to use. The combat system is where this game really shines, using a real-time battle system as opposed to the turn-based battles that most RPGs of the era relied on. The only thing that could have made combat better is if the magic was selected in real-time as well, instead of in the menus.

The world is fairly large and has many different, interesting areas for you to travel to. One thing that has always stood out to me in this game is how interesting and immersive each new area is. Every time you travel to a new area to begin the next chapter of your quest, it feels so exciting and fresh, even when replaying the game!

One thing I really like about this game is how many villians there are. Most games just have a few, and while there is one MAIN villain in Secret of Mana, he has several henchmen who you encounter frequently, and other villains who aren't affiliated with the main villain but still stand in your way.

The graphics in Secret of Mana are beautiful, definitely some of the best for the SNES. The excellent graphics really contribute to the appeal of each new area. You find yourself in one beautiful landscape after another. The enemies, and bosses especially, all look great. They did re-use a lot of the enemy sprites though, just with different colors. Most would probably consider this a negative, but I've actually always liked when games did this. It's really cool to progress through the game and start facing stronger versions of enemies you've fought in the past. It brings back memories of where you've been and reminds you that you're getting further and things are getting more serious/difficult.

Secret of Mana has one of the best soundtracks OF ALL TIME. It's hard to describe the music of this game, you just have to listen to it. It ranges from happy/up-beat tunes that put you in a good mood, to slow/emotional songs that bring a tear to your eye, to intense/hardcore music that makes dungeons more exciting, and finally, to downright creepy music that make some of the scary areas in this game even more frightening. The music always goes along perfectly with what's happening in the game and the area you're in.

I suppose replay value means different things to different people. To me, if a game is great, I consider it very replayable. Beyond that, though, there are some other things that make this game replayable. First and foremost, you can play by yourself or with up to two friends. Playing by yourself or with a friend can make for totally different experiences, and are worth separate plays for each. The number of weapons can add to the replay value. It's likely that you'll use the same weapon most of the time, so you could mix it up by making another weapon your primary. Also, you could try playing as the girl or the sprite, instead of the most likely choice of playing as the boy. Then, there's the (very time-consuming) challenge of trying to get a 100% save file, which requires getting each character to level 99, all eight weapons to 8:99 for each character, all seven elementals to 8:99 for the girl and sprite, and all of the rare item drops. It's hard to explain briefly, but this requires more than just a lot of time, you have to carefully plan how you go about it, because once you get past a certain level, you'll no longer be able to get your weapons all the way to 8:99.

There's not a lot to say here, because the controls work great. Movement with the d-pad is never a problem. Attacking is always quick and responsive. The ring menu was a great idea and works very well.

Overall I give this game an A+. It's easily in my top three games of all time, and on some days I'd list it all the way up at #1. While most games lose their appeal over time, this game has always managed to maintain the initial thrill it gave me in my childhood. Every time I replay it, the music, graphics, and gameplay all suck me in and it feels like the first time all over again.
Review Page Hits: 0 today (1,095 total)
mediahook