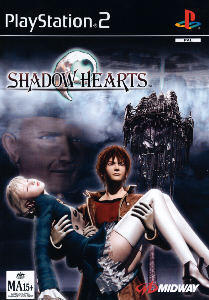 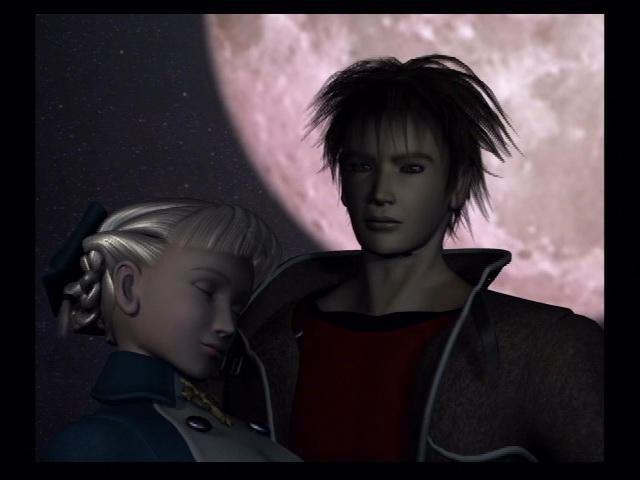 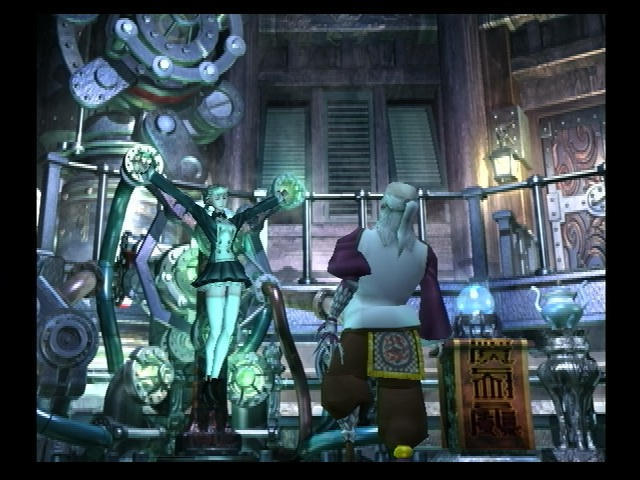 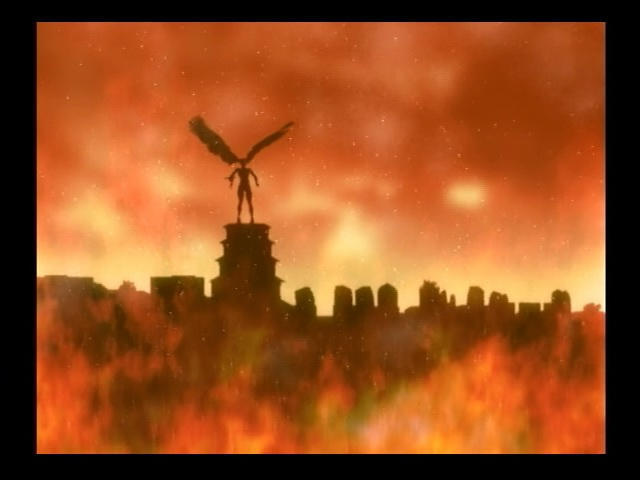 Hmmmm. How to begin. The intro to a review is always the hardest part. So why not start with this:

DAVID SMITH IS A FUDGING MORON

Ahhhhh, much better. Oh, you don't know who David Smith is? Well, that's a good thing that you don't, because there no telling if his idiocy is contagious. But if you want to be a masochist, chew on this:

That review reeks of a lot of things: An amateur writer, someone that didn't play near enough of the game, someone that was caught up in the fanboyitis of Final Fantasy 10, someone that needs a SWIFT AND DECISIVE KICK TO THE JIMMY, whatever. "Even if it feels like Yasunori Mitsuda is taking a bit of a breather here between more serious projects."??? Hey Mr. Smith, perhaps you should quit IGN and look into a career in waste management, because you obviously don't know crap! Just look at the reader scores on IGN, and just about any other site to see what people think of this game. And of course, continue to read this review, to get a glimpse of the wonderful game known as Shadow Hearts

Story: The storyline follows a Yuri Hyuga, a young man who happens to have the talent of "Harmonizing" - a man who has the ability to fuse his soul with the soul of demons. A voice in his head leads him to an encounter with a young woman named Alice Elliott, but Yuri also encounters a man named Roger Bacon who is trying to abduct Alice. Yuri "wins" the initial encounter, and the story gets set in motion from there. The game does a great job of pacing the story and not giving you too much to digest at a time. Additionally, about midway through the game the game slightly changes focus, which prevents the main storyline from becoming redundant or needing a lot of "filler" in between plot points.

There are a LOT of things about the Shadow Hearts story that make it a unique and intriguing experience. The first thing is that the location/time is based in the real world. The game starts in 1913 Asia, and for the most part, it sticks to the general feeling of that time/place. A lot of the locations you visit are real (e.g. Shanghai), which make it a unique story. Of course the mysticism and magic and demons aren't very realistic, but the game does a good job in melding them in with the time-frame and the settings of the game.

Additionally, the game has a very dark tone, more so than just about any RPG I've played. A lot of time time it feels like a survival/horror game. Among the games locations are a cannibal village, a twisted orphanage and a freaky mental hospital. The game does a great job of making these dark themes feel like a natural part of the story progression. You'll rarely feel as though anything is contrived. it's a refreshing change of pace to see a more mature and dark storyline in the midst of all the "cookie cutter" RPGs out for the PS2.

The character development in the game is off the charts. The game does a WONDERFUL job of making the characters unique compared to other RPG games, and distinct from each other. Even the main enemies are given enough time to flesh out their motivations and personalities. The characters are also given ample time to develop relationships with each other; not only the main relationship between Yuri and Alice but all the secondary characters as well. Unlike some other RPGs *coughFINALFANTASYXhack*, by the end of the game you are given many reasons why the characters feel the way they do about each other, instead of "well, that's how the story was written".

The game hits a home run with Yuri, not only his relationship development, but his personal development. For starters, he is not the typical spiky-haired effeminate hero. He starts out as a brash, cocky young man bordering on being a perv (great line: "Hey lady, I can see your..." before being cutoff by the woman in question). He does keep his original personality, but you can see it slowly being refined throughout the game. You also get to watch Yuri deal with his personal demons, and the game makes it an interactive experience. Yuri's subconscious takes form of a graveyard, and you will make many visits there in the game to deal with Yuri's inner demons and conflicts.

You may notice that I have the game Koudelka listed under both pro and con. While Shadow Hearts is not a direct sequel to Koudelka, there are numerous tie-ins as you progress throughout the game. I personally think playing Koudelka first enhances the story a GREAT DEAL, especially the last 6-7 hours or so when the tie-ins start occurring. Although it is not a necessity, I would have to say this story is a "B" if you don't have the background of Koudelka, because some of the main plot points near the end have little emotional impact without having played Koudelka first. regardless, I guarantee this story will NOT disappoint.

Graphics: Overall, this may be the weak link of the game. The graphics aren't bad by any stretch of the imagination, but they are pretty pedestrian. It's very surprising, since the opening FMV/intro is one of the best looking FMV's I've ever seen, and it really gets you into the game right away. The game goes downhill from there. There are a few bright spots. The locations and a lot of the monster designs are unique and creative. Everything else is average. None of the FMVs match up to the introduction. The character models are pretty generic and could have used a lot more detail. The spell effects are nothing spectacular, just functional. The graphics are not bad, they just could have used a lot more attention and polish.

Sound: This soundtrack is PHENOMENAL, easily one of my top 5 soundtracks. If you are a fan of RPG music, you will pleased to know that a fellow by the name YASUNORI MITSUDA worked on this, and the quality shows. This game does as good a job as any I've seen of having an "appropriate" soundtrack. Each song fits perfectly with its theme, setting and situation. The game splits time between Asia and Europe, and the soundtrack changes accordingly. The stronger tracks are those played the most often in the game. This includes the battle themes (for both Europe and Asia) as well as the boss themes. The "Blue Castle" music is also tremendous and one of my favorite tracks in the game. I guess there's a reason I can't find this soundtrack ANYWHERE except for German website that sells it for like 80 bucks

Unfortunately, there's a reason why there's not an A+ in the sound category. And that's because, as good as the soundtrack is, all the other sounds in the game are on the other end of the spectrum. The voices are just plain TERRIBLE. Pretty early in the game you will encounter a story by the Sea lady, and it's as painful of a thing as I ever recall having to listen to (and I've heard people grind lucky charms marshmallows on a chalkboard). Just persevere through that part. The battle sounds and effects are also uninspired. What's really odd is that the battle voices are half Japanese and half English; like they all weren't translated. This can start to be a minor annoyance, for example when I use one of Margarete's skills, and you can her say "I can use some help here" in ENGLISH, then finish the special attack screaming in JAPANESE. What the fudge?

Gameplay And here's where the games shines. The game just has so much depth, and it's in areas where a lot of RPGs lack; which makes you appreciate what this game brings to the table even more. First, the battle system, and many other actions in the game are based on the "Judgment Ring". Basically, after you choose an action for your character, a large circle appears on the screen, with one to three highlighted triangles drawn out from its center. A radius ''sweeps'' clockwise from one end of the circle to the other. For the character to successfully attack (or cast magic, or use an item), the player must ''stop'' the indicator on each of the triangles as it sweeps through the Ring. Hit the triangle and your character succeeds in performing his action. Miss, and you've just forfeited the character's turn. It's kinda hard to explain, and you really have to try for yourself. It's a little more complicated than that, but yet it's easier to grasp and get the hang of in the game. It does require decent reflexes, but at the same time, it is rewarding to actively participate in battles and actions.

Also, remember the graveyard I mentioned earlier? Well, this takes a key role in the game during and after battles. You see, whenever you defeat a monster, that monster harbors malice toward you. All of this malice builds up, and when it reaches a critical mass, Yuri's darkest fears are unleashed, and unfortunately they will kill him. So the solution is to go to the Graveyard and fight monsters in order to quiet the malice for a while and let it build up again. It's a great little touch to a game, the helps flesh out the gameplay as well as add a unique trait to a character.

Additionally, the menu system is well done. There's kind of a FAQ that can answer game questions and give out explanations a million times better than this review can. There are pictures of each item, a description, as well as it's judgment ring (so you can see what ring you will have to successfully complete when using it). A lot of back-story and neat added touches can be found just by surfing through some of the key items you've found. There's also a "score" sheet, that tallies things like battle stats and whatnot, that is a fun little thing to look at once in a while.

Summary I really could go on and on about this game. It may seem at first like this game is an overachiever, but you will soon see that it lives up to the good things you may have heard about it. I happen to put heavy emphasis on story and music, so this game is easily one of my all-time favorites. Even if you don't, this game more than likely has something to offer you, if you give it a chance. I will suggest once more to play Koudelka if at all possible first, but even if you cannot this game holds its own with any RPG out on the PS2. Strongest Recommendation.
Review Page Hits: 0 today (818 total)
mediahook