A Comprehensive and Fairly Easy-To-Understand FAQ for Nocturne. Click NOW!

A morbid, difficult and rewarding Strategy/RPG. One of the Playstation 2's best. Hard as nails though. 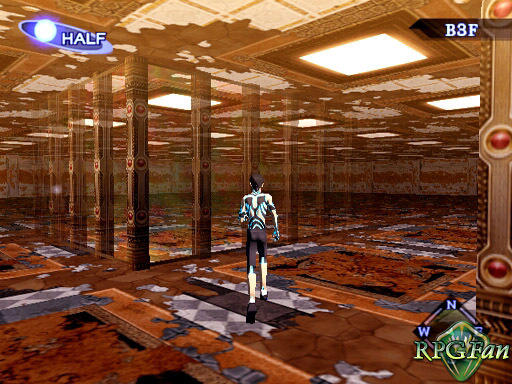 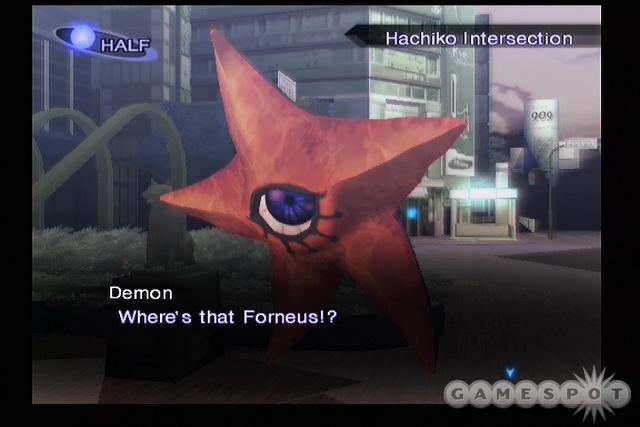 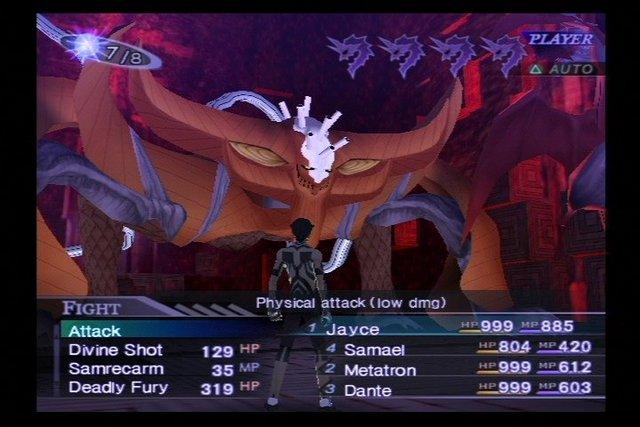 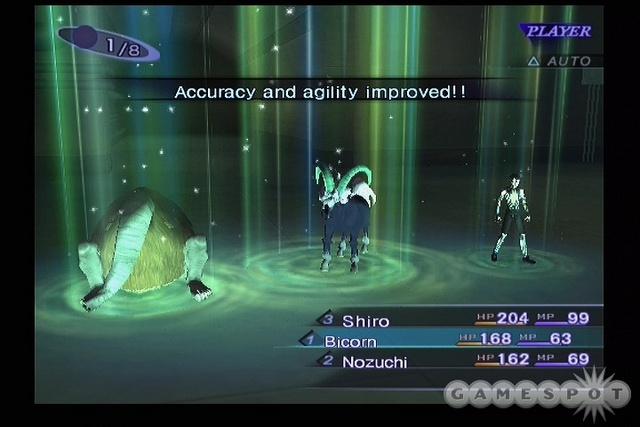 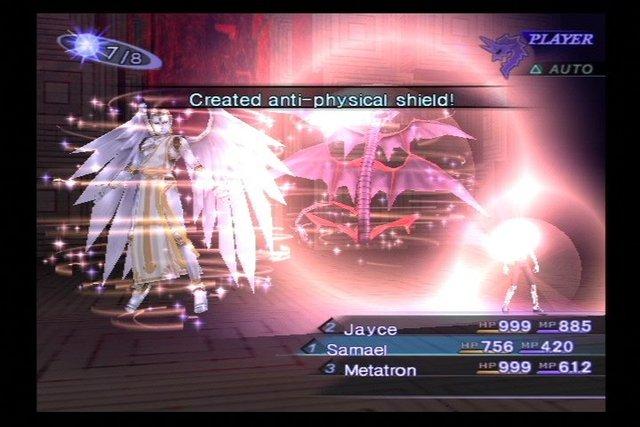 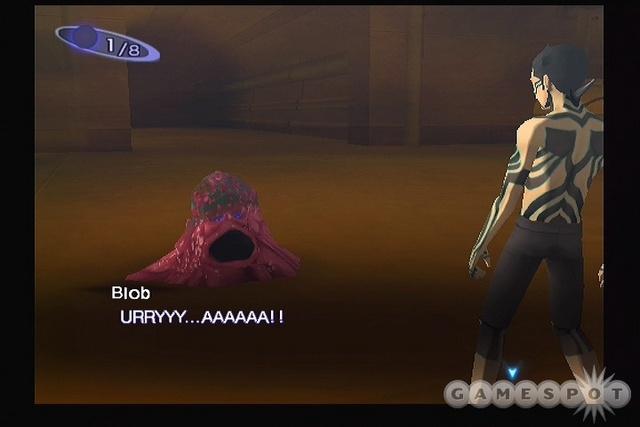 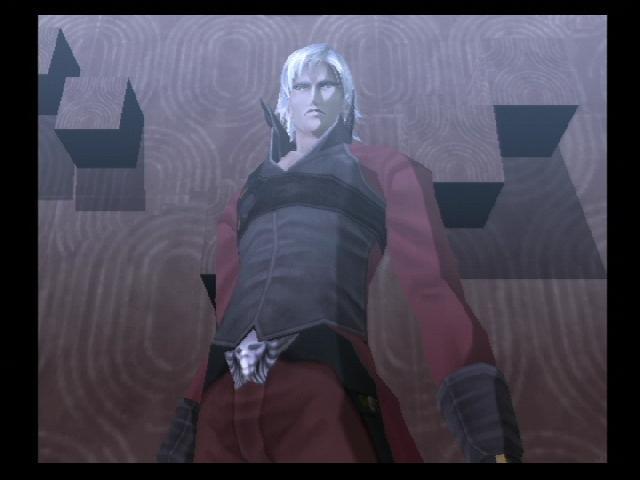 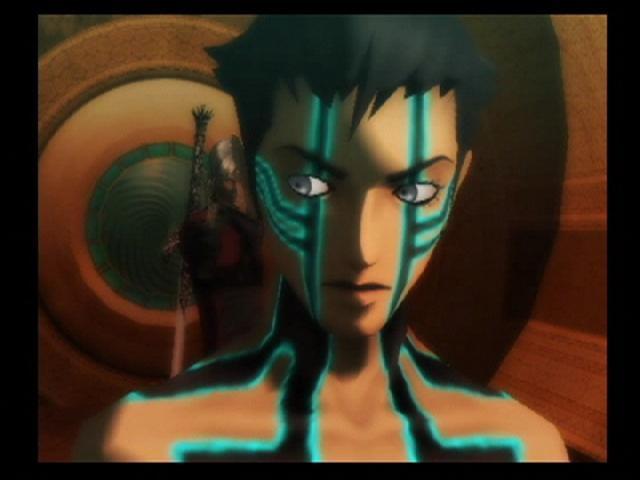 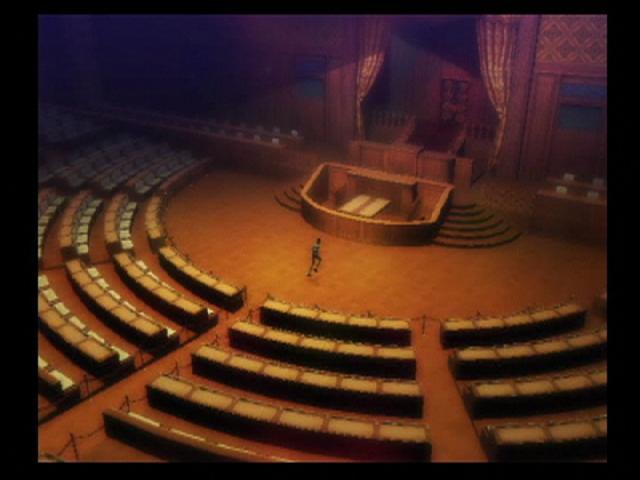 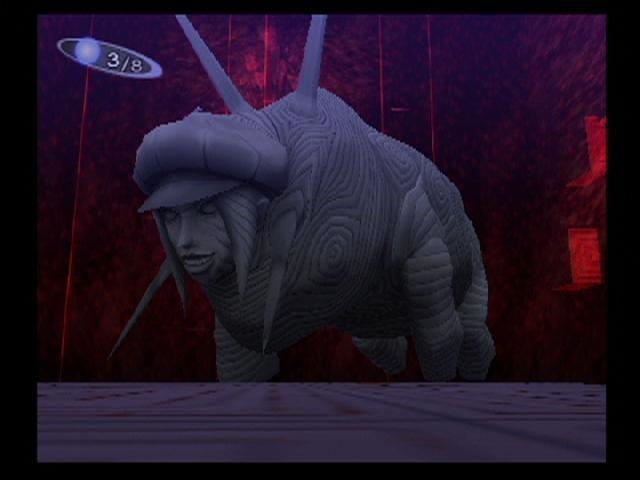 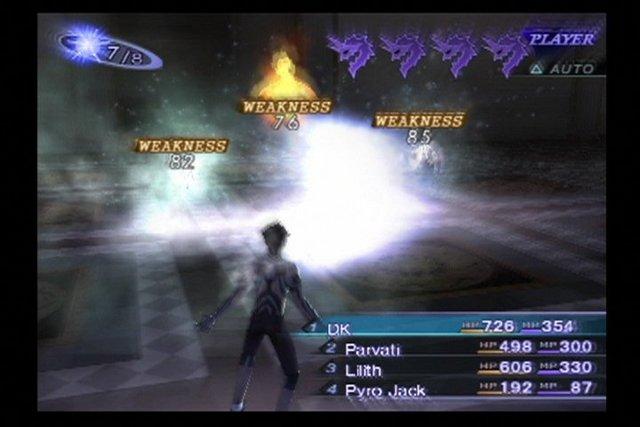 Shin Megami Tensei: Nocturne is one of the most compelling Playstation 2 games I have ever played. I look back on those 60 hours it took to beat Nocturne as some of the best I've spent on my Playstation 2. And it's for a very simple reason.

And that's because this game has that special "something" about it that made Nintendo's beloved series so appealing, the gameplay. Pokemon and Nocturne are so good because it's so much fun "persuading" each games' creatures to fight for you. And of course leveling them up by beating down other creatures. This game is not a Pokemon clone though, because it does everything better than Pokemon in the gameplay department. However, Nocturne is an unforgivingly difficult game, and that is something all but the heartiest gamers will have a hard time overcoming. But there's a reason for the difficulty in Nocturne, and it is worth taking lumps and bruises to the psyche in order to experience this engrossing, marvelous game.

First of all, Nocturne plays differently from Pokemon because it has a traditional console/RPG combat system. Up to four characters (including the main one) fight at the same time, as opposed to Pokemon's mostly one-on-one dueling. Although this is different, both games play similarly because of the importance of creature "alignment" (whether they're fire or water, light or dark-aligned) in combat. It is the bedrock of both games' combat. But what makes Nocturne such a leap every other game like it is also what makes it such a difficult game. That is the supremely harsh consequences of exploiting characters' strengths and weaknesses.

The consequences of attacking an opponent's weakness are extra damage and extra turns. Essentially, the player and the computer's number of turns depends on the number of creatures in combat. If you have the maximum number of characters in your party in battle, you get four turns. However, the computer can have as many as eight creatures in battle, meaning eight turns. Keep in mind though that when you "pass" over a character you do not want to use, the turn is cut in half, giving the next character the half-a-turn. This means that you could pass every character and have eight turns, but how pointless would that be? Keep that in mind, because landing a critical hit (by attacking your opponent's weakness) does the same thing: it halves the turn and allows the next creature to attack.

Imagine landing eight critical hits in a row on your opponent. Yeah, it feels damn good, especially when you have a line-up of creatures that can tackle any monsters in the area with ease. But to become powerful, you first have to avoid being sacked by critical hits yourself. The street goes both ways in Nocturne in this regard, as running into the wrong type of monster can absolutely wipe out your party. We're talking confrontations where monsters who, because of their alignment and abilities, can decimate your party because they're landing criticals getting extra hits. Yes, that's a big blow to the psyche, but the combat is so deep and entertaining that a quick trip to an online Frequently Asked Questions page (like on gamefaqs.com) will get you past the tough parts.

Nocturne is so fun and engaging that I feel it is worth some punishment to experience it. And that's because of just how much there is to find in this game. The story certainly is interesting, enough to hold the attention most of the way through, but the gameplay is the main thing that will keep you hooked.

The first thing when thinking about Nocturne's gameplay hook, it has to be the "creatures" (they're actually demons) themselves. I estimate there are roughly 200 different demons in Nocturne, each one with a unique look and personality, not to mention their unique abilities and attacks. The demons' looks run from cutesy to ominous, celestial to beastly , and almost everything in between. There are your ooze piles, lady vampires, skeletal harbingers of the apocalypse, floating goat-headed demons with wings and fire sprouting from between the horns on their heads, tiger demons with their head in their chest and claws like Wolverine, and hell, the exclusive presence of Dante from the Devil May Cry series (albeit Dante from the horrendous Devil May Cry 2) in the American version of Nocturne.

And the other gameplay hook that is just as fun is the customization your creatures' and main character's abilities. There are eight skill slots for each creature to have eight abilities. When a new ability is earned by leveling up, the player can choose to discard that new ability or replace an older one. Again just like Pokemon. The amount of customization in this game is staggering. as new abilities are earned at a pretty reasonable tick, at least once every three or four levels.

But Nocturne's customization is deeper because of its demon fusion system. Almost any demon at your disposal (except for oppositely aligned creatures) can be combined with another one to create a new, more powerful demon. And, depending on the time in the game, it's even possible to insert a third creature into the fusion for an extra ability or stat-increase. The first demon you select for the fusion process is the most important one, as it determines the base abilities the new creature will have. For example, even though two demons can make the same new creature, depending on which demon was used first, the new creature will have different abilities, statistics and even an adjusted alignment. Part of the creature alignment in Nocturne is whether a creature can null, reflect or absorb an attack. When an attack is absorbed, nulled or reflected, the attacker's party loses *all* of their turns. This is the reason why Nocturne is such a difficult game, because of the importance of creature alignment. And the creature customization in this game is flexible and is there for your benefit.

So, there's all this wonderful gameplay, but in RPGs the story is possibly more important than the gameplay. So it is that Nocturne's story delves into themes of the occult, specifically into questions about "who" it is that really shapes the world we currently live in. The game begins with the main character and two friends visiting their favorite teacher in a Tokyo hospital. Once they reach the hospital, all of Tokyo is obliterated in a blinding light....except that your character, the friends, the teacher and some nut job in a primp purple pimp suit named Hikawa have survived the blast. Except your character is now turned into a demon by some kind of bug, not unlike The Matrix. So that explains why your character has control over demons....

So, without giving too much away, all of Tokyo at this point is gone. A new world is going to be formed in place of the just recently obliterated old one. It is your character's place to help determine whose "reason" is going to shape the new world, whether that be a world of "peace," where nothing exists at all, a world where only the strong survive, or else. It might be disappointing to some that Nocturne has barely any introspective characterization. While there are effective twists to the storyline that keep you interested, the characters are not exactly endearing. They shed hardly any light on themselves as people, through personal history, etc., and for the most part have one-sided personalities. Although that is a short-coming, those who aren't put off by the prospect of considering occult ideals in a game will find plenty of food for thought. Nocturne really steps up to the plate and offers some very thought-provoking messages and ideas, not just for a videogame but for entertainment in general in America.

As for the game's presentation, the graphics have variety and look nice and clean, and the music is just plain awesome. Nocturne uses cell-shaded graphics on its characters to an awesome effect, as the in-game graphics look a lot like the anime artwork that so clearly inspired its style. The graphics are also remarkably consistent: even though there's a wide variety of character designs in the game, nothing seems out of place or unnatural. Every character is a seamless part of Nocturne's macabre world. While the environments aren't particularly big, some of the level designs are just awesome. Some areas have lights pulsating within their walls, while others resemble Victorian styled parliamentary buildings, Shinto shrines, are a mirrored building that stretches into infinity, or an upside-down pyramid pointed into the ground.

I guess "variety" is the single word that can describe Nocturne, because just like the graphics and the creatures and everything else, the game's sound is even more wonderfully varied. The game's 30+ tune soundtrack ranges from power-rock to J-Pop, light piano chords to ominous synthesizers, and even from organs to an Ogre Battle-inspired tune. I love this game's music, as there isn't a single tune that hits a wrong note, nor that some how doesn't match Nocturne's tone nor enhance it. And the in-game sound effects and monster sounds are well-done too, much better than in Digital Devil Saga, I must say. They just have more "oomph" to them than in DDS. If you can find the "Director's Cut" of Nocturne, which comes with the game's soundtrack, nab it by all means.

There's all this great stuff about Nocturne, but the game isn't all gravy. I can not understate how difficult this game is or how necessary, at times, a well-written FAQ will be. I had to use one at three different points just to get to the next part of the game, either because I didn't know where to go or I just needed that one little "nudge" hint about a boss.

Nocturne's difficulty is definitely a make-or-break factor in gamers' enjoyment of it. It will be a pratfall for many folks and is one of the few negative things about Nocturne. The other big negative is the vague progression requirements that pop up from time to time. Sometimes it's not very clear where your character is supposed to go, nor even where it's possible to go on the map. The distinctly Japanese names of the places require a keen memory to remember the first time. For example, if you put down Nocturne for a long period of time because you're flustered, good luck trying to figure out where it was you were supposed to go when you stopped playing. Fire up that FAQ ASAP.

Despite a couple important negative aspects, Shin Megami Tensei: Nocturne is as close to an essential as a Playstation 2 RPG gets. This is the Playstation 2's Panzer Dragoon Saga, in that it backs up all the well-deserved hype. The game's difficulty level won't be everyone's cup of tea, for sure. But anyone who is the least bit interested in playing Nocturne, and who can approach the game with a bit of an open mind, it is one of the most unique, rewarding videogames available.
Review Page Hits: 1 today (557 total)
mediahook