Sin City explodes off the screen with magical effects and masterful directing. It is without a doubt the Best Movie of 2005. This movie will set the standard for movies of its type for years to come. 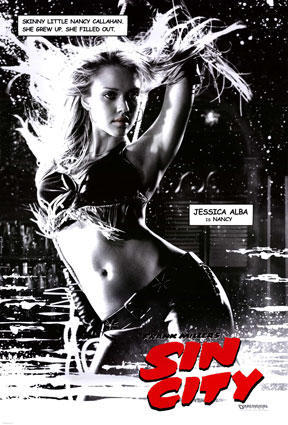 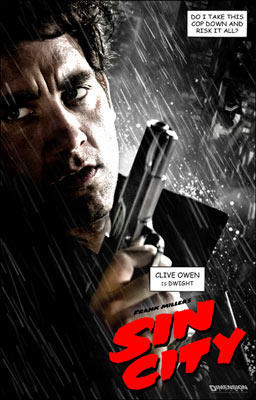 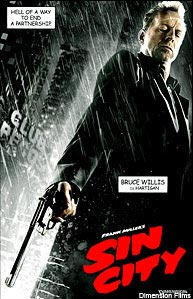 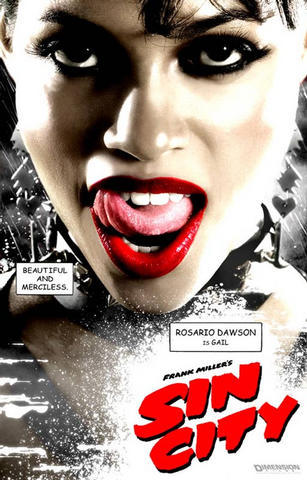 The Story:
Sin City is the vision of Frank Miller. This movie is based on three of his very popular books (The Hard Goodbye, That Yellow Bastard, and The Big Fat Kill), and Sin City is the best comic book turned movie ever made. Sin City is like an alternate universe where crime rules the day. It's so much like a big city like New York or LA, that it is creepy. The movie focuses on three main characters. The first is Hartigan (Bruce Willis) who is a married, aging cop on his last day on the job. His job haunts him. He must find a young girl before she gets raped and killed. As the movie goes on, you realize that's the only thing that's on his mind.

The second story is of Marv (Mickey Rourke), a hardened ex-con, who has led a tough life, meets a beautiful young woman named Goldie (Jaime King), only to find she is dead when he wakes up the next morning. He swears to avenge her death and it leads him all over the city in search of someone with some answers, finally leading him to a farm where he will get all the answers he could possibly want.

The third story is of Dwight (Clive Owen) who falls for a waitress (Brittany Murphy). He then must protect her from her brutal ex-husband, Jackie (Benicio Del Toro), who is a menace to the whole city. Jackie and his friends get drunk, taking off with bullets ringing in the air. Dwight follows them to ensure they do not kill anyone. They drive straight to Old Town, which is a town run and protected by ruthless, gun-toting women. Trouble soon ensues and the truce between the cops, mafia, and the women of Old town, hangs by a thread.

The Cast:
I have never seen a cast as big as this ever in a motion picture. The all-star cast includes Bruce Willis, Mickey Rourke, Jessica Alba, Clive Owen, Nick Stahl, Powers Boothe, Elijah Wood, Rosario Dawson, Benicio Del Toro, Jaime King, Deven Aoki, Brittany Murphy, Michael Clarke Duncan, Carla Gugino, Alexis Bledel, Josh Hartnett, Michael Madsen, and many more. The acting was downright amazing, everyone does a good job portraying the characters of this movie. This has got to be the best casted movie I have ever seen.

The Directing:
This movie actually had three directors. Frank Miller and Robert Rodriquez did most of the directing, but one scene was directed by Quentin Tarantino. I am guessing it's the scene with Miho (Devon Aoki) with the Samurai Swords, the first scene in which she appeared. Sin City was directed beautifully, every shot was masterful. I especially like how the movie was black and white, yet there was also some color thrown in. The action scenes were filmed great as well. The backgrounds are entirely digitally generated, but you don't notice it, it captures completely the gritty cityscape. The directing just seems to draw you in even more than the dialogue does. Wonderful amazing directing.

Final Thoughts:
Exceptional movie, but one that is extremely violent, brutal, and gruesome. Definitely keep the kids away from this one, at least until they are old enough to know it's not real. Visually, this is the greatest movie I have seen since I saw The Matrix for the first time. Overall, an amazing movie, with an all-star cast, and great directing. Highly recommended!
Review Page Hits: 0 today (532 total)
mediahook