The Skylanders race on land, across sea, and through sky 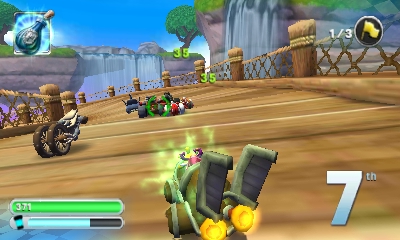 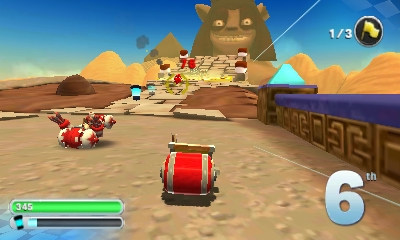 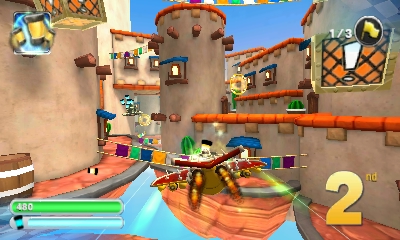 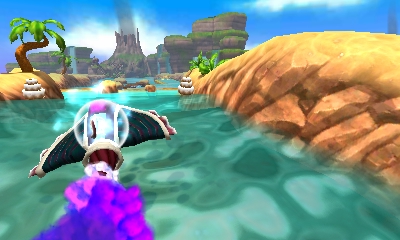 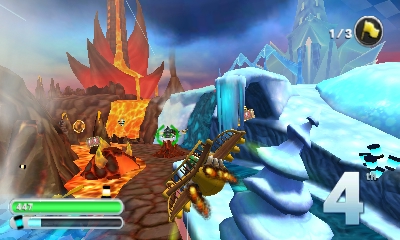 The Adventure mode is the main meat of Skylanders SuperChargers Racing. It shares many similarities to the mode found in Sonic All-Stars Racing Transformed, where you follow along a map of sorts to complete events. With each event completed, more of the map is available to you until you reach the far right side, where the final event to complete that current cup is located. A difference here is that there is a story that loosely ties everything together. It stars Pandergast, who hosts a Racelandia wrap-up show that ends every cup, promoting the idea that the winner of the Racelandia series of cups will earn an all-powerful MacGuffin that can be used for one wish. These story segments don't run too long and are just a neat bonus for completed cups.

There are a wide variety of events to be found in SuperChargers Racing, from the most basic three lap races against other opponents, to more creative racing escapades like running over Chompy enemies to score points, events where bombs litter the track that you must avoid to drive far enough to reach the goal distance, events where your vehicle is poisoned which requires you to continuously collect food along the track, and one event where you're against three racers to see who can grab and deposit the most sheep before time runs out.

Every event has an easy, normal, and hard difficulty and up to three stars to obtain. Getting 1st in a race event or just completing the event's goal in any other kind of event awards three stars to the player in hard difficulty, while in easy and normal difficulties, the player can only earn up to one or two stars. Depending on the difficulty, during races the AI can be more of a pain, and despite all your racing skill, they will usually stay close behind you whereas in other events the required score to complete them changes.

An unfortunate part of the Adventure mode is that there is a lot of content locked behind having additional figures, mostly vehicle and trophy ones. Many gates are locked, requiring you to have a certain element of vehicle to get passed. In addition to that, a third of the Adventure mode is locked behind having specific trophy figures, meaning that six races are inaccessible unless you have the three trophy figures required to access them.

Skylanders SuperChargers Racing's Starter Pack comes with two characters and one vehicle, an air one. While land and sea vehicles are required to play the game, Pandergast gives those lacking land and sea vehicle figures to use that he calls "loaners", borrowed vehicles that don't have the greatest stats (they can't be leveled up either) but are serviceable for the various races in the game.

Unlike other versions of Skylanders SuperChargers, with the Nintendo 3DS version you only need to scan a given figure once to have it permanently saved to the game's memory. This means when you want to change your character, you don't need to have all of your figures by your side to scan and input them into the game over and over again. When starting a race or event, both your character and vehicle materialize via a loading screen, which can get grating after seeing it multiple times before each challenge.

As you complete races and events in SuperChargers Racing, both your character and vehicle figures gain experience points. Each time they gain a level, they gain a special boost in stats, whether with handling, acceleration, top speed, armor, and so forth. However, these stat boosts only apply to character figures from SuperChargers and not previous entries in the series. Characters from those entries will still gain experience and levels but no stat boosts will be given to those figures.

As stated, there are three types of vehicles in SuperChargers Racing, and each has five unique races specifically built for them (and again, there are two extra races for each vehicle type gained from trophy figures that are contained in the more expensive racing packs). The lack of a tutorial, especially for a kids' game, is baffling, as each vehicle has its own series of button inputs specially used for them.

For instance, a land vehicle can not only drift, gaining a boost once the shoulder button is released, but it can also jump over certain hazards and chasms. Meanwhile, a sea vehicle can temporarily dive underwater, which slows down the vehicle, but also allows access to hidden shortcuts. It can additionally perform flips in the air with the press of the R button to gain a boost upon each successful flip. Finally, air vehicles can have the player press the B button to perform a spin, allowing them to break through cobwebs without slowing down. Holding the R button will cause an air vehicle to unleash its afterburner, giving a continuous boost of speed at the expense of control.

All vehicles can shoot out ammo with the L button, having the game automatically target opponents in front of you. Each vehicle has a health bar that goes down when attacked by another racer or from a specific item. When it is fully depleted, the vehicle spins out before starting up again, refilling the health bar in the process. Food placed on the track can help restore lost health, as well as special items found from item boxes strewn along each race. Items are automatically used when a vehicle smashes through an item box. These range from offensive items like a Tiki mask that blasts all vehicles ahead of the user with three damaging lightning bolts, to defensive items like a potion that slowly regenerates the user's health, plus a shield that blocks all enemy attacks.

Apart from the Adventure mode, there is a Cup mode that sees you taking on each of the five races for each vehicle type against seven AI opponents. Placement in these races awards points to the racer with the most points at the end of the five races being the overall winner. There are three difficulties for each, though winning all of these don't appear to have any effects, such as new unlockables. There isn't even an awards ceremony to congratulate you on your victory, so the mode overall seems rather undeveloped.

Multiplayer is also available in SuperChargers Racing, offering local multiplayer where all parties need a 3DS and a copy of the game, as well as a completely barren online multiplayer option. However, if you have distant friends with the game, you might have better success finding someone to play with over the Internet.

Skylanders SuperChargers Racing is a bit more than a Mario Kart clone. It offers some new ideas to the familiar formula while also delivering solid racing action. That notwithstanding, there is still the same cost barrier of entry to get everything out of the game by purchasing every element of vehicle and racing pack to get the full SuperChargers Racing experience. Still, I enjoyed my 10 hours with the game from the limited amount of figures I had, so if you're yearning for a new arcade racer for the Nintendo 3DS and have exhausted your fun from Mario Kart 7, then Skylanders SuperChargers Racing is a nice alternative.
Review Page Hits: 0 today (415 total)
mediahook