So THIS is the hedgehog who vexed Nintendo during the 90's! 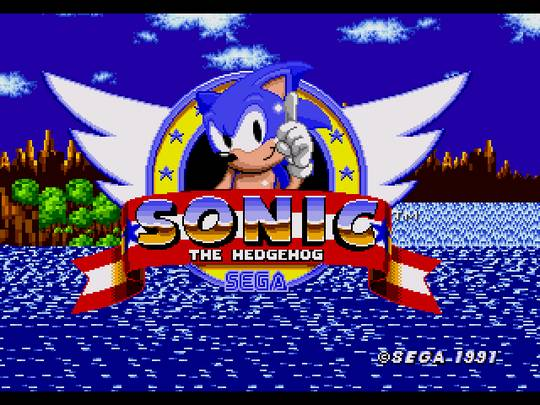 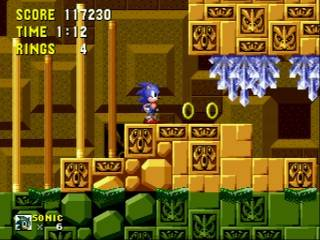 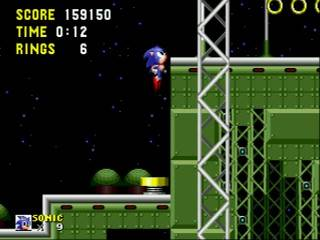 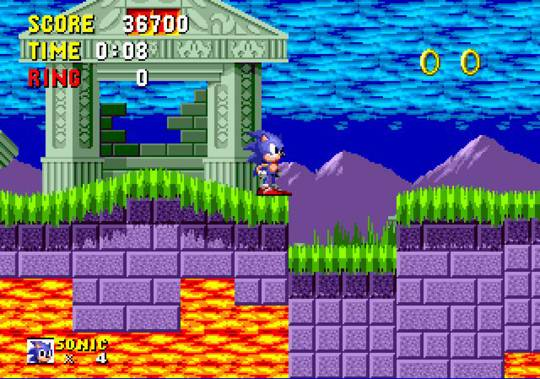 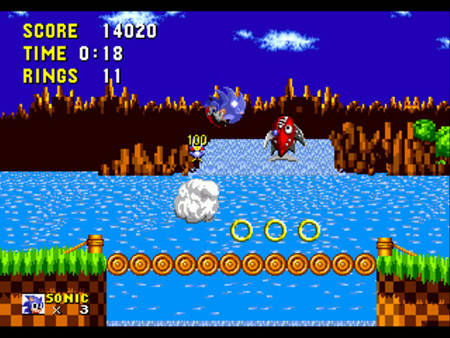 Sonic the Hedgehog. That name has been in the minds of practically every gamer who grew up in the 1990's. When Sega needed a new mascot to take on Nintendo's Super Mario, the programmers tinkered with some ideas that will appeal to not only Japanese gamers, but around the world as well! The results? A fast, spiky, and short-tempered blue hedgehog who won our hearts and made the Genesis (a.k.a. Mega Drive) a household name. Sonic was so popular, he was featured in two separate cartoon shows, a comic book series, an anime show, and even in food products!

Dr. Robotnik (a.k.a. Dr Eggman) decided to take over the world by encapsulating small animals into robots and forcing said robots to hunt for the Chaos Emeralds, six (nowadays seven) separate-colored gems that gives the user ultimate power, particularly when combined. And Sonic has to stop him!

Obviously, this is a platforming game with six worlds comprised of three levels each with a battle with Eggman in every third level. You have to keep Sonic alive by collecting rings and fighting your way to the end. If you get hit, all the rings will scatter! You'll lose a life if you get hit without any rings, fall into a fatal trap, drown in the water, or run out of time. Collecting 50 or more rings when you clear the level will make a big ring appear and give you a chance to play a bonus game for one Chaos Emerald; you'll need them all to see the good ending.

What makes this game unique, however, is that Sonic doesn't just run and jump on enemies. He can pick up speed and go very fast, he can roll into a ball and mow down baddies, and he can also ball-jump on enemies as well. Sonic can also break little boxes that contain more rings, a shield, and even a 1up! The only bad thing is that Sonic can't swim, based on a misconception that hedgehogs hate water. Aquaphobia? Who knows. Despite this weakness, he's easy to control. What's funner than mowing down enemies? Going through loop-de-loops really fast! Then again, losing a bonus game just to get an Emerald stinks.

The tunes are almost as popular and well-known as Super Mario's theme! From the cool starting title to the creepy drowning music, the soundtrack is perfect for a game like this, and each track knows its own role! Even more iconic is Sonic's sprite. What MegaMan is to the NES is Sonic is to the Sega Genesis: awesome! Also of note is Eggman's expressions when you're fighting him; happy when you get hurt, startled when you hurt him and burnt when you defeat him and his creation gets blasted to smithereens. The Green Hill Zone is lush and green with checkerboard patterns, the Spring Yard Zone feels like a pinball world, the Labyrinth Zone is ancient with waterfalls and pools, and the Scrap Brain Zone is mechanical and heartless. My only complaint is that the graphics doesn't look as bright as other Genesis games.

This game is a perfect start for an awesome creature like Sonic the Hedgehog. The story, baddies, sprites, music, and just beating up Eggman is more than enough to deviate from the old platforming mold shaped by games before it. This game is proof of why Sega was proud of their slogan, "Genesis does what Nintendon't", and few games are as memorable as this one. No Sega Genesis fan should ever be without this game. It goes to show how, at the right place and time, a new idea can go a long way, and Sonic paved the way for Sega to start the great 16-bit wars with the giant of a company, Nintendo.
Review Page Hits: 3 today (574 total)
mediahook