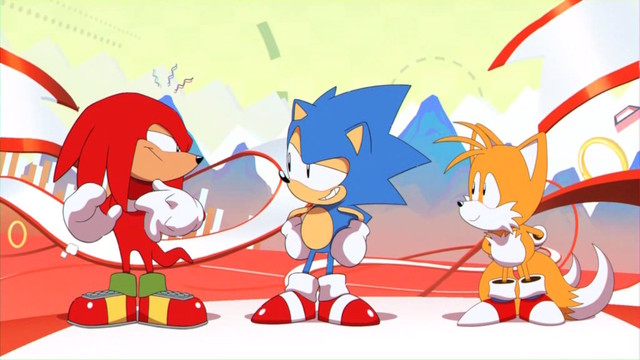 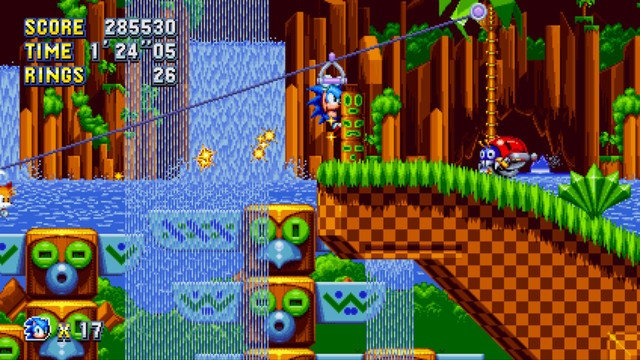 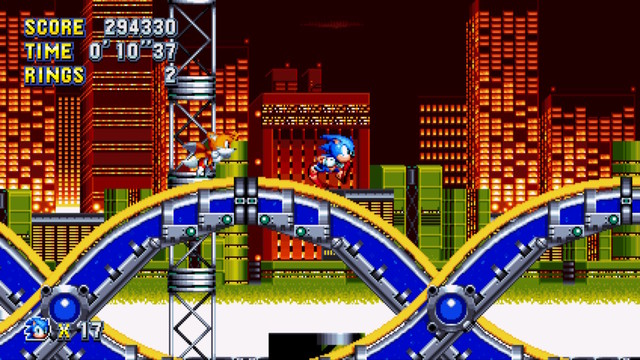 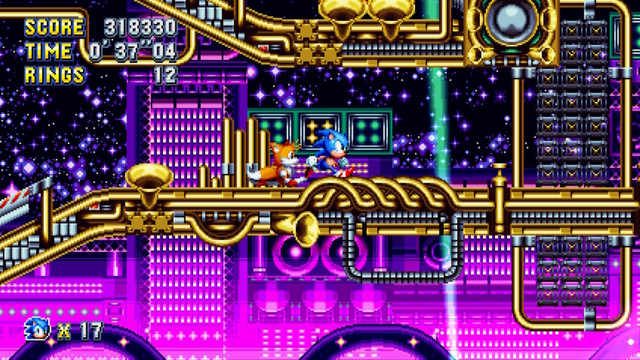 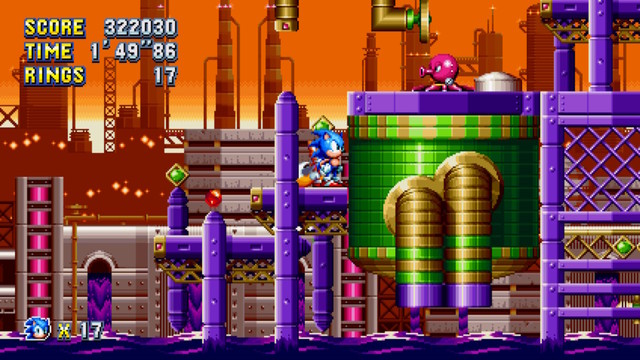 What better way to celebrate a milestone anniversary for Sonic the Hedgehog than going back to his roots? I don't just mean "going back to his roots" as something some marketing executive for Sega or Sonic Team would say and then have the publisher push out a game like Sonic the Hedgehog 4. Heck, even Sonic Generations was a wonderful 3D attempt at bringing 2D Sonic back into the fold, but that game, too, differed from classic 2D Sonic games of old in the same way Sonic 4 did--physics. No, I say it as an honest to the Master Emerald truth.

For more than a decade now, Sonic the Hedgehog fans from the 16-bit era of gamers clamored for a classic 2D Sonic that played and looked like the highly praised games on the Genesis, namely Sonic the Hedgehog 1, 2, 3 and Knuckles. We'll also throw in the Sega CD's Sonic CD as well, which was just as stellar, speedy, and engaging of a 2D Sonic adventure. With the team devised of all-star Sonic fan game creators and Sonic Team itself, Sonic Mania would be the perfect 2D Sonic game, if not for some niggling glitches and bugs.

Sonic Mania is a brilliant ode to classic Sonic the Hedgehog games. Fans of those games finally receive the Sonic game they've desired for what seems like ages, because to make a 2D Sonic game this good from Sonic Team and Sega apparently does take ages. It's in no short work due to the stellar grunt work by a team that really knows their stuff about classic Sonic (Christian Whitehead, Headcannon, and Pagoda West), whether it's the perfect physics when compared to the original Genesis classics; the multi route level design with room for extreme amounts of exploration, careful platforming, and sections to blaze a trail down. There are many references to past Sonic games plastered in zones in easy to see locations, plus many that require you to pay careful attention to your surroundings.

Let's talk about the physics first. Recent Sonic games, and I guess earlier ones too (around the 2000's and older) held the same strategy for sections of levels, most infamously loops. Rather than being able to merely speed with your own momentum carrying Sonic through a loop-de-loop, for instance, games of the modern era and on would require the use of boost pads at a loop's beginning to give Sonic enough speed to rush through them. Even when controlling Sonic, stopping or starting the Blue Blur, the amount of room necessary to get him to top speed or to stop him was much different. All of these problems in Sonic Mania are gone. It's as if the development team never heard of Sonic games after Sonic CD, and just made a game to continue the classic physics of the Sonic games we saw on the Genesis.

Level-wise, Sonic Mania offers a traditional take on Sonic the Hedgehog level design. There are high paths to take that require the most amount of precision platforming, but usually the rewards are worth it, with regard to a generous supply of helpful item capsules. Then, there are the bottom and middle paths in levels where lots of exploration is to be found. Unlike so many modern 2D Sonic games, the bottom path isn't as dangerous as usual because bottomless pits are strewn about in levels like free badges at a gaming convention. Only a few particular levels in Sonic Mania contain bottomless pits, so falling generally doesn't mean an instant death, or at worst, not knowing what awaits you by falling off a platform. In general, most levels have multiple paths, and you need not just stay on one as they're constantly interacting and intersecting with one another, all leading at the end to one converged path at the end of the level.

Sonic Mania consists of twelve main zones. Some criticism thrown towards the game is that out of these twelves zones, only four are actually wholly original. This is a fair criticism somewhat, but at the same time, the zones from past Sonic the Hedgehog games like Green Hill, Chemical Plant, and Flying Battery, for instance, aren't exactly similar in design at all. To use a zone as an example, in act one of Chemical Plant, a zone originally found in Sonic the Hedgehog 2, you'll have familiar obstacles like tubes that shoot out harmful blue liquid from them, vertical passageways that fill up with pink water that require Sonic to jump on boxes to escape the flooded passage, and the usual cavalcade of Chemical Plant Zone enemies are found.

Whereas with act two, the background changes and new level gimmicks are introduced, this time ones that never appeared in the original Chemical Plant, such as liquid gel that you can insert a foreign material into to make it jelly. Sonic can get some serious air off of. Also, if there's any worry regarding level design in general, both acts of each and every returning zone are either remixed--making original designs of familiar challenges and gimmicks--or completely fresh with new ideas and concepts. Act one is generally modeled in the way of the classic Sonic game it appeared in, save for level design which is all new, and act two is a completely new take on the zone.

What of the four new zones in Sonic Mania? These four feel fresh as well as being hard to tell apart from the originals. I don't mean that in a bad way. I mean that these could be mistaken for zones from the original Sega Genesis and CD releases. They're that good, all the while offering ingenious design and exciting level gimmicks, such as Studiopolis' launching Sonic off of movie-themed clappers, spinning inside BINGO machines, and being elevated out of a popping popcorn machine.

Each act ends with a boss battle against either Dr. Eggman (perhaps I should call him Dr. Robotnik in honor of this being an ode to classic Genesis games? ...Nah) or one of the Hard Boiled Heavies, machines that serve as the other half of antagonists in Sonic Mania. Each boss is an original fight, but many times they'll also be remixed takes on battles already seen in past 2D Sonic games with a twist. For instance, Green Hill Zone's act two boss is the Death Egg Robot, the final boss of Sonic the Hedgehog 2. This time around, he marches your way while you pelt him with attacks from high ground in this auto-sidescrolling section. Others are completely original like a battle reminiscent of a certain classic Sega puzzle game.

Sonic Mania has a lot of longevity to it, just by virtue of being a replayable game in general. However, there are ways the devs push you to play more. A mainstay from Sonic the Hedgehog games--collecting all seven Chaos Emeralds--is here, requiring the player to find a bonus ring hidden in acts (with more than one to be found in levels) to enter the Special Zone. Then, you must gather rings to add to the amount of time to your limit while collecting blue orbs to boost your top speed. The overall goal is to catch up to an escaping UFO carrying the Chaos Emerald before time runs out or you fall of the course. Then, there are Sonic the Hedgehog 3-style bonus stages that appear from level checkpoints that play just like that game, but instead of Chaos Emeralds, this time you earn medallions that unlock extra content in Sonic Mania.

Other bonus modes include a competition mode in levels, as well as a speed run through various acts for the top score on an online leaderboard. Finally, you can play the story as one of three characters: Sonic, Tails, Knuckles (or a combination of Sonic & Tails), complete with one player playing as Sonic and the other as Tails, making for some real nostalgia as my brother and I enjoyed Sonic Mania just like we did Sonic 2, 3, Knuckles, and CD as kids.

I would be remiss if I didn't talk about Sonic Mania's amazing presentation. The colors presented in the game are vivid, vibrant, and lovely, and I'm happy the Mania team didn't decide to go with a more modern look instead of their current 16-bit retro style. Limited amounts of slowdown present themselves during my over ten hours of playing the game, though unfortunately, some glitches like getting caught in level geometry or falling through the floor of a level all the way to its bottom in a way that certainly wasn't intended were happenings that occurred to me while playing. Meanwhile, Tee Lopes grants Sonic Mania players with awesome sounds, and again, these fit in just as well as with any other classic 2D Sonic game from the Genesis era, most prominently, Sonic CD. The new material is just as delightful as anything else I've heard from the classic games, and the remixed songs are extraordinary, never failing to put a nostalgic smile on my face when I first heard them.

While Sonic Mania is exactly what classic 2D Sonic fans wanted, right down to the physics and art, what of players who didn't grow up with our blue needlenose pal? These players will discover just why the gaming world went wild back in the early 1990's, and for excellent reason. Those who are new to 2D Sonic or started playing Sonic at a later age or at a more modern generation have an excellent platformer to enjoy all on its own. Despite this, that doesn't stop Sonic Mania from becoming as close to being, feeling, looking, and sounding like the old 2D Sonic games without actually being an old game. Just saying that by itself is high praise enough for the tremendous work for all parties involved.
Review Page Hits: 0 today (927 total)
mediahook