Sonic Rush is a classic Sonic the Hedgehog game that plays a lot like the Genesis versions. With nice visuals, music, and excellent gameplay, this title is a must for any DS owner. 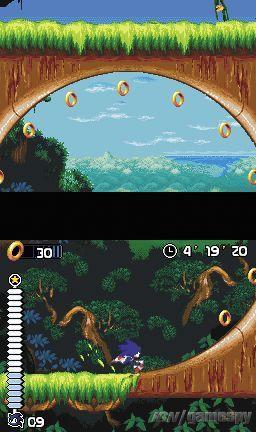 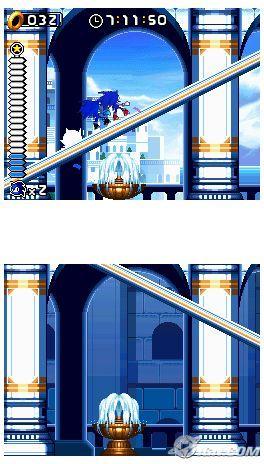 Sonic Rush has near flawless gameplay. It's easy to learn the controls (so anyone can pick it up and play) but the levels become more challenging as you progress through the game.

When you start playing the game, you choose between Blaze the Cat or Sonic the Hedgehog. You can beat the game with Sonic or Blaze, but to win it all (and to see the whole storyline) you need to beat it with both characters. The zones for Sonic and Blaze are similar, but different enough to offer new challenges when playing with the other character. The background music for Blaze is likewise similar, offering a remix of Sonic's music at each level.

Sega has added a map system (sort of like Super Mario 3 and Super Mario World) for this game to get Sonic or Blaze from level to level (or zone form zone). Just like past Sonic games, each zone is unique and challenging in its own way (the zero gravity is the best!). The Zones have 3 Act's, with the 3rd Act being the boss battle. The Acts are new, but have similarities to classic Sonic the Hedgehog Acts.

When you enter a zone, you'll notice a unique feature of this game: it spans both DS screens! Sega has done a nice job of getting all this fast paced action to go from screen to screen with no problems at all. There is some awkward times whenever Sonic is passing from screen to screen and a part of him may dissapear for a second, but its realy not bad at all. You'll get used to it after a few levels.

The visuals (graphics) look beautiful! Again, it looks like a classic Genesis version of Sonic, but with better visuals and a lot more speed (hence the name 'Rush'). The game is 2D, but the boss battles add 3D elements. You will not be dissapointed with the visuals.

The game does not feature a Wifi online mode as it was released prior to the Nintendo Wifi connection. It does offer up multiplayer, and even better, you only need one game cartridge to play multiplayer. This mode features two players racing through an Act against each other. That's it. Not much. That being said, the single player (like all Sonic games) is the bread and butter.

Sonic Rush is a great game, but really does not offer any extras after you beat the game (a jukebox), and there are no minigames (which would have been nice). After you beat the game a few times, you will most likely put it down and quit playing it for a while. However, like all classics (and I do say this is a classic), you will eventually find yourself wanting to play through it again, so it's worth keeping.