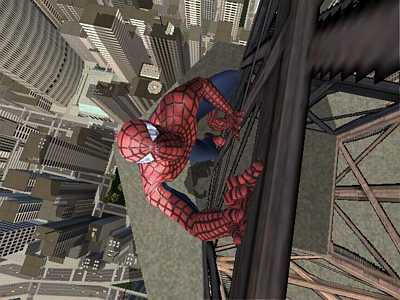 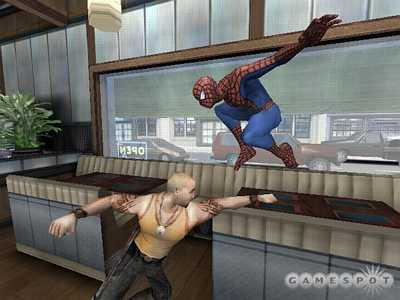 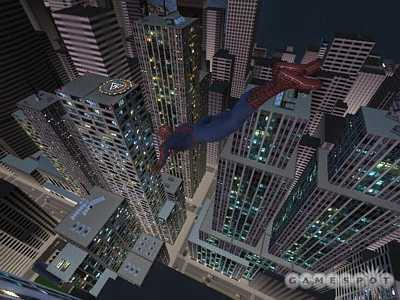 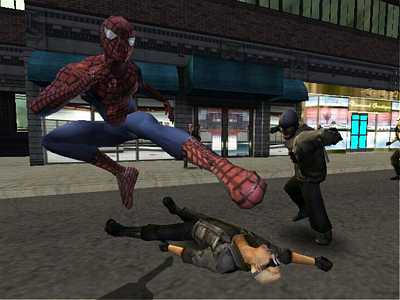 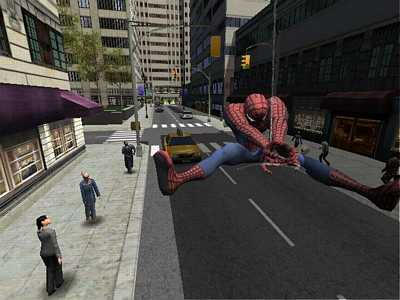 Well, not exactly, but it's pretty close. The biggest edition to this Spidey game is the fact that you can go anywhere you want on the island of Manhattan. You can jump on cars, walk the streets, reach the highest buildings, and even go inside stores and shops. This is what Spider-Man fans have been waiting for, a free roaming, and a web-slinging good time, it's worth picking up just for that. But, let's start at the beginning, the game play.

Game play/Control -- Just like the previous one this Spider-Man 2 follows the movie, and also like the first one, there are parts that aren't in the movie. Not only do you battle Doc Ock, but Rhino, Mysterio, and Shocker as well. Black Cat also returns to tease and help. You start off by learning the basics on how to play. The biggest gripe to be had with previous games is the wall crawling, especially inside. Well the good news is its gotten better. The camera works really well while you're on the walls, which leads to less frustration. There are few indoor battles, but when there is one, it's large enough to swing in with ease. The fighting has been reworked as well, and you also get an extended move and combo list. These lists are lengthened by buying techniques in the various shops and comic books stores throughout the city. Putting together the combos is easy. The only thing about the game play that gets a little old is the civilian missions you have to do to increase your Hero Meter. The game may also seem a little short to some, partly because it's based on the movie. But not to fear, once you beat the initial game, there is a massive amount of side quest to accomplish. They can keep you busy for weeks, even months. Plus, it's still a blast just to swing around the city.

Sound - Great. It has the music from the movie, as well as the voice talents of Tobey Maguire, Kirsten Dunst, and Alfred Molina. They did a really good job of bringing the movie feel into their performances. The voice overs aren't bad either, clear and crisp. Sometimes the music gets a little repetitive, but half the time you're too busy to notice it anyway.

Graphics - They very nice... for the most part. The CG is really well done, as are the buildings and the streets below when you're swinging. But when you talk to a person on the street or you go to a regular cut scene, the Xbox can do better. Sometimes the character models from the street seem like they were left over for the PS1 Spider-Man, but that's minor.

Over all, if you're a Spidey fan, this is a great game. But even if you aren't, it's still a great time to be had. This game is worth the money and will keep you playing for months after you get it.
Review Page Hits: 0 today (225 total)
mediahook