Are four Spider-Men really better than one? 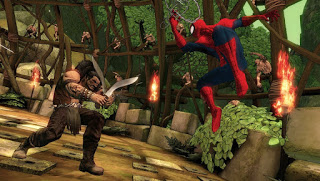 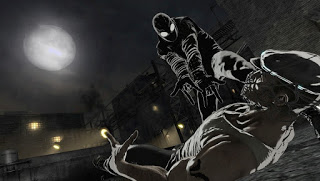 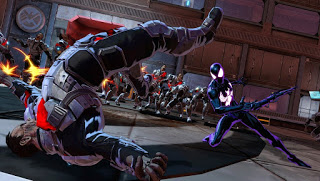 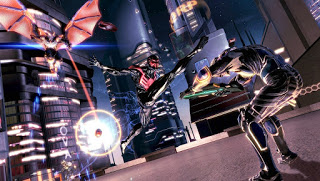 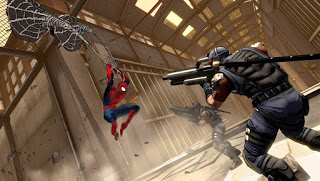 Back in fall of 2010, Beenox was approached to work on a brand-new Spider-Man game. Since then, they've been the main minds behind the web-slinger's video game dynasty. Their very first attempt was an incredibly admirable effort in Spider-Man: Shattered Dimensions, a game that takes four Spider-Men from alternate universes and puts them together in one all-new adventure. But are four Spider-Men really better than just one?

The villain Mysterio lusts after a special stone tablet. The Amazing Spider-Man interrupts his crime spree, but in the middle of their battle, Spider-Man accidentally smashes the tablet into multiple pieces. No longer does Mysterio need to hide behind weak parlor tricks, as he now has real power because of the tablet. Madame Web contacts four different Spider-Men from four different alternate universes to find and reassemble the tablet pieces before Mysterio's power grows out of control and time and space is forever ruined.

Spider-Man: Shattered Dimensions is made up of three acts, each containing four levels. Each act is made up of a level for each of the four Spider-Men. These four levels can be played in any order. The Amazing Spider-Man has the arsenal of moves that you'd expect from him, while Ultimate Spider-Man has the power of the Venom suit to incapacitate enemies via Rage Mode. Spider-Man from the year 2099 has sections of free fall, where he needs to avoid debris and other obstacles as he makes his way to the ground. He also possesses an ability called Altered Vision which slows down time considerably to make avoiding attacks all the more easier. Finally, and probably my least favorite of the four level types, is Noir Spider-Man. His levels consist of pure stealth, minus the boss battles. If Noir Spidey gets caught by an enemy's sights, he must retreat to a safe area before he gets filled with more holes than a slice of Swiss cheese. It's also bizarre for someone who is supposed to be stealthy to clobber the unsuspecting foes he comes across, as well as make loud quips. It's a total opposite of what one would expect a stealth section of a game to be like.

Rather than approach the game as an open world one like previous Spider-Man titles, Shattered Dimensions features linear levels with little in the way of exploration (save for the brilliant Ultimate Spider-Man Deadpool level). Sure, there are multiple spider tokens to collect, as well as golden spiders, but they are seldom that far off the beaten path. Levels generally have Spidey taking on a member of his rogues gallery at least twice throughout a given level. Such members include Hobgoblin, Kraven, Sandman, Vulture, Hammerhead, and Scorpion, for starters. However, a lot of the villains are drastic departures design-wise from what many fans know. For instance, Spider-Man 2099's version of Doctor Octopus is actually a woman this time around.

Each of the game's twelve full-length levels features fifteen challenges each to complete. These are obviously optional and include things like taking down a certain number of a specific type of enemy, taking out all enemies in a section within a set amount of time, or beating a boss using a specific tactic. Completing challenges nets the player with points that can be spent on combat upgrades, new moves, and increased health. One can even unlock a wide range of bonus costumes for the different Spider-Men, from the Amazing Bag Man to the Scarlet Spider costume.

The main problem with the levels, however, is their length. Most levels will take an average player at least a half hour to finish. Of course, there are plenty of checkpoints for places to quit and start the game back up at, but when one tries to go for the highest achievable medal on each level, playing for a half-hour plus only to find out they failed at getting it, it is a huge annoyance. Perhaps if the levels were split up into sections and those were graded separately, it would be much more manageable.

What is also something that could be more manageable is the camera, which isn't smart or sophisticated enough to stick with the action. This is especially obvious when Spider-Man tries to crawl from a wall to a ceiling. Here, the camera clearly has no idea what it needs to do, causing frustration for the player-- particularly in the stealth Noir stages.

Shattered Dimensions features four Spider-Men, as stated, and each reality features its own art style. While Spider-Man 2099's version of Manhattan is bright, futuristic and flashy, Noir Spider-Man's is dark, atmospheric, and moody. The Amazing and Ultimate Spider-Man levels consist of jaw-dropping cel-shaded character models, which look absolutely incredible. Activision and Beenox got past Spider-Man voice actors from past webhead television series to voice each version of Spider-Man. Neil Patrick Harris of the recent (and awful) MTV series voices the Amazing Spider-Man, while from the 1990's series, there's Christopher Daniel Barnes voicing Noir Spidey. The voice work from all parties is really well done.