Engrossing and rewarding, but falls short 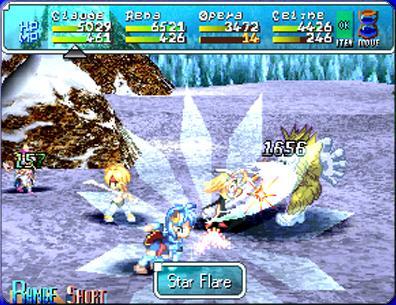 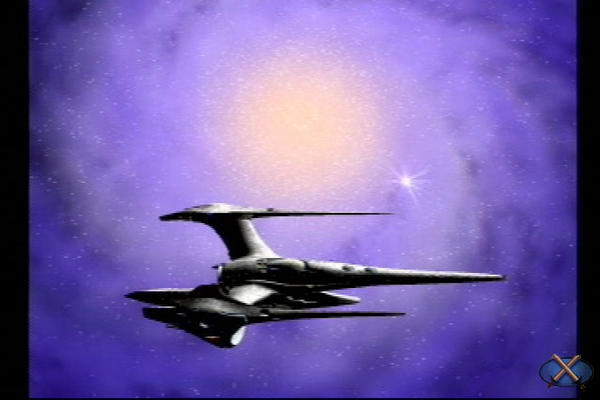 First off, this game is a port of the Playstation 1 title: Star Ocean 2: The Second Story. As a standalone , this game does a pretty good job of enticing the user in for a play through. However, as a port, it does little to garner long-time finds to pick up the game again.

The game does a good job of bringing you into the story. The game begins with a choice of controlling Claude C. Kenny, son of a famous space commander, or Rena Lanford, a girl with little knowledge of her parents or her origins. While initially the choice seems like an excellent option, one soon realizes that the choice has little impact on the games' events or outcomes.

After this intial choice, the player is placed on the planet of Expel with little knowledge of what is going on around them, except that a foreign object that the natives call "The Sorcery Globe" is negatively affecting the planet. For the majority of the game, this works well as it gives the characters a reason to go from point A to point B and back a few times in order to get a better understanding of what is going on and what can be done about it.

Along the way, the player is introduced to a slew of potential recruitable characters (10 possible recruits, plus Claude and Rena), most of which are likeable, despite adding next to nothing to the plot. However, one can only recruit 6 of these characters per playthrough and the inclusion of some characters completely negates the potential to recruit certain other characters. This seems entirely unnecessary, especially when none of the characters really influence the plot in the slightest (a common problem with RPGs offering a slew of characters that can be recruited...).

What the game does exceptionally well, however, is its' battle system. The game plays out in real time, with skills able to be assigned to the L and R buttons, respectively. The player will take control of one character while on the battlefield but is given the option to "pause" the action and select a skill that hasn't been pre-assigned or transfer control to another character. The other 3 characters on the battlefield play out through a mediocre AI system. The AI system has its good and bad points, but what it boils down to is that it won't always do what you tell it to. The biggest example of such would be labeling your characters with the "Save your MP" -type option only to see your characters use 4-5 special moves in a single, worthless battle against a pathetically weak set of enemies. Aside from that, the "Healer" AI works remarkably well and does a great job of clearing status ailments and catching characters at low health, despite sometimes choosing a less mana-efficient method than I'd prefer.

The battles play out quickly and, in most cases, smoothly, which provides for a very enjoyable experience while exploring dungeons or new areas. However, towards the end of the game, there is a serious imbalance in the types of characters that should be used. Late in the game, it is possible for most of the melee-oriented characters to hit multiple times in the same attack, exponentially increasing their damage. However, the caster-types' lack this ability. Couple this with multi-second animations that stop the flow of battle for casters and it quickly becomes obvious that the damage per unit time ratio is much lower for casters than the melee characters. Despite all this, the battles continue to remain enjoyable and entertaining throughout the length of the game.

Towards the end of the game, a lot of "extra" content is offered. A deep item creation system (if somewhat worthless in certain aspects) allows for a lot of fun to be had. I, personally, had a lot of fun with the Cooking system and seeing the plethora of different foods that could be created with various ingredients despite my innate inability to cook in real life. Aside from the item creation system, there is a HUGE optional dungeon that can only be reached AFTER reaching the final save point in the game.

One of my biggest complaints is that there is absolutely no mention of this dungeon or how one could get to it hidden throughout the entire game; the user is just supposed to randomly back track for about half an hour and decide to randomly talk to an otherwise worthless NPC to even be given the opportunity to partake in this extra content. Were it not for this gaming being a re-release with plenty of guides out, I'd have completely missed this content. That seems ridiculous in this day and age; why hide content from the average user? There have been plenty of other games that have added in optional content that did a better job of letting the user know about it. Hell, Final Fantasy (the original) for PSP did a better job by forcing the player to explore the world in which the events were taking place, practically demanding that the user at least discover the locations of these extra dungeons.

Another of my concerns about this game occurs about three quarters of the way through what was originally the first disk of the game. Here, a new element is introduced in the scheme of the plot; the first plot twist if you will. However, this twist has absolutely NOTHING to do with the resolutions of the plot and really has no reason to be in the game other than to prolong it for an extra few hours. Ultimately, I was left feeling disappointed with an otherwise ambitious plot that fell flat. Without giving too much away, it turns out that the actions taken through the better part of the game don't change anything or have any impact in the slightest. Some of the characters' reactions are also completely underwhelming given some of the events that take place, which leads me to my last big gripe.

The plot could have used quite a bit more exposition. There were plenty of places that the game seemed to drag on in talking that really didn't add to the scene or mood at the time and plenty of other places where I expected a lot more talking and explanation to take place. At one point, Claude uses technology foreign to the planet of Expel and the only reaction is to say that he is a fabled "Hero of Light". No questions are asked about how he was able to do what he did or what it was that he was doing. The game has many such moments that just seem to detract from the overall value, which is a shame.

In the end, this is certainly a game that should be played. Without the extra content, I'd say this game could be completed in as few as 20 hours. With the extra content, this game could last much, much longer. With a level cap of 255 and a HUGE plethora of items available for min-maxing as well as the gigantic item list, this game will give completionists plenty to do. Buy, or trade for this, without a doubt; it is worth your time.
Review Page Hits: 0 today (222 total)
mediahook