A simple stragegy game based on Star Trek that starts out fun, but loses its appeal quickly. 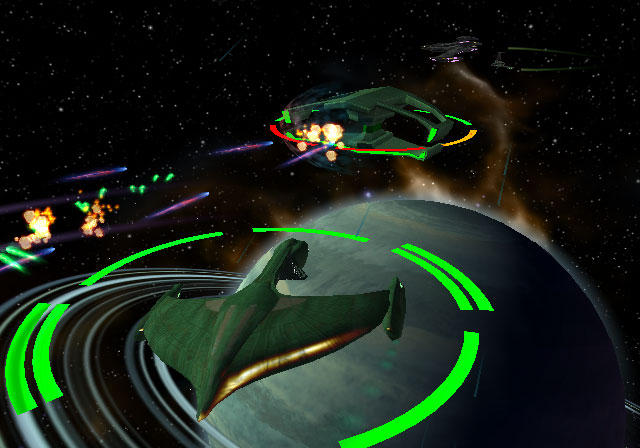 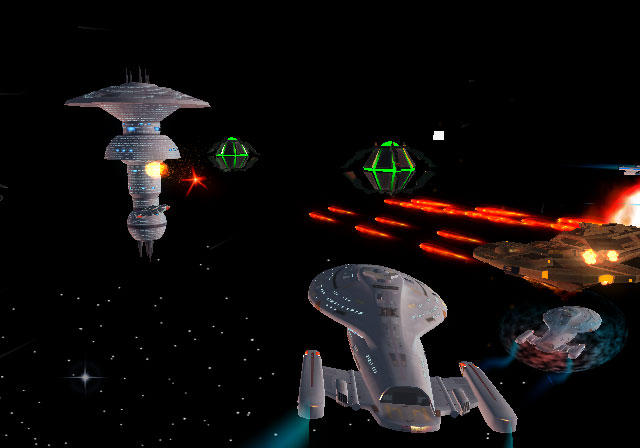 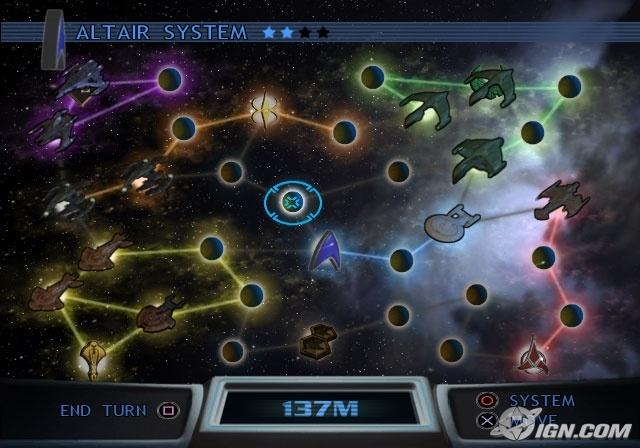 Star Trek Conquest is a simple turn based strategy game that is fun to begin with, but ultimately doesn't hold up. Conquest is a single player game, and has only two modes. The strategy mode pits the player against one to five computer players, where each one is a race from Star Trek. The map is a series of interconnected systems of varying worth. As you clear systems of the NPC ships or opponent ships, you build starbases, defenses, mining stations, or research stations. It's less interesting than it sounds--you can build a starbase or an advanced starbase, a mining or research station, and a set of stationary turrets for each. There aren't many decisions here.

When you bring a fleet to a system you don't control, you enter battle. You can either enter arcade mode and fight it out, or let the computer decide the outcome automatically. The battle mode is simple, but fun, for a while. You control one ship of your fleet at a time, and can switch between each one. You control the direction of travel, and the targeting sensors, which allow you to fire in any direction. Overall, the battle mode feels like "Star Trek" and I enjoyed it very much. The large ships are very sluggish but well armed and shielded. The scouts are fast but fragile. Your shields are also fixed on your craft, meaning if your aft shields go down, you better make sure you keep your aft end away from enemy fire. This battle mode is the game's other option, and you can select to play this mode from the title screen. You can select races, ships, etc., and battle it out.

The music is entirely forgettable. I enjoy the music from Star Trek, but I don't remember a bit of music from this game. The sound effects are straight from the series, which is good. The voice bits are overused, and get old fast.

The graphics aren't anything special. I can very succinctly sum them up as "meh."

Menu options are simple enough, and work. There were sometimes I would select the "System" highlighted when I actually wanted the "Fleet" there. Menus and user interface are passable.

The control in the battle mode is very good. I said to myself, this is how starship combat in Star Trek should feel. This is the game's high point.

Here Star Trek Command lacks. I can't get past the inescapable intro screens that take forever, the long load times and the spinning "loading" symbols (Federation logo, Klingon, etc) that are just really poorly done. You know the pins Starfleet personnel wear in every Star Trek but the original series? Think of how that should look if you spun it a half turn. Well, it doesn't look like that, but rather it looks exactly like it started! When they made those animations, they made them half way, and looped them. It's a little thing, but so lazy.

Another place where the game lacks. Only two modes, one of which is a part of the first mode. No multiplayer. No reason to keep playing for long.

One final nail in the coffin: You can only have three fleets. How am I supposed to ever win against five other players with three fleets? I simply could not continue to expand my territory beyond a certain point without starting to loose somewhere else. Also, most fleets only move from one system to an adjacent one each turn, leading to very long times moving through your own territory to get to the action. I simply decided that I wasn't ever going to win so I stopped.

This game has merits. They just don't outweigh the faults. It's worth a rent, or worth picking up on the cheap, but don't pay the full MSRP of $15. And you poor folks who paid more for the Wii version, well, I'm sorry.