This is a great Star Wars game that puts you into the role of a young Jedi apprentice who is sent on many missions in an effort to become a Jedi Knight. 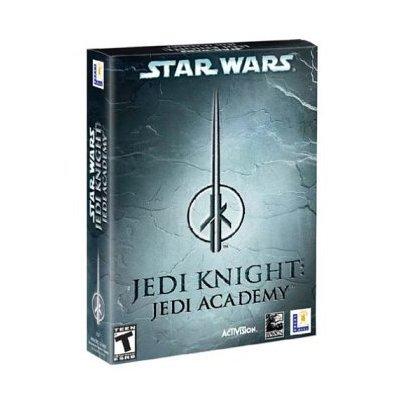 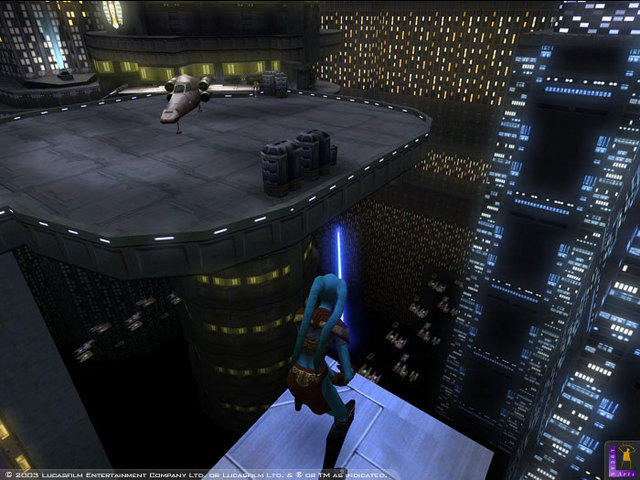 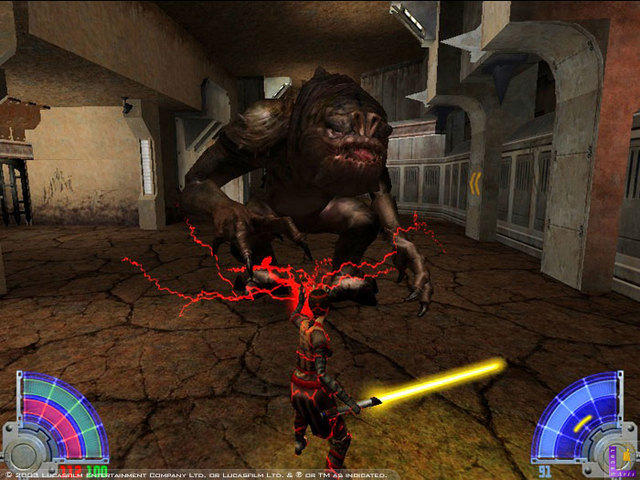 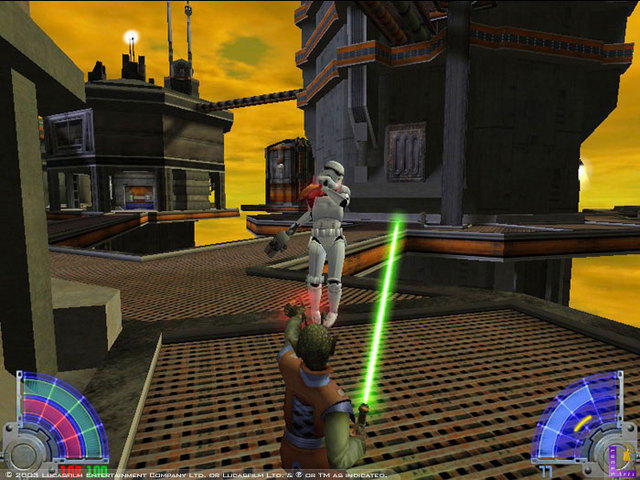 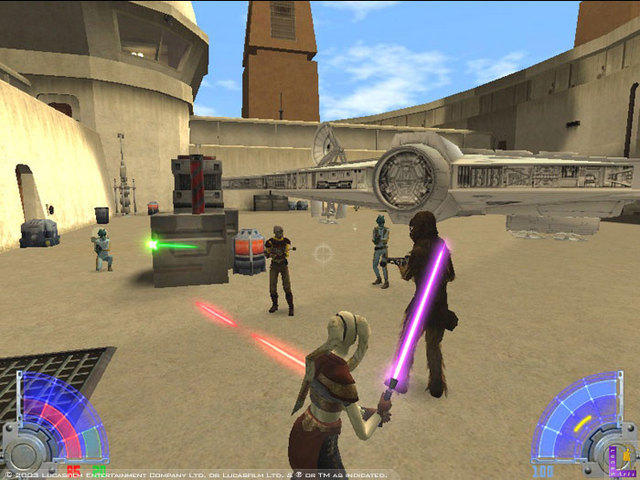 Welcome to Jedi Training at it's finest. Master Skywalker has set-up a Jedi Academy on the planet of Yavin, and you are part of the newest group of recruits.

After you go through character creation, the game begins. This creation process is very thorough, with many options that will enable you to create a truly unique character. Some of the things you will get to choose yourself include gender, race, and color scheme for your clothes.

The game consists of several challenging missions that help your character become a Jedi Knight, which of course is his/her dream. As the missions progress, you uncover a plot by the Disciples of Ragnos to steal force power and resurrect an evil Sith Lord.

Gameplay
This was a smooth game to operate, and it has many interesting gameplay features. The one that stands out the most for me is the ability to use many different vehicles or creatures that you can ride. Of course all of these were rides seen in Star Wars movies, but still excellent rides. They include hover bikes (much like Endor speeder bikes), AT-AT walkers, and even the ugly Tauntaun creatures from the ice planet Hoth.

The whole game is entertaining, and I found myself eager to follow the story and find out what this Ragnos group was involved in.

One of the outstanding features of this game is the lightsaber feats and acrobatic moves you can perform. You have some great main lightsaber attacks, and there is also an alternate attack in which you can lock your lightsaber, and throw it at your opponent. Your Jedi is extremely nimble, and he or she has the ability to execute some amazing moves, like walking up walls, and performing jumps that defy gravity.

A Star Wars game just would not be complete unless you can make a unique lightsaber that is truly yours, and Jedi Academy does not disappoint in this area. You get to build your own lightsaber twice during the game, once at the beginning, and once later on after you have lost the first one during battle. Some of the characteristics you will get to apply to your lightsaber include the color of the blade, and the style of the hilt.

The only flaw I noticed with this game, was that some of those jumps and moves that I mentioned earlier are hard to master. I used jump quite often, and found that if I just continued to move, and not stand still, than I had a better chance to survive the battle. But things happened quickly during the fights, and you really don't have time to try to make sure you are executing the right keystrokes.

Graphics
The graphics are fairly decent in this game. It was nice to visit some familiar Star Wars locations, such as Hoth, Tatooine, and a cloud city (much like Bespin). Besides the aforementioned Luke Skywalker, there will also be a few other familiar Star Wars characters. Some, like Chewbacca, will join you in battle, and others, like Boba Fett, will test your combat skills. The environments are richly detailed, and vary from outdoor battlefields to indoor military complexes.

Learning Curve
The mechanics of this game were not hard to learn. The tutorial was more or less included within the game, and not a separate menu option like you may see in other games. When you first arrive at the Academy, Kyle, the Jedi master that you are assigned too, guides you through an obstacle course. This obstacle course acts as your tutorial section, and covers force powers, lightsaber usage, and other things that you will use during the game.

Replay Value
There is not a strong incentive to play this game again, but I might still be inclined to someday. Two things come to mind that give this game a decent replay value. One being the diversity of characters that can be developed during the game. Between the initial character generation, force power development, and lightsaber creation, you can build a character that is uniquely yours. The second one was not really a big thing, but I still found it appealing. Sometimes you could find secret areas, and often they provided more ammo or medkits. I did not come across these areas very often, but that may have just been due to my lack of seriously exploring a location.

Sound
The sound was excellent in this game. As you might guess, it had authentic lightsaber and blaster sound effects. I enjoyed the music more than the sound effects. Of course the background music consists of familiar tunes that you have probably heard before in the Star Wars movies, but those classic pieces never lose their appeal. I did notice sometimes that a unique twist had been recorded onto these tunes, which made them familiar, but yet different as well. The voice talent was decent as well.

Even if you are not a serious Star Wars fan, I think you may still enjoy this game.
It is packed full of action, and has an engrossing story to follow.