Amazing album shines even brighter thanks to new vinyl reissue! 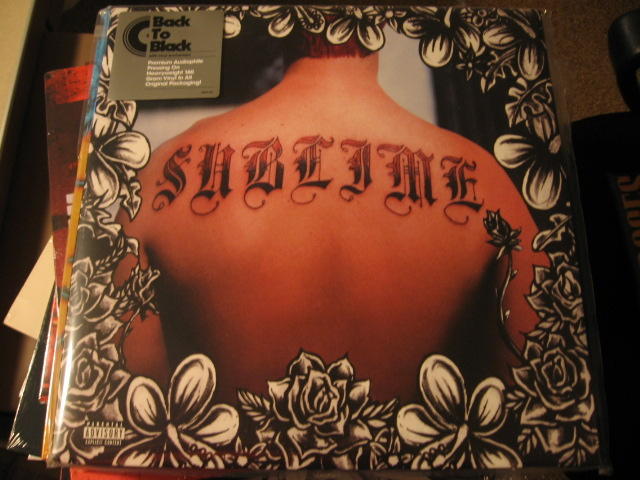 At a moment in time somewhere between 1996 and 1997, Sublime's self-titled major label debut was the Frampton Comes Alive for a generation of kids (at least at my high school in Western Washington). To quote Peter Griffin: "Who do you know who didn't have that record?" Starting with the extremely well-publicized death of singer/guitarist Bradley Nowell from a heroin overdose mere months before the record's release, followed by a string of edgy yet oddly very radio friendly hits pushed this album to reaches and stereos that I highly doubt anyone really thought it would reach, especially so quickly.

Despite its critical and financial success as a CD, the band's label MCA Records / Universal Music wanted nothing to do with a vinyl release, even though according to bassist Bud Gaugh "the band had desperately asked, begged and pleaded for one." With the vinyl rights being released to the band after the label failed to release their own record, a picture disc was released with the help of the band's friends over at 77 Records. With that sole vinyl release long out of print and vinyl's "resurgence" making waves in the desperate-for-cash major label circuit, the powers that be have produced this version that leaves me utterly torn on how to feel. Should I let the music do the talking and thinking for me and enjoy a record that I was only able to obtain second-hand? Or, should I view this release as a slap in the face to the band that created the record in question and just ignore it? Hopefully those who pick the latter will not hate me for picking the former, as the attractive gatefold jacket, full color dust sleeves and sonically pleasing 180 gram sounds were too powerful for me to repeal.

I won't kid anyone into thinking I have an ear for vinyl, as I do not, but I can pick up the difference between a vinyl record and my CDs/MP3s, especially since my setups for both are mediocre at best. Having listened to this CD countless times, it was a welcomed shock the moment the needle hit the record and the vastly improved sound erupted from the speakers. The bass is more profound, thumping in the forefront instead of hiding behind the other instruments. The drums and guitar parts are very clean and crisp, with each snare hit and guitar solo hitting as if the band were in the room with me. But where this version grabbed me with a monster grip was with the vocals. Brad's voice has never sounded better. Each word slips out of speakers with a haunting clarity. As I sit here and type this review with "Doin' Time" playing in the background, I get the feeling that if I closed my eyes, I would be transported back in time and hear Brad record these vocals in real time. There is no better example of this than the hip-hop break down at the beginning of the reprise version of "What I Got." Turn the stereo up loud, close your eyes and just let the song take hold of you and you'll see exactly what I mean. This is the power of music.

Looking back on this album over a decade after its original release, I am able to better appreciate the rough and raw side of the Sublime sound, even when those elements conflict with my musical tastes. "The Ballad of Johnny Butt," a song I was never a fan of to begin with, continues to stand out to me as a bland track that lacks energy and passion, despite a great chorus, and should have gone through additional rewrites to allow the raw, rough feeling to be a positive instead of a negative. Though it sounds as if it was given a better mix this time around than the original CD version, "Seed" still comes off as too wild and unfocused, something that its short length does not help. Nitpicking aside, the only real crime musically about this release is what cannot be found: none of the extra tracks from the 2006 deluxe edition CD were included nor was the original album sequencing restored. To ignore not one but both of those aspects of the deluxe edition seems to backup the "cash-in" claim, especially considering that "Doin' Time" was restored to its original version (previously appearing on the "Doin' Time" single as the "Bradley Version").

This CD had been collecting dust for quite awhile as I, naively, felt I had grown out of it years prior and only kept it around for nostalgia purposes. But this vinyl reissue has served as a reminder as to why I was so enamored with it upon its initial release. Sublime's amazing ability to be able to combine so many different genres - punk, hip-hop, funk, ska, reggae and everything in between - into their songs, sometimes all at once, in a whirlwind of creative and untamed energy is something that this reissue proves has not lost power over the years, but instead may have actually grown in prowess.
Review Page Hits: 0 today (242 total)
mediahook