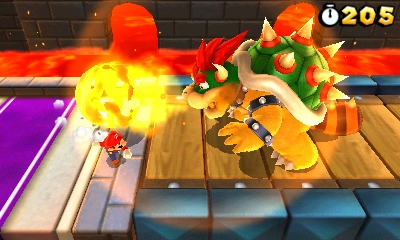 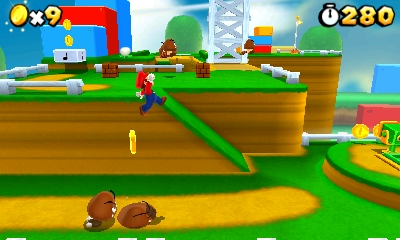 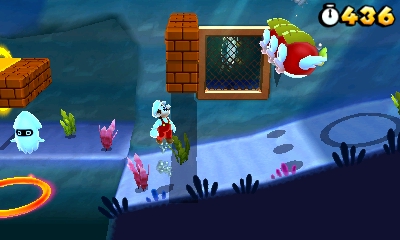 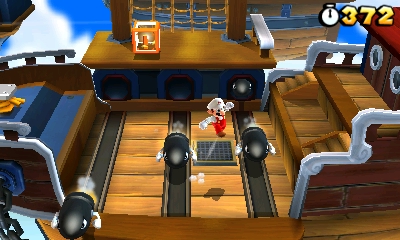 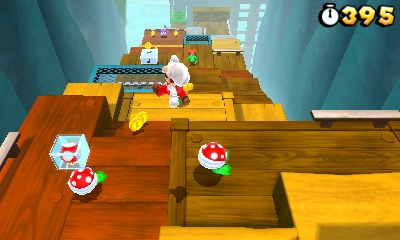 In the early years of the Nintendo 3DS, Nintendo was really trying to sell the idea of autostereoscopic 3D to the masses. Some games did this better than others. Some used it for an "ooh" and "aah" effect that was while cool, didn't really affect gameplay at all. However, there was one game in the 3DS lineup early on that really showed that the ability to perceive depth with the stereoscopic 3D of the Nintendo 3DS system could very much improve the gameplay experience. Super Mario 3D Land not only sold the concept of 3D well by implementing a great sense of depth to judge distances to jumps and platforms, but it also provided some visual trickery as well to impress.

A new handheld made Nintendo want to have players engage in a new experience with Mario. I'm not just referring to the usage of stereoscopic 3D to improve the gaming experience. No, I'm also talking about the structure, the very foundation of Super Mario 3D Land. Its levels are obstacle courses like the 2D games with very little room for the intense exploration found in the 3D Mario games, particularly Super Mario 64 and Super Mario Sunshine. In essence, Super Mario 3D Land is a mix between the 2D, fairly linear obstacle courses of the classic Super Mario Bros. line of games and the 3D movement more modern Mario games have possessed.

This new way of Mario was developed for the type of player who struggles with movement in 3D, the type of player that just couldn't get his or her head wrapped around controlling Mario in a 3D space like in Super Mario 64, Sunshine, and both Galaxy games. Instead of analog movement, Mario in Super Mario 3D Land has nine directions he can move. And instead of pushing an analog stick forward to increase speed and momentum, like the 2D games, a run button is necessary to hold down to provide Mario's quick movement.

Mario does not have the same wide repertoire of moves as he did in past 3D Mario games. However, for a game like Super Mario 3D Land, all of these acrobatic stunts the plump plumber could perform aren't exactly necessary. He can still wall jump, he can still perform a long jump (perfect for launching himself across long chasms as well as reaching the top of the flagpole at the end of a given level), he can do his well-known backflip, and he can do a side flip if you move the Control Pad in one direction and then quickly in the opposite while jumping. The controls might be more accessible to those learning how to play 3D Mario games with better fluidity, but by no means are they dumbed down to the point that veterans players will feel insulted.

Super Mario 3D Land features eight initial worlds played in a linear order. Unlike the 2D Mario games, however, there is no theme to a world. One level might be set in a grassland area while the next will have Mario leap his way through a winter wonderland. There's no rhyme or reason for the level locales, and while this great for not having to be stuck in a typical ice world with all ice levels, I do rather prefer the more unified worlds in theme. However, that's just a minor gripe I have with the game.

Like I said about the levels previous, they are obstacle courses. At the beginning of the game, you have wide open platforms and areas that don't offer much in the way of the danger of falling off them. As you progress in the game, not only does the challenge increase as platforms become narrower, but the tricks the level designers throw into the levels to trip you up increase as well. Levels don't take much time to complete at all, making for play-anywhere-for-as-long-or-as-short-as-you-like handheld convenience.

Levels aren't necessarily left to right affairs either. Many times you'll be moving away from the front of the screen into the background, really selling that 3D depth I was talking about earlier. One level is set in a forest, having Mario leap on horizontal ropes to bounce up the side of a tree (of course while avoiding enemies like fireball-spewing Piranha Plants and invincible Fuzzies). Another has Mario jumping on rotating box platforms in a sky setting, requiring careful timing and precision so he doesn't get carried off into the abyss below. Then there are artifacts from Super Mario Galaxy, such as the platforms that flip whenever Mario jumps, or beat block platforms that appear and disappear with the beat played in the level. Additionally, enjoyable levels and mainstays of the 2D Mario series such as auto-scrolling levels, airships, ghost houses, and lava-filled fortresses will require Mario's attention.

After the initial eight worlds of Super Mario 3D Land are completed, and the game is technically "beaten", as Mario engages in a confrontation with Bowser that is one of the best in the Mario series, a second set of eight worlds unlocks, Beating the first world's fortress unlocks the higher-jumping Luigi for play. The second set of worlds feature what are mostly essentially remixed levels of the first eight worlds. They feature harder challenges, new enemies, differently organized platforms, and other variances like having to rush through a level with a Cosmic Mario stalking you, where he copies Mario's movements, meaning you always have to be on the move.

Like the levels in the first eight worlds, the second eight worlds contain a collectible known as Star Medals. There are three of these placed in each level of the game, and many are hidden in some precarious locations. This is where an exploration aspect of Super Mario 3D Land comes in. Many levels have secret areas hidden off the beaten path, just outside of the player's view if they were just running through the level normally. Collecting these becomes mandatory for the second half of Super Mario 3D Land, as many of the later levels are locked behind these medals. If you don't have enough, you can't unlock these levels. This can be an annoyance if you haven't been collecting Star Medals throughout the game, because then you have to return to past levels to collect them. Not the most fun if your mind was set on continuing to make progress towards beating the game. That said, the Star Medals are fun to seek out and allows players to enjoy the level design even further, so why wouldn't you go after the Star Medals to begin with?

I was talking about artifacts from Super Mario Galaxy earlier. Well, there is also one from Super Mario Bros. 3, and that is the Tanooki Leaf, which turns Mario or Luigi into a Tanooki or Fox version of themselves. This allows you to slowly float down in the air after a jump, making Super Mario 3D Land's levels much more manageable. In a way, it's a means for beginning players to use this item to get through levels that they might not have been able to otherwise. At the same time, for veteran players, this is also a relatively easy way to cheese your way through most of the game, as you can skip otherwise challenging platforming sections with ease. While talking about power-ups, a new one was introduced in Super Mario 3D Land, the Boomerang Flower, allowing Mario and Luigi to don a suit like the Boomerang Bros, and use it to chuck boomerangs that return to sender routinely-- usually after smacking an enemy into submission. You can carry an item in storage as well, calling for it by tapping the center of the 3DS's touch screen.

Super Mario 3D Land will take most players not even five hours to beat the first eight worlds. Getting the second set of worlds complete adds a few more hours. However, you can't really call Super Mario 3D World completed until you get all five stars on your profile in the main menu. This is performed by beating Bowser once, beating all sixteen worlds then challenging and beating Bowser again, collecting all Star Medals, reaching the top of every level's flagpole as either Mario or Luigi, and beating the super-difficult final level as Mario and Luigi, unlocked by earning the first four stars and beating all levels as both Mario and Luigi. So, as you can see, there is a good deal of content to be had in Super Mario 3D Land. This can give you upwards of 15-20 hours, though my latest run-through was around 12 hours for five stars, but that was only due to familiarity.

There's a lot of beauty in Super Mario 3D Land. Sure, there's little time to take it all in when you're racing against the timer to beat each level, but just letting Mario's leg stretch out as you survey each environment shows an immaculate amount of detail for such an early Nintendo 3DS release. A particular pyramid level is an example where you wouldn't ordinarily even notice the insane detail of the pyramid bricks, chiseled with a complex pattern. Speaking of bricks, the rain-drenched bricks on the final tower you reach before facing Bowser in the final showdown are absolutely astonishing with their shimmering texture. I doubt I have to even go into how amazing the 3D effect of Super Mario 3D Land truly is. The game was built for it, allowing you to use two types of 3D, one that pops out the characters and environments while the other makes it so it's like looking into a box. In addition to the visuals, the music delights with a cheery and memorable main theme and other catchy tunes abound.

Replaying Super Mario 3D Land has made me realize that this method of Mario, mixing 2D progression with 3D movement is a master class of Mario design. While I'm not saying I don't want another "sandbox", open-ended design to levels in my Mario games, like 64 and Sunshine had, I am saying that this style of Mario game is by no means inferior. It's particularly catching and special, offering no nonsense gameplay and design that is perfect for the handheld format, and perfect for players of all skill ranges. I appreciate Nintendo attempting to make its 3D Mario games more appealing and accessible to those who are uncomfortable with the games otherwise. Super Mario 3D Land is an engaging 3D platformer from beginning to end.
Review Page Hits: 0 today (310 total)
mediahook