A solid place to start ones' GameCube library. The mini-games are fun but its not a "can't miss." 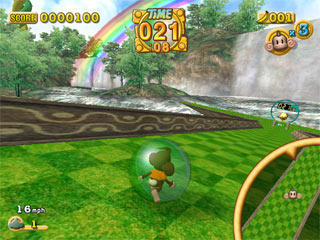 Super Monkey Ball is one of those titles that came pretty much out of nowhere. Due to its nominally interesting single player experience, wealth of multiplayer mini-games, and ultra cutesy/bizarre name and game play, it became a hit. Less than a year later Sega elected to follow it up with the aptly named Super Monkey Ball 2. For all intents and purposes, the game is a rehash of the same but with more, more, more. SMB2 essentially makes the original obsolete and at this point is the definitive version of monkey ball. Monkey ball involves rolling around one of the 4 monkeys available in the game. Each of the monkeys is entombed in a clear, bifurcated ball. When the monkey runs, the ball rolls. If you want a quick taste check out the mini-game in the "links" section of this review, it's representative of the main game. SMB2 is broken down into single-player and multiplayer/mini game modes. In this case, it's worth splitting the review to cover both since each experience is distinctive.

Single Player: Basically this is marble madness ramped up and brought into the 3rd dimension. Rather than an isometric view, you are now behind the ball and slightly overhead. You "roll" the ball by pressing in a direction. Most of the levels involve some sort of puzzling obstacle, a precarious edge that is easy to roll off, or a serious time restriction. Many combine the 3 in interesting ways. Each of the 10 levels is divided into 10 puzzles or mazes. In addition there are a bunch of extra levels (perhaps 40), which are available after completing various tests of skill (such as making through a wave of 10 stages without a death or without a continue). The camera is pretty solid, though I find the whole single player experience pretty uninteresting. What can I say, if you get into this, I can not help wondering if you shouldn't be playing something different (assuming your time is limited). The graphics are simple, but suitable. The music is fairly nondescript but also serviceable. The story which loosely - and I do mean loosely - explains all this rolling around is truly horrible. In fact the story is so horrible it succeeds only to the degree that it wraps around to the other side of implausible and becomes sort of amusing in its absurdity. If this were the entire SMB experience the game would get a C-.

Multiplayer / Mini-games: The original SMB contained 6 mini-games. These have returned, with slight enhancements, in addition to 6 new mini-games. These mini-games vary in quality but most are better suited to multiplayer mode. An interesting question to ponder: "When is a mini-game more important than the 'main' game?" Most people that buy SMB2 will find that their opinion will be driven by how much they like the various mini-games rather than the main quest. The 12 mini-games are:

Monkey Race - a scaled back kart racer that is most fun with 4 players. This is super fun, but there are only 6 courses so it can get pretty tiring. If you have Mario Kart this game will be redundant, if not it might be enough to fill your need for a kart racer. Frankly I probably play it more than the single player game. Race mode is especially good with 4 people but can be played single player.

Monkey Target - As in the original this game involves hurtling your monkey off a ramp and opening his bubble mid fall to create a pair of wings. You then balance altitude and speed against ambient wind as you steer toward a target on the course. The target has a bull's-eye as well as declining point totals as you move away from the center. Each target is surrounded by water. When you get over the target you collapse your bubble and fall straight down thus, hopefully, bulls eying the target and collecting points. In contrast to the first SMB, here all players are on the course at the same time, and thus they compete for the same help items and points. It makes the experience quite a bit quicker, but I find the actual targets to be a little lamer. Still this is a high point of the game. Id love a 20$ game of just this with many more targets. There are only 4 courses available so again it gets old.

Monkey Fight - A scaled back 4-person brawler like Super Smash Bros. Melee. You basically run around trying to use your spring-loaded punch gun to knock competing monkey balls out of the ring. It's pretty frenetic and there is some strategy involved but it is only fun with at least 3 players in my opinion.

Monkey Billiards - A scaled back pool game pretty standard pool, though you have a greater number of options vs. the first SMB version of 8 ball. I personally grew tired fast.

Monkey Bowling - Again a decent but unspectacular bowling game that really ramps up the feeling that you are playing a kids game.

Monkey Golf - A pretty decent game of putt golf. Imagine Mario Golf or the manifold from Hotshots part 3, but obviously scaled back. It is fun to watch your monkey tee himself up though. The number of courses is again very limited.

The following are new additions that are unlocked as you progress:

Monkey Boat - A fun addition that expands on the kart feel of monkey race but in boats. You paddle by using the shoulder buttons. This feels a lot like the old "Toobin" game, which I'm a fan of.

Tennis - A decent game of tennis that plays quite a bit like Virtua Tennis or Beach Spikers but obviously with less depth. Still its one of the better mini-games here and is pretty solid in 4 player mode.

Baseball - This is not baseball at all but some weird pinball form of baseball where you direct your monkey to hit the ball over different ramps. Its sort of like baseball meets Pachinko, definitely different but also pretty bad.

Dogfight - A 3rd person rogue squadron type game with you "red baronning" your way against other monkeys. It gets tiring and the computer is a dead-eye. Its definitely a poor mans shooter but it can still be fun especially with 4 players.

Soccer - Like baseball, this is barely the same game as its namesake. The best of these mini-games seem to implement scaled back versions of their full sized game brothers while others like soccer and baseball seem adventurous but ultimately lame. If you've played dome hockey with the dudes on sticks, that's pretty close to this game of "soccer." In fact they should have just made it more like foosball. It is sort of a failure again.

Monkey Shot - A very unremarkable shooting game set up arcade style with moving cursors. It's really lame in 1 player. In multiplayer it can be a bit more fun. Still, its pretty much Duck Hunt without the gun... sound like super big fun? I didn't think so.

So in the end we have a not so compelling single player experience followed up by a bunch of fairly derivative or unsuccessful multiplayer games, so how in gods name does this thing get a B? Well its like this, in a similar way to Warioware, none of the games is especially good on its own, but the sheer volume makes up for it. While it is doubtful that you'll spend more than a few hours on any of these games, its equally unlikely that you wont be drawn in by at least a few. Sure you could buy: Super Smash Bothers Melee, Mario Golf, Mario Kart, Beach Spikers, and maybe Time Splitters or Rogue Squadron and end up with FAR more complete games, but here is a way to get a sampler plate all at once. If you own those other games ultimately I think SMB2 is skippable. The main game will appeal mostly to fans of oddities or those who really loved marble madness, and I have to feel these people are limited in number. The multiplayer games will be fun for a while but eventually lose their charm (fast lose their charm if you cant stand "kiddy" games). Still SMB2 has an odd charm. Ultimately, while none of the segments stand up particularly well on their own, as a whole SMB2 is a solid purchase that is full of monkey charm.
Review Page Hits: 0 today (531 total)
mediahook