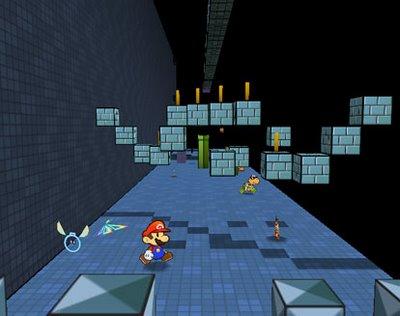 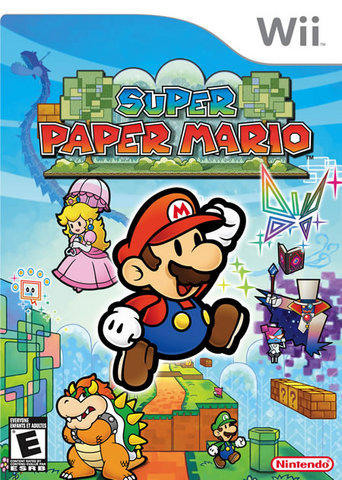 Super Paper Mario is one of the worst Mario games I have ever played.

I realize that it is cruel and sounds very skeptical to start a review off like this, but I'm afraid it's the truth.

The characters (besides Mario and the gang) are so un-Mario, that I feel like I'm playing some lame knock-off. Merlon may be the only one who resembles something Mario-esque.

The story is kinda lame, about worlds ending. (Surprise, hello Kingdom Hearts, and a bunch of other games that have done this before) It doesn't really go anywhere, and there is no real threat, because all of the enemies in this game seem like they don't really care if they screw something up. I can safely say the developers had the same state of mind. Count Bleck is probably one of the lamest Mario bosses/enemies ever, and fighting the same boss 3+ times (O'Chunks) with no new strategy, especially when he's no stronger any particular time, no new moves, etc, gets a little old.

There are a bunch of parts that REALLY made me upset, like all the parts where you had to do something repetitive for an insane period of time:

1.) In one of the first stages, running on the hamster wheel so you can gather a certain number of coins, or something. I put a rubber band around the D-Pad on my WiiMote and walked away for 10-15 minutes. And this is an essential part of the game, too.

2.) Fighting the Sammer Guys. Seriously? Each one needs their own room? You walk up to the pedestal, fight one, which takes no longer than any other enemy in the game, have them talk to you, and then go through the next door for another one? 25 times in a row?

3.) When the one world ends, walking through the empty white space for about 6 minutes straight until you stumble upon the Pure Heart. C'mon. It's funny when it takes maybe 30 seconds, but 5-6 straight minutes of walking?

I swear, half the time it took me to finish this game was made up of stupid stuff like this.

One last thing that really bothered me, is how the developers flat out smothered the game with Nintendo references.....like with some names of the Sammer Guys, and level designs, and characters saying "remember me from this? or, you might recognize me from somewhere!" It's a joke. If they put them in ever so subtle-like, it would be a neat thing to pick out. But when it's shoved in your face, there's no need for intelligence or fast-paced brain power to have to catch anything.....which is what WOULD have made gamers say "Ohh! Yeah! I remember that! Hah, cool!"

Overall, a game, which, with all the powers, and features, could have had potential.

When you add rainbow Pixls and butterfly versions of Navi, and lame enemies, you lose all the good in your source material.

The soundtrack and sound in the game was decent. Some of the music was pretty good, nothing really jumped out at me. Some of the sound effects got a little tiring, and the noise it made with the scrolling text gets on your nerves after a little while of hearing it.

As far as controls go, I wasn't fond of the fact that the developers kept it a "Paper Mario" title, and still used controls like these. I don't like traces of platformer in my Paper Mario just like I don't like onions in my cereal. The line separating Paper Mario and Super Mario was kind of blurred here, and it seems like the controls were blurred to the same caliber. In my opinion, mixing two good things like chocolate and cheese is no good. Why mix two good things here? The basic point I'm trying to make: "If it ain't broke, don't fix it."

Even though it may seem incredibly skeptical of me, I'm giving this game a C.
I'm just glad I finished it. Time to never play it again.
Review Page Hits: 0 today (233 total)
mediahook