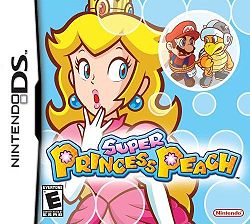 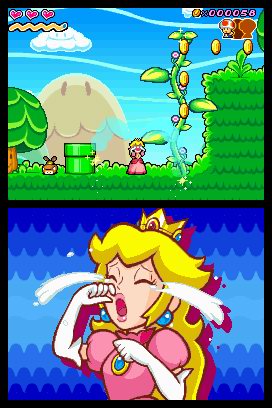 Have you ever thought to yourself, "Gee, I like Mario games, but I wish they were easier and much cuter"? If so, Super Princess Peach is the game for you. This game is so cute, it makes me want to gouge my eyes out. But I still played it because, well, it was pretty fun for awhile.

This game plays very much like a Mario game (with a fire world, ice world, beach world, etc.) with most of the same enemies (goombas, bullet bills, boos, etc). The difference is that Peach has mood abilities (I'm not making this up). She can be happy and gain life, sad and cry and run really fast, a different kind of happy that lets her float, and angry which turns her into fire and allows her to stomp on things.

The ability to fly and/or float and regenerate lost health makes this a pretty easy game, but even worse than that is YOU CAN'T DIE! If you fall to your death (which is really hard to do), Peach will go back to an extremely generous checkpoint and lose half a heart a la Zelda. Even if you suck ass and manage to die, it doesn't matter, because you don't have lives. You just start the level again. Don't worry though... I managed to get through the whole game without dying once. I only tested this after the game was over to see what would actually happen if I died.

Coins are collected to buy things like abilities, mini-games, puzzle pieces, & some pointless sound effects. This is actually pretty cool, and I wish future Mario games would include something like this. There were only 3 mini-games, and they were pretty poor, especially compared to all of the mini-games in NSMB. Also, one of the games requires you to blow into the DS microphone to make the toad jump. I felt like a moron spitting onto my DS screen to get the toad to jump farther.

My biggest problem with the game though, and the reason I gave this a 6 instead of a 7, is when I got to the last boss, the game wouldn't let me do the last level before collecting all of the hidden toads (there are 3 toads per level that you need to find, kind of like the 3 stars in the NSMB series). Towards the end of the game, I started speeding through levels because I was getting bored, but in order to beat it, I had to go back and scour the levels for these stupid hidden toads. That REALLY pissed me off.

As for the graphics, they are pretty nice although not very detailed. Think Super Mario World with even more detail. The sound is fine as well, although the music can become very irritating due to it's cuteness.

The replay value is basically what you make of it. You need to find all of the toads to beat the game, so once you beat it, there really isn't anything left to do except for the mini-games (or play it again). There are only 3 mini-games, although there are many different levels for each one. They are fun for a few minutes, but nothing to keep you coming back.

Overall, it was pretty fun, and I would recommend it to anyone looking for an easy-going 2D platformer on the DS.
Review Page Hits: 3 today (363 total)
mediahook