Why the heck would anybody want something as bad as this? 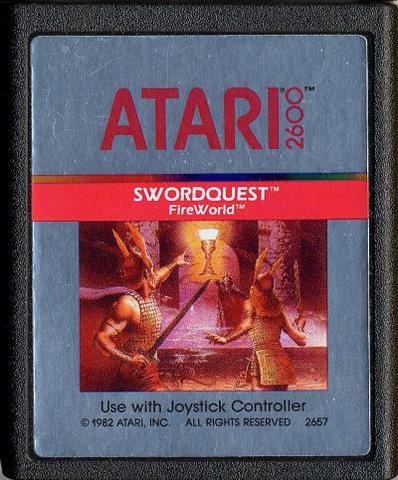 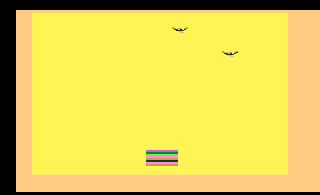 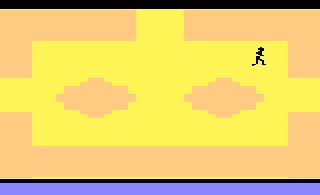 How in the world could a game come off so bad? This is what probably many people who own this game are thinking. This was supposed to originally be a four game series. One Swordquest game wasn't even finished and another was released in extremely limited quantities. All of the released games were junky and this is the worst of the three games.

Where can I start? Let me start with the terrible graphics. For an Atari VCS game, this is even worse than the installment of Swordquest: Earthworld. At least in that game the character had some sort of color (blue sweater and green pants). In this game your main character is made of the solid color of black. The mini-game challenges have graphics that are even worse. In one mini-game, it looks like you are shooting birds with a pen. In another mini-game, it looks as if you are a pencil avoiding pens. These graphics really have a fantasy theme in the medieval world (NOT!).

The game gets to its absolute worst when you get to some of the worst gameplay one has ever seen. The design of the game is just a bunch of rooms with some type of blocky object in each room. Strange bugs plague the game, like moving to the upper-left corner of the screen makes a weird noise which takes you to another room of the game. You are supposed to have the comic book to understand the game, but most people don't even have the comic book. The items are totally useless and have nothing to even affect the gameplay, (except for that one item that will take you to any room in the game, wow!).

If somebody seems to be enjoying this game, ask if something is wrong, because this game is so painfully bad. It is rumored that the creator of the game (Tod Frye) was under the influence of drugs, and it shows. Even his previous game (VCS Pac-Man) was better than this terrible creation. This is one of many lousy games of the Atari VCS lineup that caused the great video game crash of 1983. The lesson that we have learned today is that if you want to make a video game someday, the game needs to make sense, or else nobody is going to buy your game. In the words of Dave Mrozek (a critic for the videogamecritc website) "This game is one of the absolute worst, and should be the object of much ridicule".
Review Page Hits: 0 today (146 total)
mediahook