The best TMNT game out there. It's like watching the TV show, but you're playing it instead. A classic side-scroller. 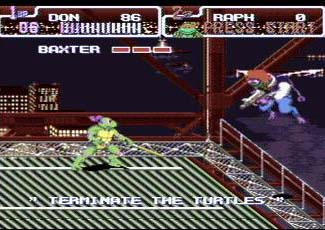 The evil Shredder is up to no good as usual. This game was the first TMNT game to hit the SNES. It was actually a coin-op arcade game that made its way to the SNES console. And guess what, it didn't flop!

This game has beautiful 3D graphics and is by far a game that really shined on the SNES. There were a few changes from the arcade version, but that didn't hurt the game at all. They made a few voice-over changes and they added a new level. The graphics for this game just really impressed me.

Graphics:
The graphics were outstanding. The game made it's transfer from the arcade to the console without a hitch. Some nice features made the game impressive. I liked when you would pick up a foot soldier and throw them, they would actually look as if they were coming straight at you. Nice 3D animation there. The turtles looked great and were very detailed, considering it was on a 32-bit system. I also liked the cinematics that played throughout. Although they looked cheesy, I still found them entertaining. None the less, the graphics really surpassed expectations concerning the jump from arcade to console.

Sound:
Great sounds made this game even better. I love the voice-over work that is done at the beginning of each level. I believe the sound guy from the actual cartoon had something to do with the voice-overs. For being a cartoon-based action/fighter game, they did good work with the sound.

Gameplay:
The turtles find themselves trying to return the Statue of Liberty that Shredder has stolen. They end up traveling through time to locate him and return the United States' symbol of freedom. Each level pits you against some pretty big bosses including Baxter, Bebop and Rocksteady, Takka and Rhazar, Slash, Leatherhead, Krang, and of course Shredder. But in order to get to these guys, you must safely make it through each level fending off Shredder's cronies, the Foot Clan. Collect pizza to restore health, use manhole covers as weapons, surf on hoverboards, and do whatever it takes to get the job done. There are 10 levels you must pass in order to win back the symbol of freedom. The best part of this game is that you can play with a friend and go through the story mode.

Overall:
This game has excellent replay value. I wouldn't have a problem now popping in the game and playing it with a friend. It's an instant pleaser, so give it a try. I promise you wont be disappointed.