Eel's heart and soul bears his all in this painfully beautiful nostologic trip through the ups and down of a troubled life. 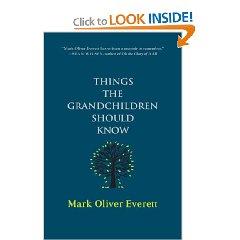 Father's death. Mother's death. Sister's death. Cousin's death. Friend after friend's death. Loneliness. Depression. Mark Oliver Everett's life has been filled with pain, loss, and suffering - yet he is a successful musician and front man to the successful band, Eels. His friend had been encouraging him for years to write an autobiography of his tragic life, and finally, E did so, and fans of E and the Eels, be glad.

Hugh Everett III, a world famous physicist (who is the subject of the BBC documentary "Parallel Worlds, Parallel Lives") fathered Mark Oliver Everett, aka "E", aka the Eels' frontman. As a child, E became interested in music and as a teen he filled his free time writing songs and playing in bands. After finding his father dead on his bed at age 19 and living through death after death, he turned to music wholly as an escape. He eventually moved to California, where he got his big break and began his adventure in the music world.

Things the Grandchildren Should Know is a great, quick read for any Eels fan. He writes as if he was talking directly to you, telling it just like it was. He explains how he got through the tough times of losing his entire family, and how he came about writing some of his best and most-loved songs. He writes the entire book in a no-BS style, which is refreshing. He delivers the most painful and earth shattering news in a matter-of-fact style. You really get an insight into his mind and how he processes things, and with this, you may see some of his songs in a different light.

If you love E and the Eels, this is definitely a book you'll want to check out.
Review Page Hits: 0 today (732 total)
mediahook