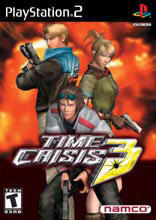 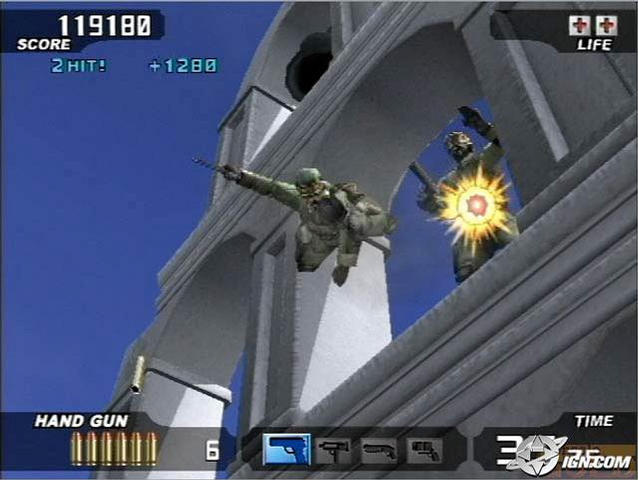 Time Crisis is a series synonymous with the genre of first-person light gun shooters. The series has done very well in both arcades and on consoles due to the fact that it's a generally unique idea that other games are starting to rehash using different themes. The idea of being able to duck and hide while your enemy pelts you with round after round of ammunition before having you pop out and bust a cap in them (or 20 if you're using the newly added machine gun) gives Time Crisis 3 such an original feel and puts it above any of the other wannabes.

The story begins where the VSSE, a tactical group in which the two protagonists belong, are sent to the remote island of Astigos located in the Mediterranean Sea. The island has been taken over by General Giorgio Zott, commander in chief of the Zagorian army. He has set up a missile system on the island capable of launching strikes against nearby Lukano and other Mediterranean countries. It's up to these two to stop the whole army.

Although Time Crisis 3 still sports the same look and feel of previous installments, the employment of weapon variety gives it an edge over the former games. By simply pressing the trigger while in the hiding stance, you can switch between a machine gun, shotgun, grenade launcher, or the ever-so-trusty handgun. Ammo for the handgun is unlimited but the same can't be said for the sub-weapons. Special enemies clad in yellow are mixed in with the Zagorian army that provides you with ammo when successfully shooting them. Because each enemy can be shot up to three times (with the exception of some that have life bars), it's best to shoot the yellow enemies three times to attain the most amount of ammo held by each.

The two-player mode is god-awful in Time Crisis 3, unless you can link up with another PS2 via the firewire port. The television screen is divided in half although a lot of detail is removed because of the proportionality of the screen. Some games in the past have had a problem with echoing when linking up via the firewire port but when I tried it with some buddies, there was no problem at all with Time Crisis 3. The sound was right on the money.

The soundtrack of Time Crisis 3 can be compared to that of a nice shooter flick from the late '80s. It keeps the pace moving fast with enemies popping out everywhere just waiting to be blasted. Explosions are EVERYWHERE here. When the main characters aren't being thrown around by gas tanks and trucks being blown up, there are objects in the background being blasted.

The light gun is definitely a must-have if you're going to play Time Crisis 3. The controller just kills the experience of playing this game. I've played through the game with both the Guncon and the regular Dual Shock 2 controller and there's a definitely a difference between them. One thing to make clear though - light guns aren't compatible with LCD or plasma TV sets. Thanks to the kind, intelligent workers at Gamestop who told me it did work on LCD TVs and had me messing with my TV and the gun's connections for an hour before I decided to read the box's fine print and find that it doesn't work at all.