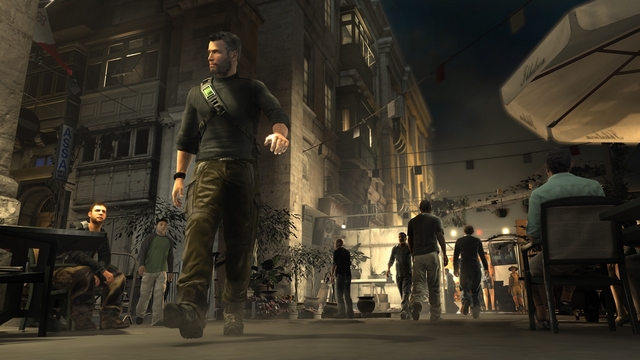 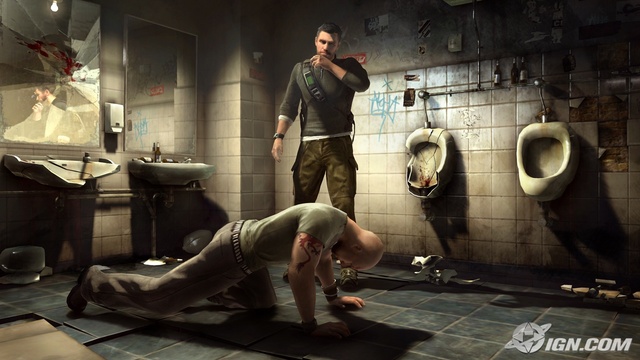 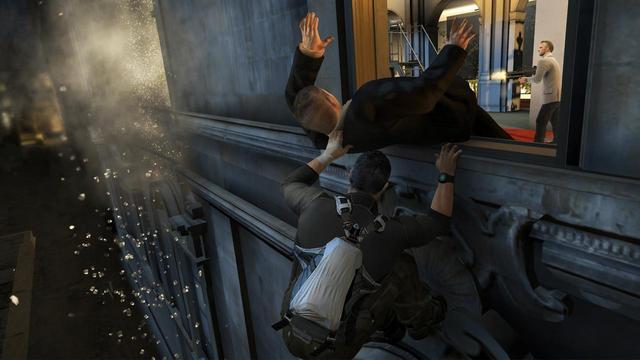 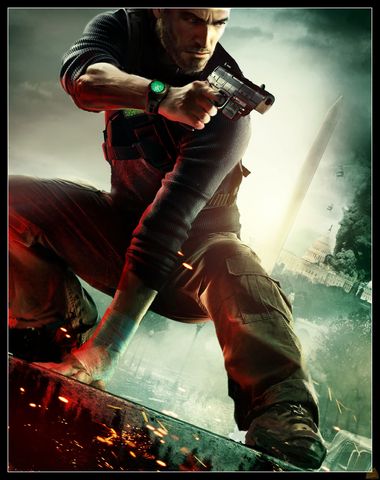 It has been nearly four years since we last saw Sam Fisher and since that time, Fisher has seen his fair share of tragedy and downfalls. His family is gone, the only people he ever trusted are dead and the entire country is looking for him. This isn't the same Splinter Cell game that fans will remember, Fisher is more dangerous, and his thirst for revenge fuels everything he exemplifies in Conviction. Gone are the sneaky, silent deaths, instead replaced with loud shootouts and revenge kills that can give Fisher the advantage of one shot deaths. The campaign, although frantic and expertly paced is over before you know it, but the co-op mode is worth sticking around for, as it is hands down some of the best cooperative action you will have in some time.

Conviction begins nearly two years after the events of Double Agent, with Fisher on the outs from the organization he once trusted searching for clues about his daughter's murder. Fisher is out for revenge, and from the very beginning you will notice a different breed of rage churning inside Fisher that encapsulates everything from his fighting style to his dialogue. Fisher no longer knocks people out, instead he simply kills anyone in his way to the truth, and the story will follow Fisher's journey as he discovers secrets that circle all through the branches of the American government.

The story is one of the finer aspects of Conviction, as a surly narrator recounts the events of Fisher as he makes his way to the ultimate showdown. The pace is spot on, with missions that require Fisher to not only remain silent but also sometimes cause as much destruction as possible (if only as a means of distraction to escape). Whatever the situation, know that Fisher is ultimately adept at handling even the toughest odds and his new interrogation techniques are a nice break away from the constant action to help advance the story.

Interrogation techniques are a way for Fisher to learn key aspects to clues about his daughter. These are unmissable throughout the story so you never have to worry about missing these fun beat-em-ups. However, the way you go about interrogating enemies is just one of the cool aspects which will have some players replaying to try out new scenarios. When these interrogation sequences begin, Fisher grabs the enemy by the neck and can casually walk around a given area interacting with various objects around him. Once you are in front of a given object you can force Fisher to interrogate info out of the enemy in which case Fisher usually bashes an enemy's head through a television, punches him through a sink or in an even more gruesome manner, grab a knife and stab an enemy's hand to a car, rendering him useless and in a lot of pain.

These interrogation segments are quite fun to perform as they make you feel like a super bad ass, however, it is a shame that there are only so many things you can bash an enemy into. One level had Fisher interrogating an enemy in a penthouse suite, yet he only had access to about three items to interact with. With such a wide array of options to choose from, it was definitely heartbreaking to not be able to use the entire layout to perform truly devastating interrogation techniques.

When Fisher is not interrogating enemies he is usually off finding clues to his daughter's death and that typically involves dozens of enemies standing in his path. Fisher is no slouch when it comes to fighting, so naturally you never really feel like you are outnumbered walking into a firefight by yourself against dozens of armed soldiers. Fisher has access to over twenty different guns, all of which do their jobs accordingly. But what makes Fisher so deadly are his arsenal of gadgets, remnants of his time with Third Echelon. Using these gadgets, Fisher can throw flash bangs, frag grenades, EMP grenades and even sticky cameras which you can use to lure enemies to and then explode in their faces. Creating diversions is a fun way for Fisher to gain the upper hand, and taking advantage of your assortment of goodies never has you feeling like you are fighting to survive in any firefight.

But if there is anything the Splinter Cell series is known for, it's being silent and sometimes Fisher must use his surroundings to take out higher classes of enemies. Although fighting in most levels doesn't involve climbing to upper areas, the levels that do make the action even more exciting. Fisher can climb poles to perform aerial takedowns, hang from ledges for deathly pulls and even perform hand to hand takedowns during moments when enemies sometimes get too close. Unlike other Splinter Cell games, these hand-to-hand takedowns actually are more necessary than firing your weapon as they give Fisher the ability to use Revenge kills, an advantage that lets him mark enemies and kill them with one shot. It definitely is a great strategic twist to the game, forcing players to decide when to engage in hand-to-hand takedowns or to waste their potential life-saving Revenge kills.

New to Conviction are also weapon caches which allow Fisher to reload and change weapons in the middle of missions as well as upgrade to earn new stats. Performing certain skills, such as aerial takedowns, grenade kills and marksman headshots give you points which are used to earn new abilities. There are three sets of skills for you to partake in throughout the campaign and co-op modes, and the wide range of ways for you to take out enemies not only increases the diversity of how you can take them out, but also gives you the points needed to max out your weapons. Weapons can be fitted with silencers; reload and aiming capabilities as well as added Revenge kills, adding your ability to hold more in one go. The way you take out foes and decide to upgrade your arsenal is a completely new and exciting way to enjoy the Splinter Cell series.

Even with all of the fun of interrogations, gadgets and silent killing the campaign lasts only about seven hours and just when things ramp up near the end you are tasked with the ultimate ending and left wanting more. Thankfully co-op mode fills that void as there are plenty of other exciting ways for you to get the most out of Conviction. The most standard co-op mode allows two players to eliminate enemies at once; performing dual takedowns has never been so satisfying, with the two of you working together to finish the level. However, a moment when one of you is captured or downed becomes intense as the second player must save the helpless victim while still avoiding the enemies surrounding both of you. Its frantic, fast paced action coupled with players' abilities to feign death (to avoid enemy suspicion) and perform dual Revenge kills to wipe out a room full of five or six enemies at once make this co-op a must-play.

The other modes, although fun, aren't as exciting and adrenaline filled as standard co-op but each offers their own style that players will be lured towards. Hunter mode has both players working together to take out enemies as quietly as possible. If an enemy gets alerted, more rush in making your fight to the finish even more dangerous. Last Stand is Conviction's version of Firefight from ODST, where both players must fend off wave after wave of enemies who are set on destroying an EMP reactor. It gets truly frantic in the later stages when you are trying to remain alive while avoiding enemy gunfire and stopping them from blowing up the EMP reactor at the same time. Use of dual takedowns and silent kills make these two modes great co-op modes for players looking for a quick rush. Face-Off mode is competitive co-op where both players start on opposite ends of the map and rack up points killing enemies before turning on each other. It's fun to use your gadgets and skills to take down another human player, but the lack of Revenge kills and hand-to-hand takedowns is quite a bummer.

Conviction does look well by today's standards, especially the lighting mechanics, but you still can't help but notice how dated some of the interior levels look. Many of the later levels involve Fisher traversing through office corridors and barren hallways and probably one of the most infuriating moments of the single player has Fisher navigating through a laser grid using only his sonar goggles, a feat that is marred with fuzziness around the screen and weird streaks of light that are often blinding. Still, with these faults, Conviction still looks pretty solid. The levels around Washington DC all shine, especially the carnival level which can see Fisher using every vendor and ride as a hiding spot. The details in the interrogation scenes are also very realistic, albeit a bit scaled down in size. The sound is nothing to write home about but Fisher's new scruffy, deep voice fits perfectly with the mood of the game and the narrator always brings a sense of what the upcoming level is pitting you up against. Enemies sound alike, some other minor characters have shaky voices, but that is common in most games of this genre.

Splinter Cell: Conviction may have been delayed a few years, but the wait has well been worth it. An exciting campaign, sweet Revenge kills, bad-ass interrogation sequences and an incredibly addicting co-op mode make Conviction one of the best Splinter Cell titles to date. Fisher may be frazzled but he can still kick plenty of ass and fans will no doubt love the journey they will take along with Fisher and the dozens of fun ways to dispose of enemies along the way.
Review Page Hits: 0 today (448 total)
mediahook