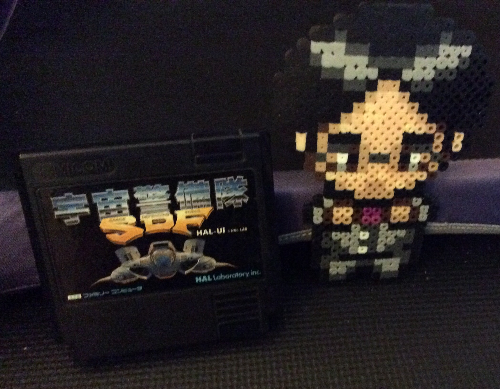 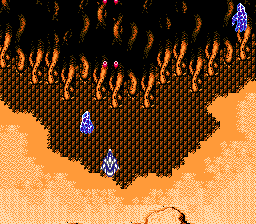 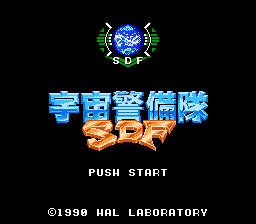 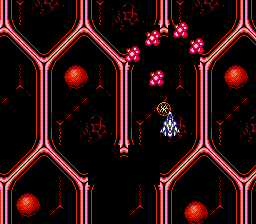 Uchuu Keibitai SDF was released on the Famicom in 1990 by HAL Laboratory, and never saw a release outside Japan. While we can speculate all day long on why this and many other unique relics of the 8-bit era didn't get localized versions, let's just focus on why I think this one of many lesser-known games from Nintendo's right-hand band is worth playing.

DISCLAIMER: I did use cheat codes to finish the game. There is only so much of a beating I am willing to take.

Graphics: Wow, this game is gorgeous. HAL is well-known for its technical achievements over the years, making the most of any platform they get to play with, starting with the Famicom/NES. Working on games like UKSDF helped them build their chops for gems like Kirby's Adventure. Being a late-ish game in the FC lifespan, it benefits from improved graphics chips and programming.

Music: The music is great and non-repetitive (boss music is really the only repeat music here, but that's OK). It helps each level transition seamlessly one to another... perhaps a little too seamlessly. Aside from the screen going dark and a big robot/creature/robot-creature-thing appearing from the top of that screen, sometimes it's really hard to tell if you're about to make it to the next stage.

Experience: The bosses (if you make it that far) aren't terribly difficult starting out. It's getting to them that's the real challenge. This is where the nightmares begin.

Claustrophobes beware: UKSDF can start you in the wide expanses of space in one level where you are fighting for your life against hordes of enemy vessels, then shove you into a teeny-tiny corridor in the same level. With significantly less room to maneuver, the difficulty spikes... adrenaline rises... screwups occur much more often. When (not if) you lose a life, you are hurled back to the beginning of whatever section you're in. If you haven't beaten the mid-boss, this is usually the start of the level. All powerups: gone. Harsh.

Speaking of powerups: there's a nice variety to be had in UKSDF. Without the manual (not like it'd help anyway - I can't read kanji), I'm not really sure what some of them do. When you pick up a capsule, 2 little red pods can attach to your ship. You can move them to the front or back with A. In the front, they give your main weapon a sizable boost. In the back, they shoot homing missiles. The "H" capsule gives a spread shot, nice for the open areas. The "L" capsule gives a laser. The "V" capsule gives a side-shot, which is great for taking out enemy turrets in hard-to-reach places. Knowing when to pick up certain powerups is the key here. The pods can also take a hit for you. However, your missiles (or weapon boost) will go away if even one of those pods is destroyed. Did I mention this game is harsh?

Later levels get really dark, cramped, and kind of creepy, as the Giger influences rear their ugly heads, and claws, and tentacles. If the Alien movies had you running for cover as a kid, level 3 and beyond of UKSDF may take you back to those days. Life Force is my favorite "creepy" NES shooter, with its monstrous-looking environments and all manner of creatures trying to blow you out of the sky. UKSDF takes this creepiness up to 11. Play this with the lights on.

Overall, UKSDF is a very interesting B-side of HAL Laboratory's back catalog. It's fun, but can be frustrating for people who don't live and breathe "shmups". Its aftermarket price tag is on the high end, even cart only, but I recommend it to anyone with a love of 2D shooters and a desire to see how the genre (and HAL Laboratory) have grown over the last 35 years. If this came to 3DS (or insert-new-Nintendo-portable-here) Virtual Console, I'd buy it again, no questions asked, if for nothing else than to play it on the go and abuse the save state feature.